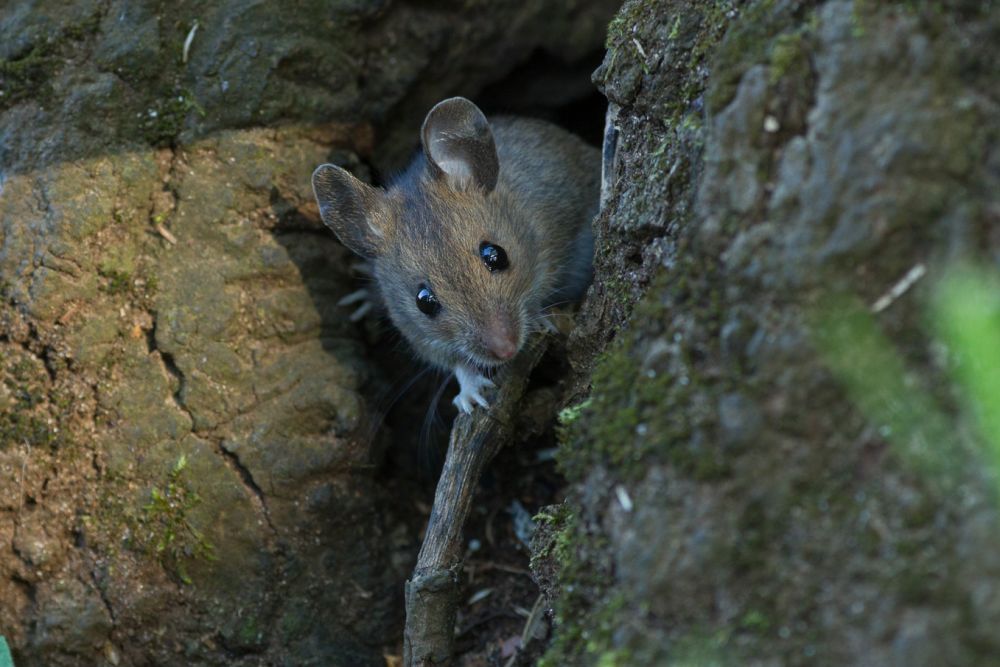 A small brown creature scurries across your path or you might even enjoy a longer view of one under the bird feeders, but which of our rodent species is it, a mouse, a vole or a rat?

There are several species of mouse and vole in the uk and they can be easily confused. Young rats also can add to the complication. This quick guide shows which of the most common species you are likely to see. We’ll start with the most likely candidates. 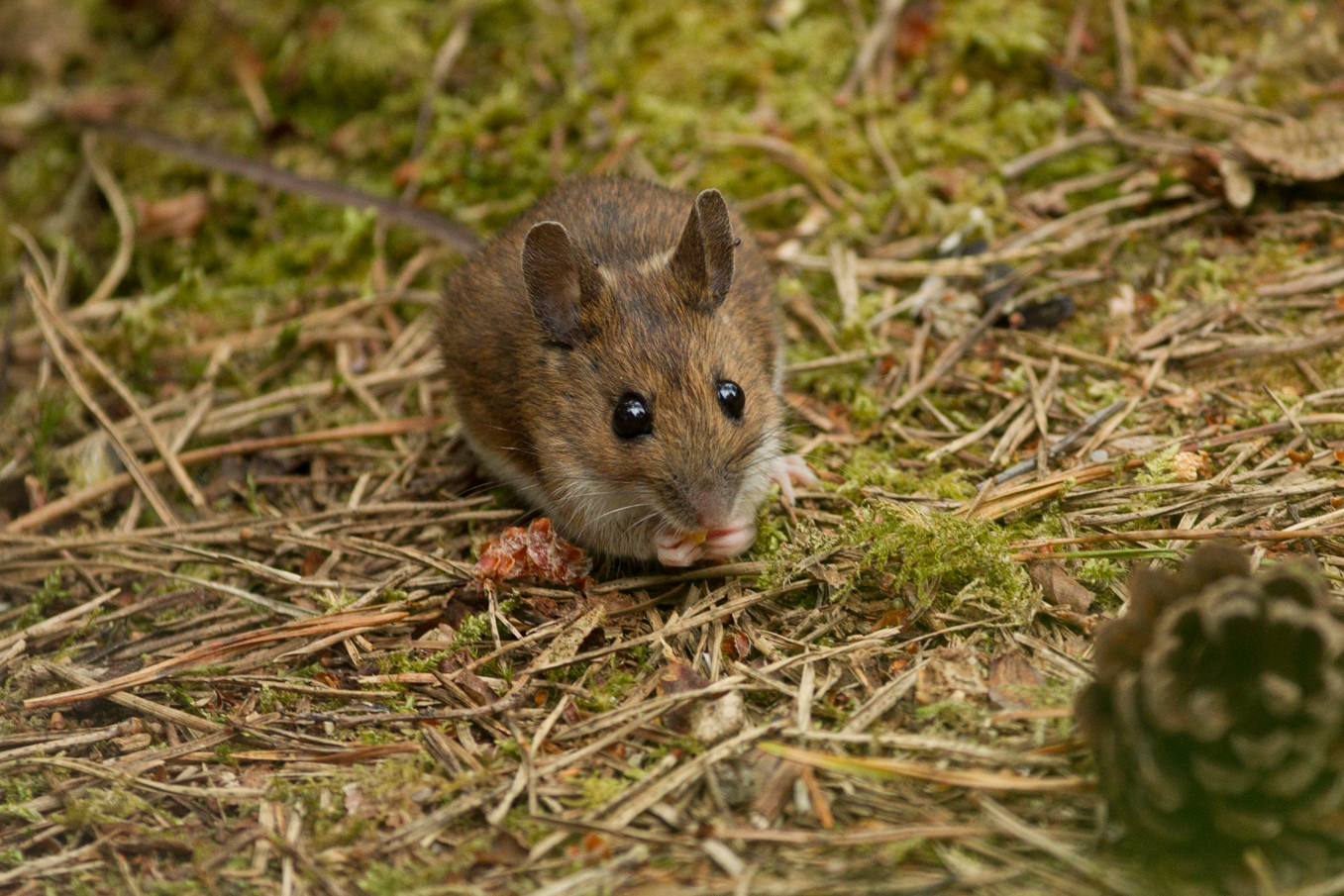 Sometimes also called the (long-tailed) field mouse, this is the commonest and most widespread UK mouse species. They are found in various habitats including woodland and scrub. They will often venture into gardens in search of easy pickings and will even come into buildings if food is available.
Like the other species of mice, wood mice have large ears, eyes and long tails. They also have large back feet that they use to jump great heights and if disturbed will often bound away. Another notable feature is the dark dorsal stripe down the back which is lacking in voles and house mice. The wood mouse also has a slightly larger cousin the yellow necked mouse (Apodemus flavicollis). As the name suggests these have a yellow/ginger band of fur under the neck. Unless you see this band though it is difficult to separate the two species. 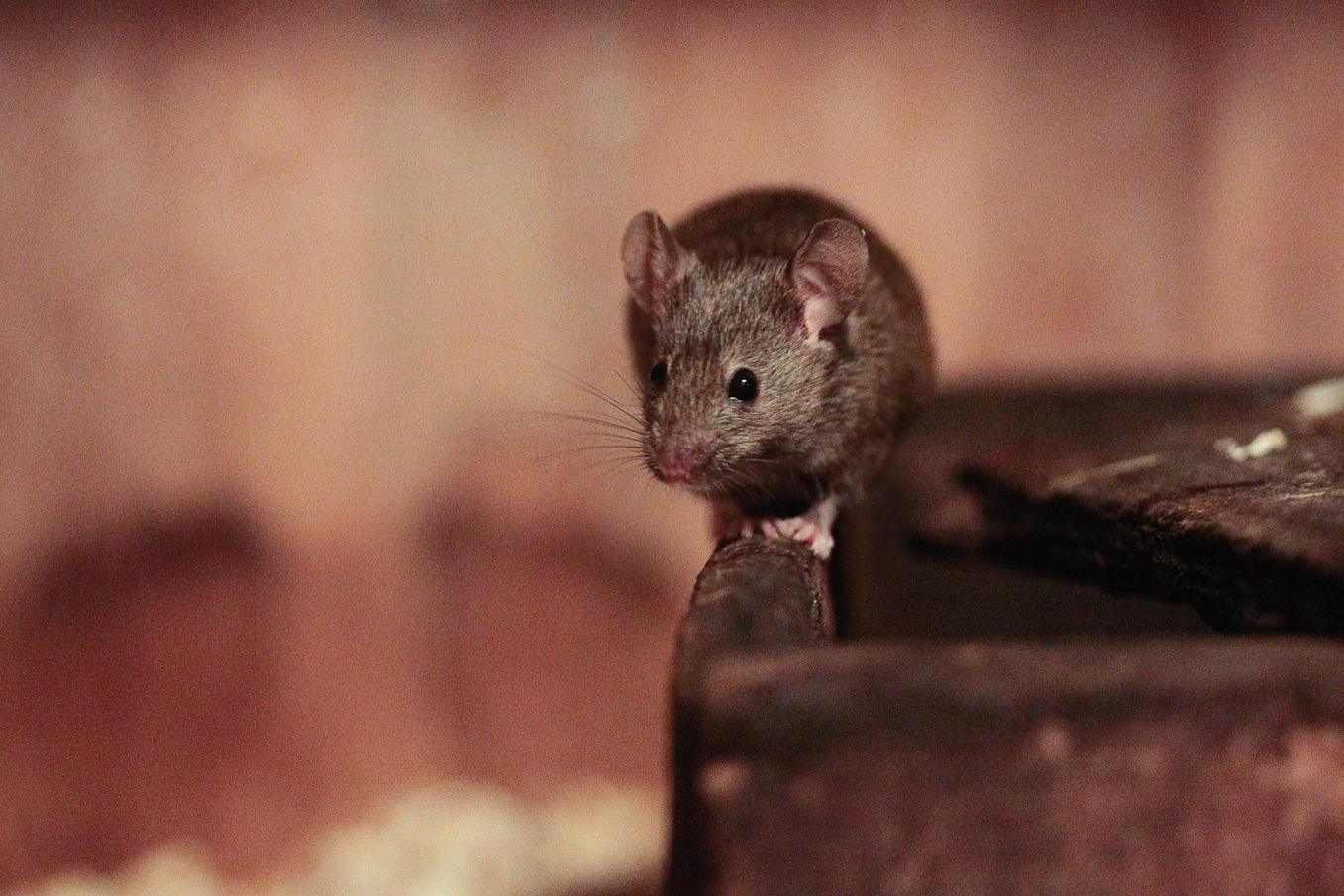 These world travellers first came to the UK on ships thousands of years ago and are now widespread though not common. The most reliable place to see these little characters is the London underground! Slightly smaller than the wood mouse the house mouse has smaller ears and less protruding eyes. The most distinguishing feature though is the consistent fur colour which is grey brown all over lacking the white underside of Apodemus species. 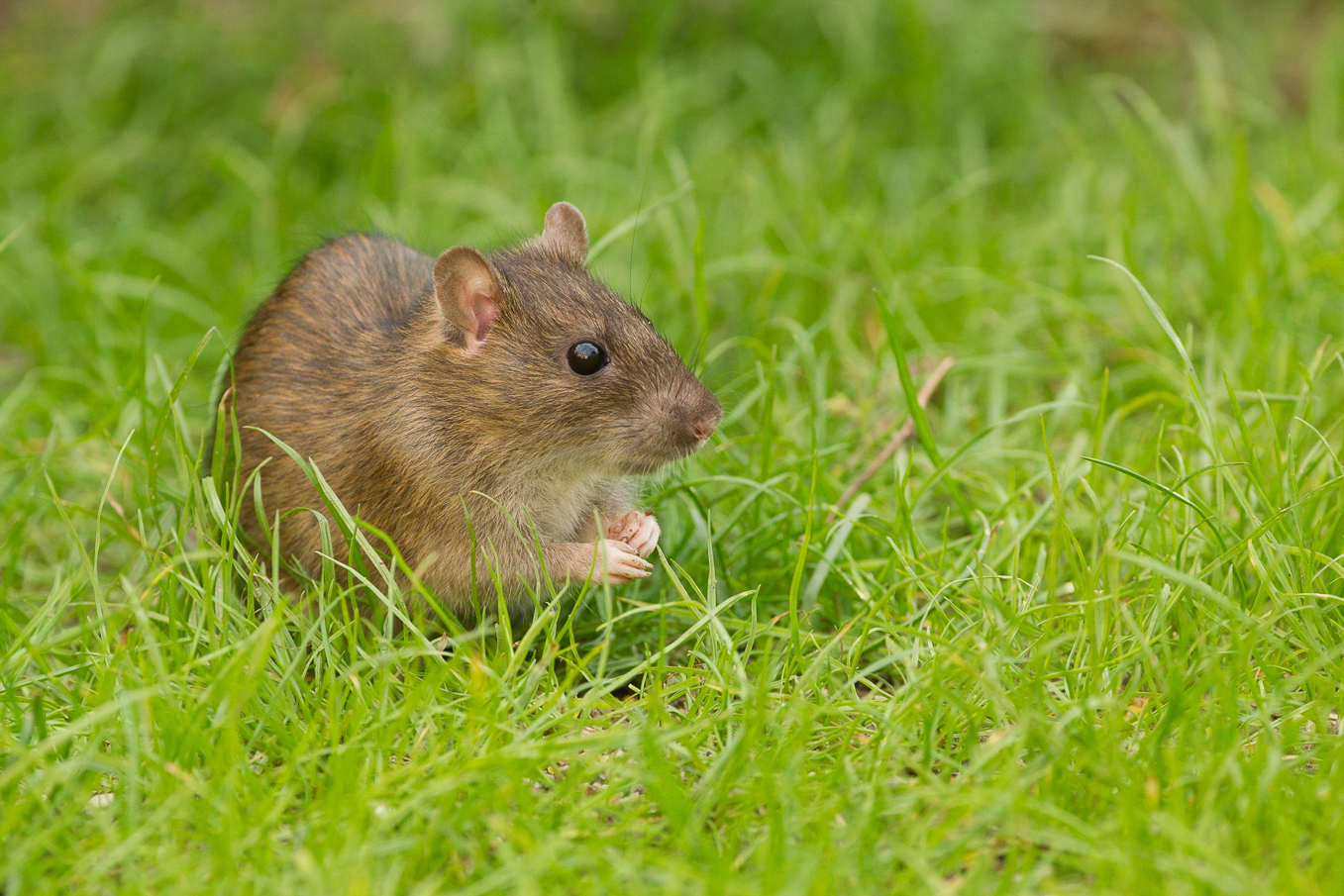 Brown rats followed black rats to the UK around 300 years ago. Black rats have since become virtually extinct but brown rats are still widespread and common. Living alongside people they are usually encountered in urban and semi urban habitats. Frequenting gardens, where they scavenge from compost heaps and bird feeders, they are rarely welcome. Several times larger than all UK mouse species adult rats are usually only confused with water voles. Young rats can resemble house or wood mice but once they are independent of their mother they are already considerably larger than both of these species. A mouse sized rat would almost certainly have mum nearby (she's in the background of this picture). 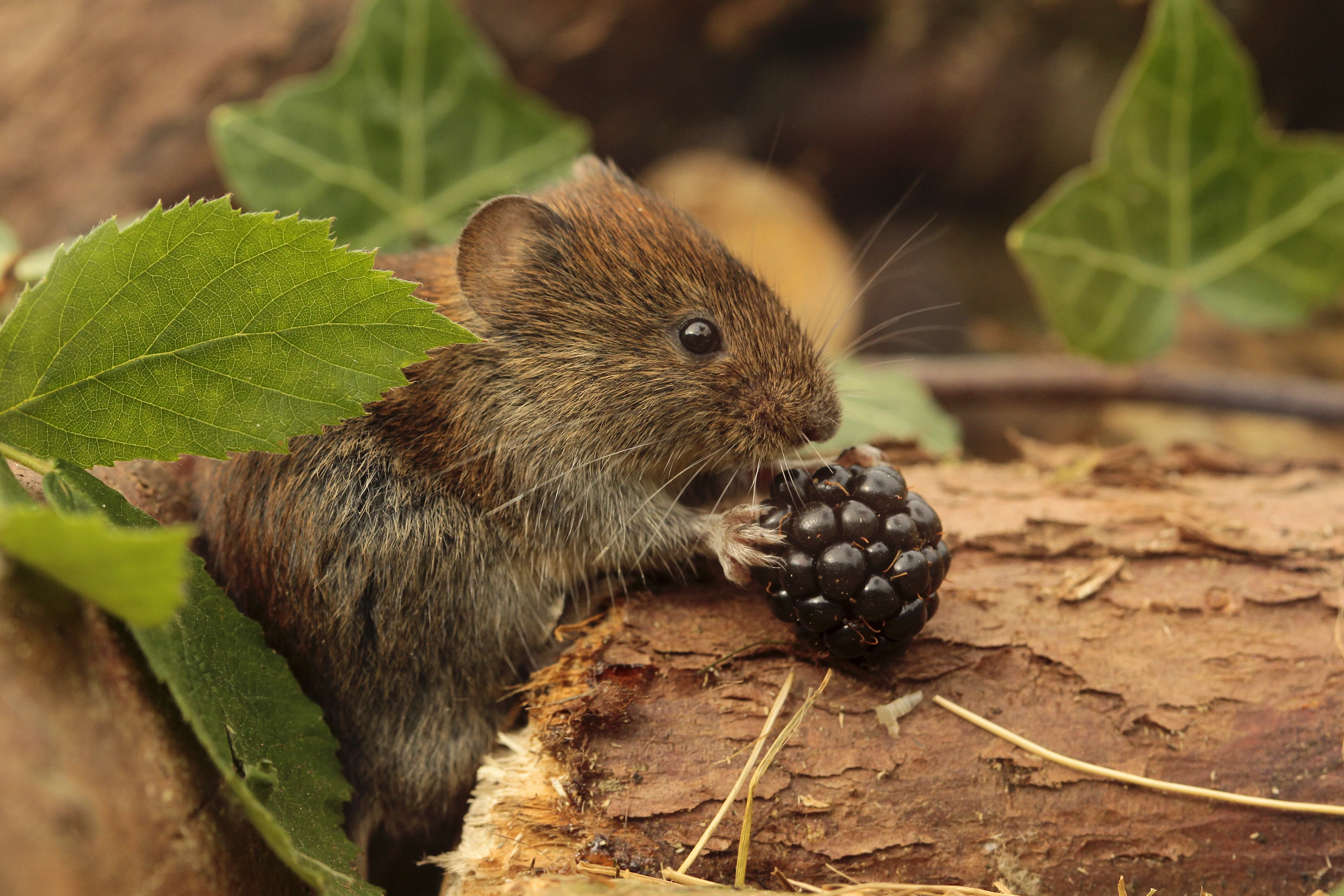 These gorgeous little creatures are common and widespread in the UK. They typically favour woodland, scrub and hedgerows but can be attracted to gardens where bird seed is a temptation.
They are similar in size to a wood mouse but with far less pronounced ears and eyes. Notably their tail is only around half the length of the body. They also have even length legs so scurry rather than bound and cannot match the jumping feats of mice. They have a reddy brown fur above and pale underneath but the difference is less marked than in wood mice. If conditions are suitable this can be one of our commonest small mammals and an important food for birds of prey, owls and foxes. They are usually only found in grassland habitats such as mature meadows. They use tunnels through long grasses to avoid predators and feed on grass roots and seeds. 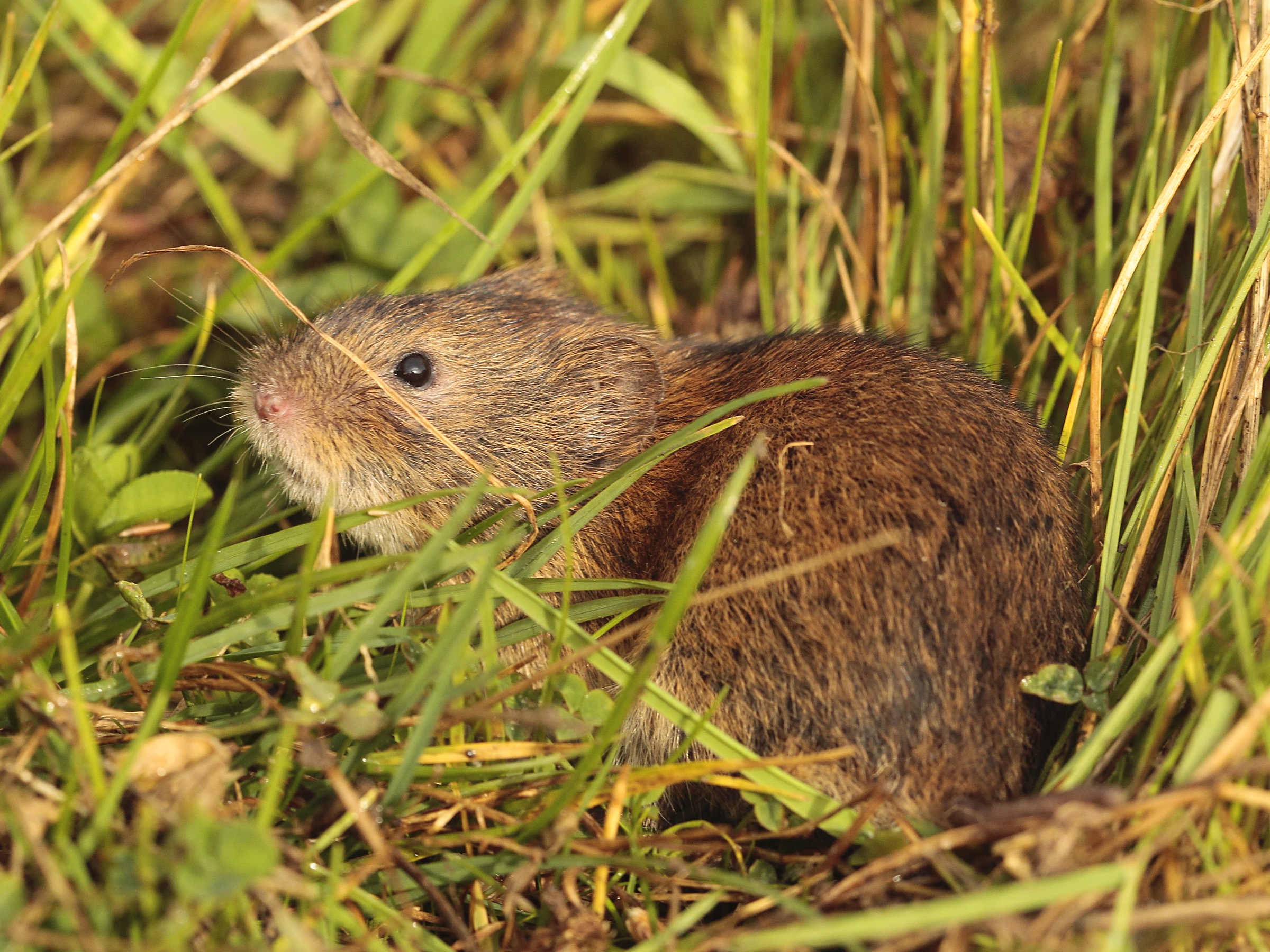 Generally they are larger than bank voles however the size is variable especially as young ones are abundant during the summer months. The fur is usually less reddish than the bank vole and generally grey/brown. The ears barely extend beyond the fur and the tail is barely a third of the length of the body. 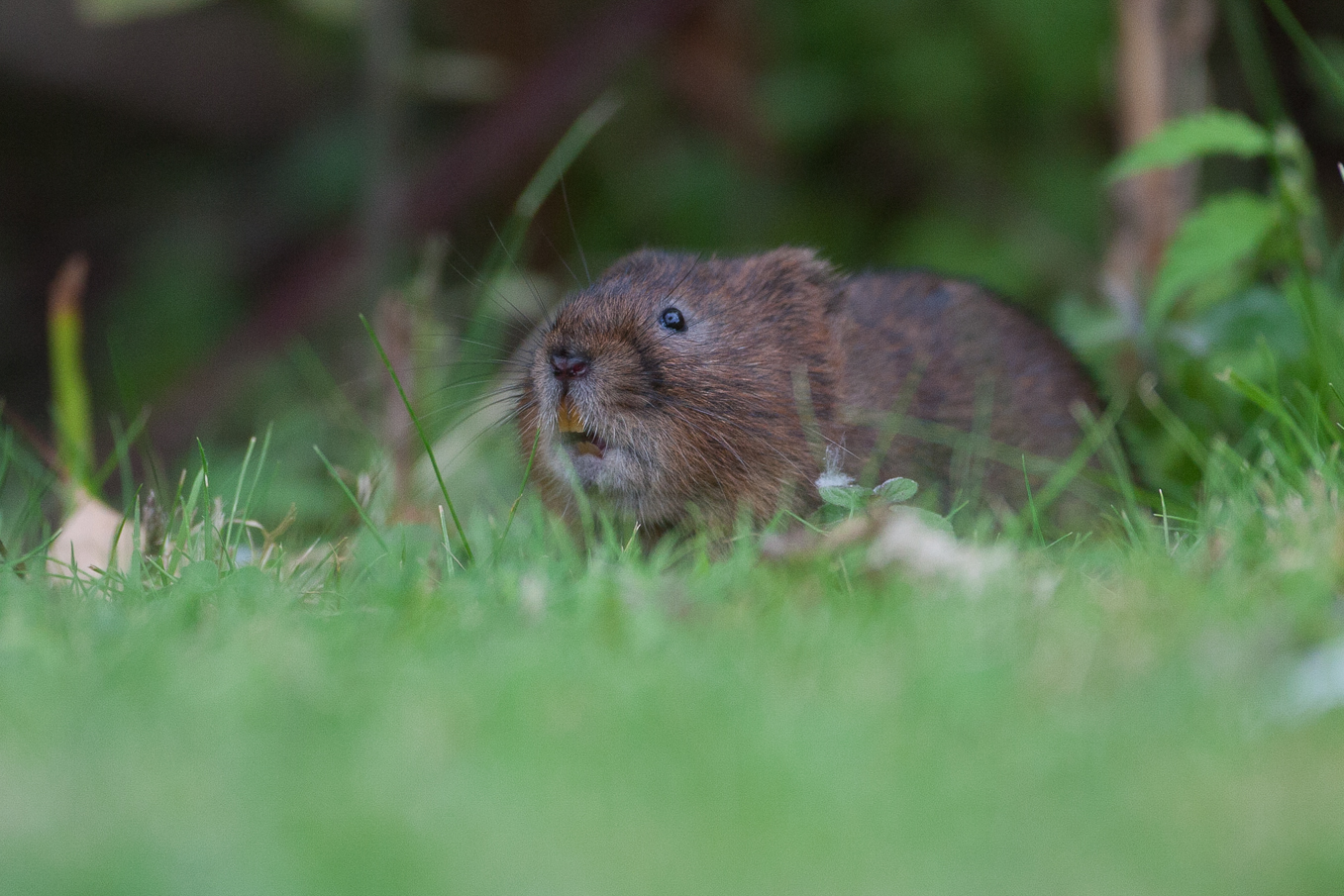 A widespread mammal the water vole has become increasingly rare in the last few decades. Loss and degradation of wetland habitat and the expansion of the non native American mink has seen many colonies wiped out. Remaining water voles can be found in lakes, rivers and canals where marginal vegetation allows them to thrive.
Water voles are much larger than other UK voles but still have the small ears and rounded faces of their small cousins.They also have the distinctive cute appearance if you get a good view and a tail that is usually around half the length of the body. Rats do swim and even dive but a good view would show the large ears and body length tail. You would be very lucky to see a harvest mouse out during the day and in the open. They are our smallest rodent and can climb through the thinnest of grasses and scrub. Their habit of climbing is helped by a a prehensile tail which they can wrap around stems or hold out stiff for balance. They weave a tennis ball sized nest in grasses, crops or reed beds and these can sometimes be seen in early winter when vegetation has died back. 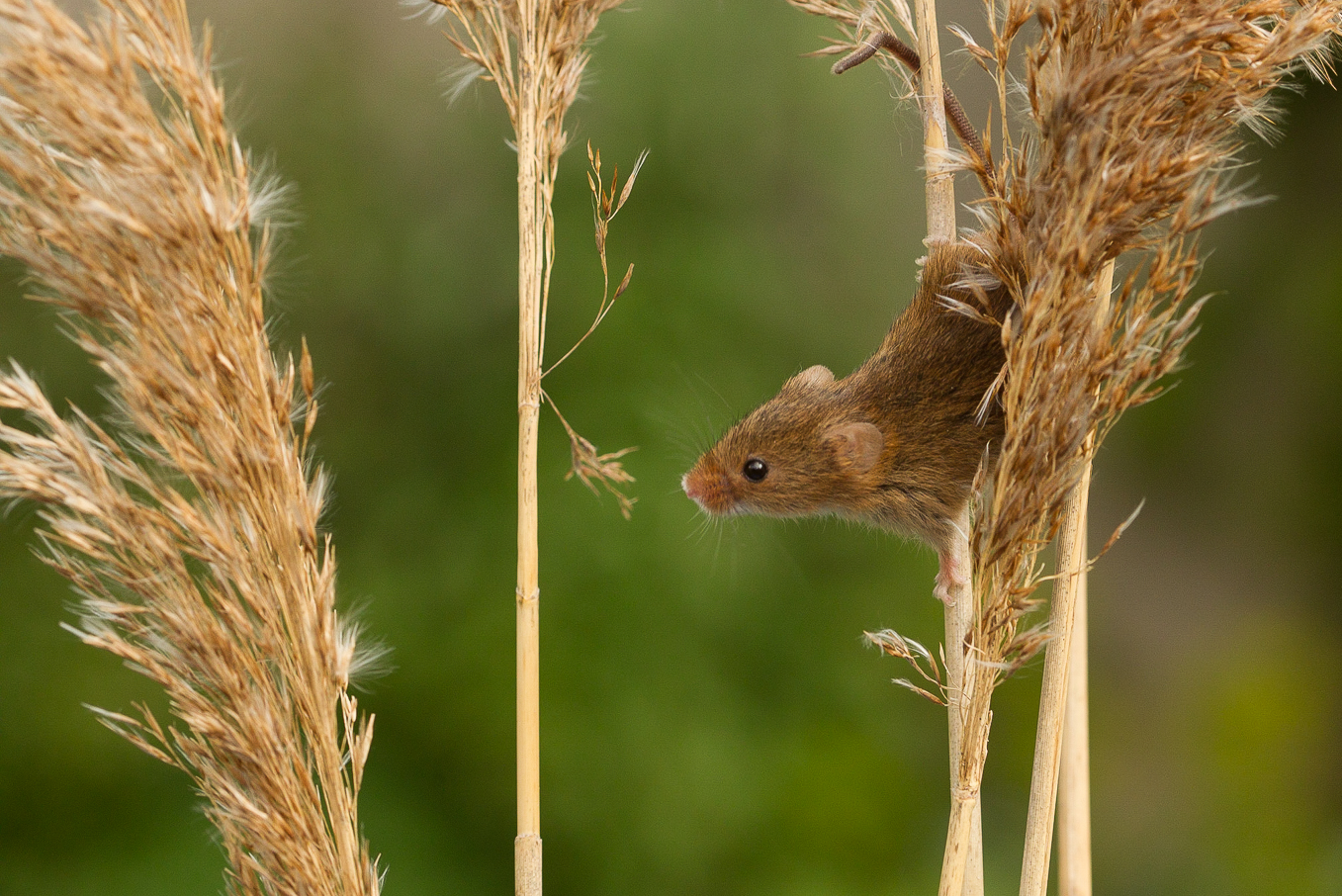 Ears and eyes are small for mice and more vole like but the tail is as long as the body. Fur is rich browny gold with a white underside. They are very shy and unlikely to be found on the ground or in the open. Almost entirely nocturnal, you would be even more lucky to see a dormouse though they are more widespread than is often imagined. Dormice, like harvest mice are expert climbers though typically preferring woodland and scrub.
They are beautiful animals with golden fur and large eyes typical of nocturnal species. A good view would allow the observer to pick out the thick furry tail which separates these from other UK rodents (apart from the large grey edible dormouse (Glis glis). Dormice require a variety of food through the year. Blackberries are a great source of energy before winter hibernation.