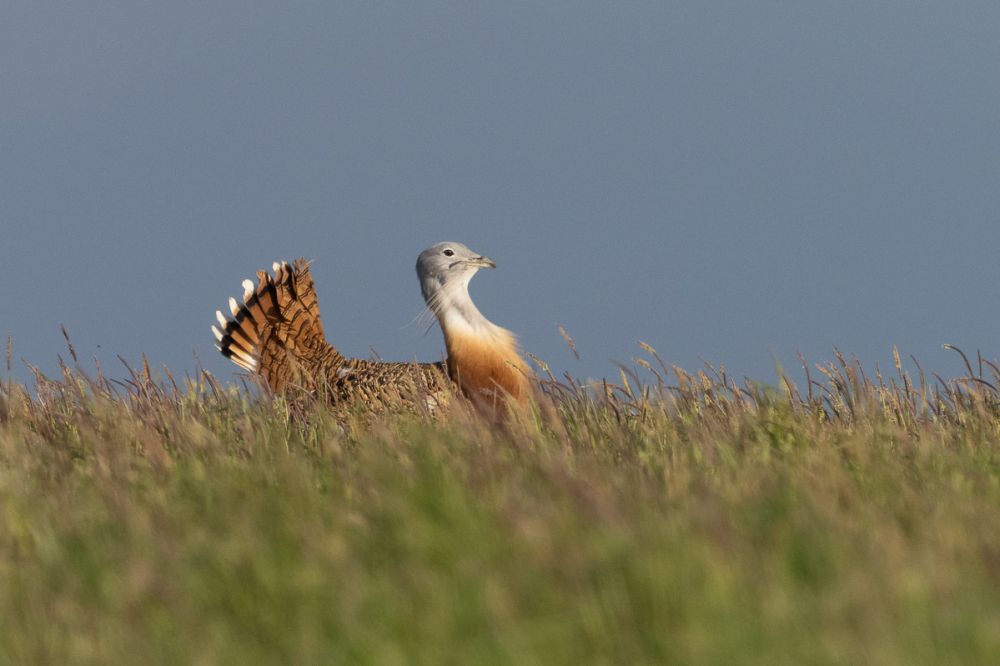 A unique chance to get up close to a returning icon.

At 5.20am it was a dark and cold April morning and myself and fellow wildlife enthusiast Oliver were donning dehumanisation suits. It was approaching dawn and the fields around the Wiltshire farm were brimming with singing skylark and corn bunting. Despite the gloom Steve, our guide, pointed to a couple of distant white shapes whispering, “look there are males displaying already”. The white blobs a few hundred meters away were of course our wildlife target for the day, great bustards. 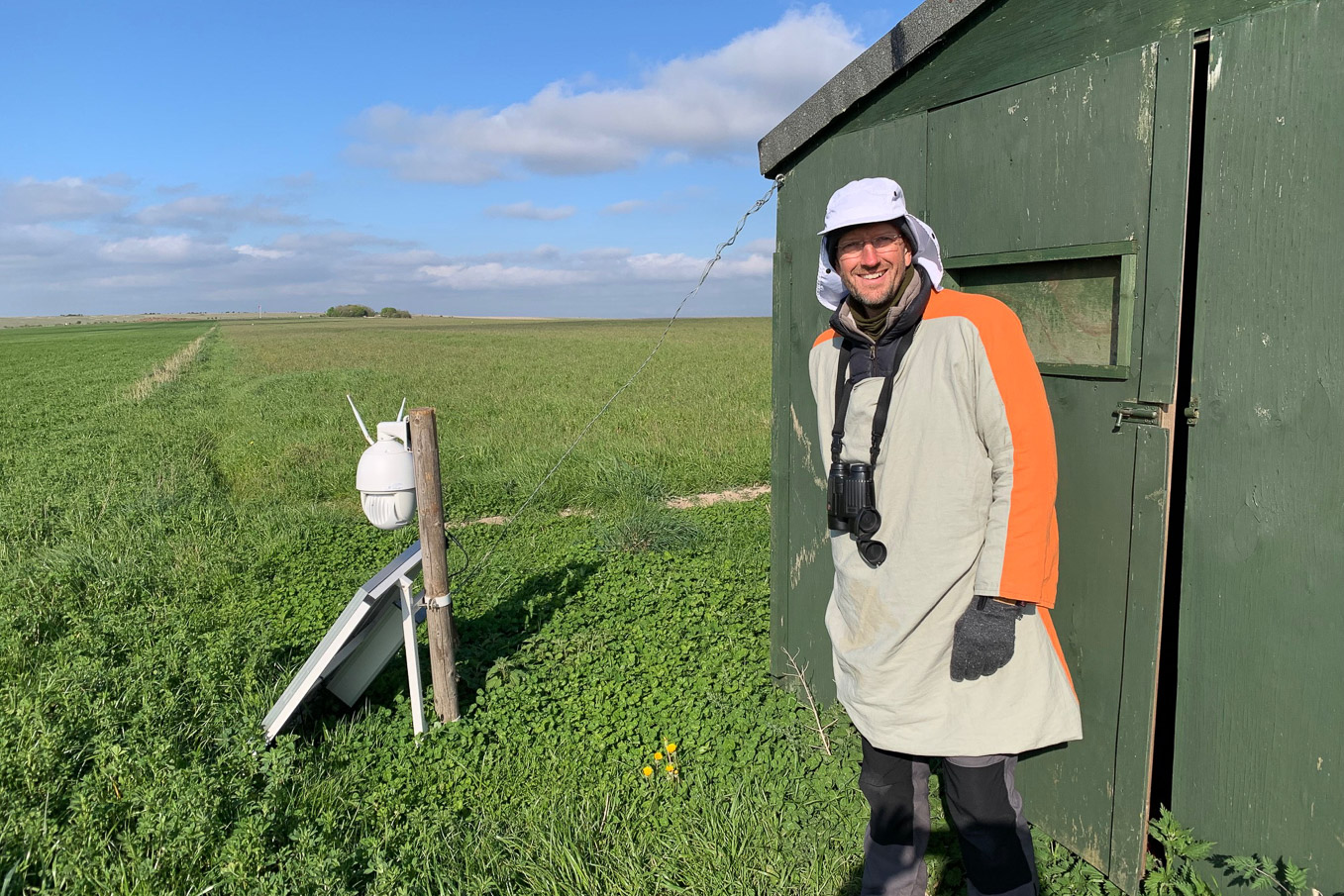 Dehumanisation suits are used to reduce the chances of the birds being disturbed by our approach to the hide. 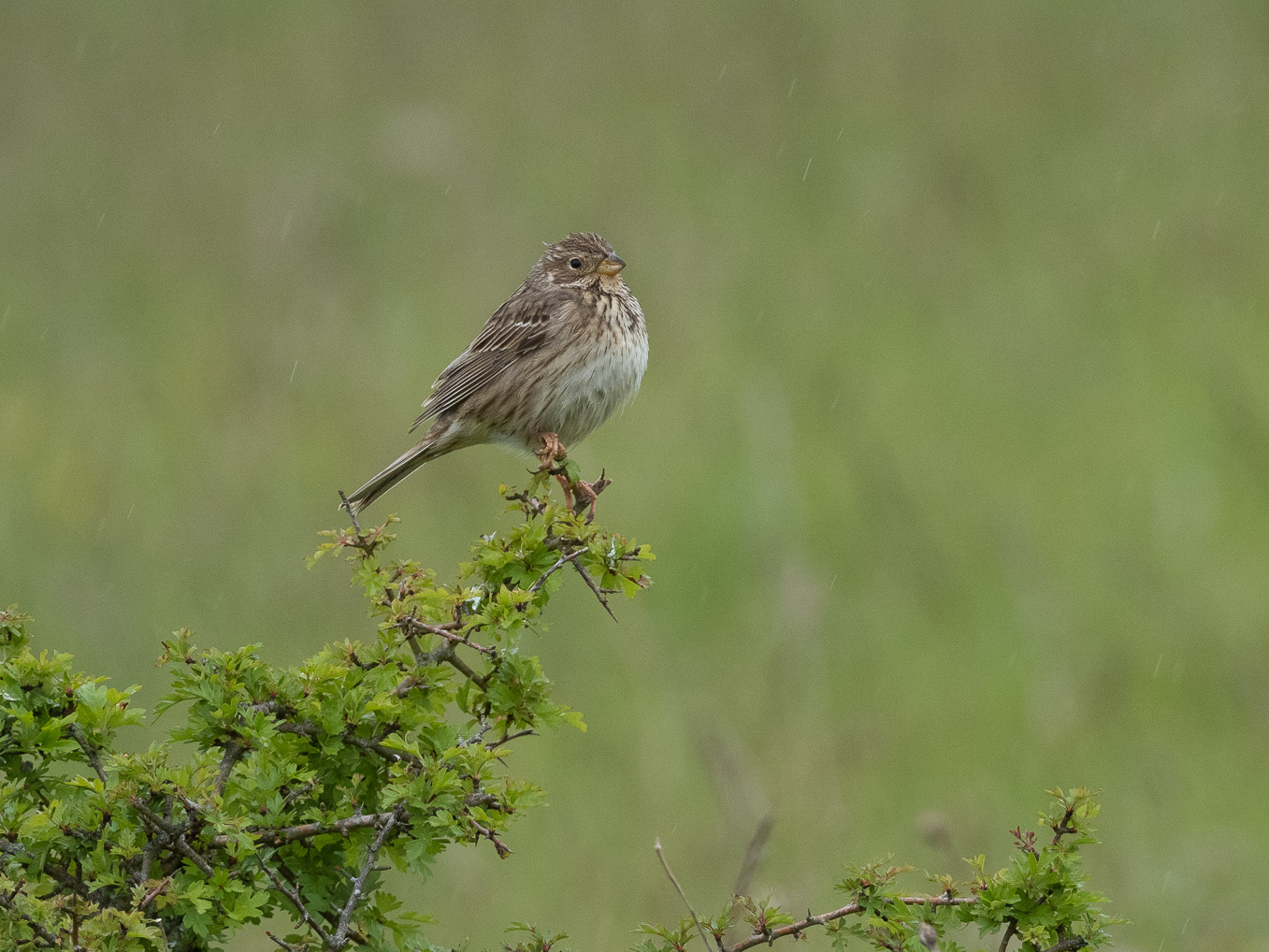 Corn buntings are numerous across the plain.

The hide was a short walk into open fields and we were soon positioned looking out of the flaps at the distant bustards. I had read from someone else’s account that the bustards can appear to the rear of the hide too so we checked there regularly and sure enough our first close encounter was a bird feeding around 40m behind us. Unfortunately the light was far too dim for photography and as he walked away we were left hoping that this would not be our only view at close quarters.

Fortunately half an hour later he walked by again and this time there was enough light to get images worth keeping. He soon strode off to the distance though and joined the other distant males displaying. 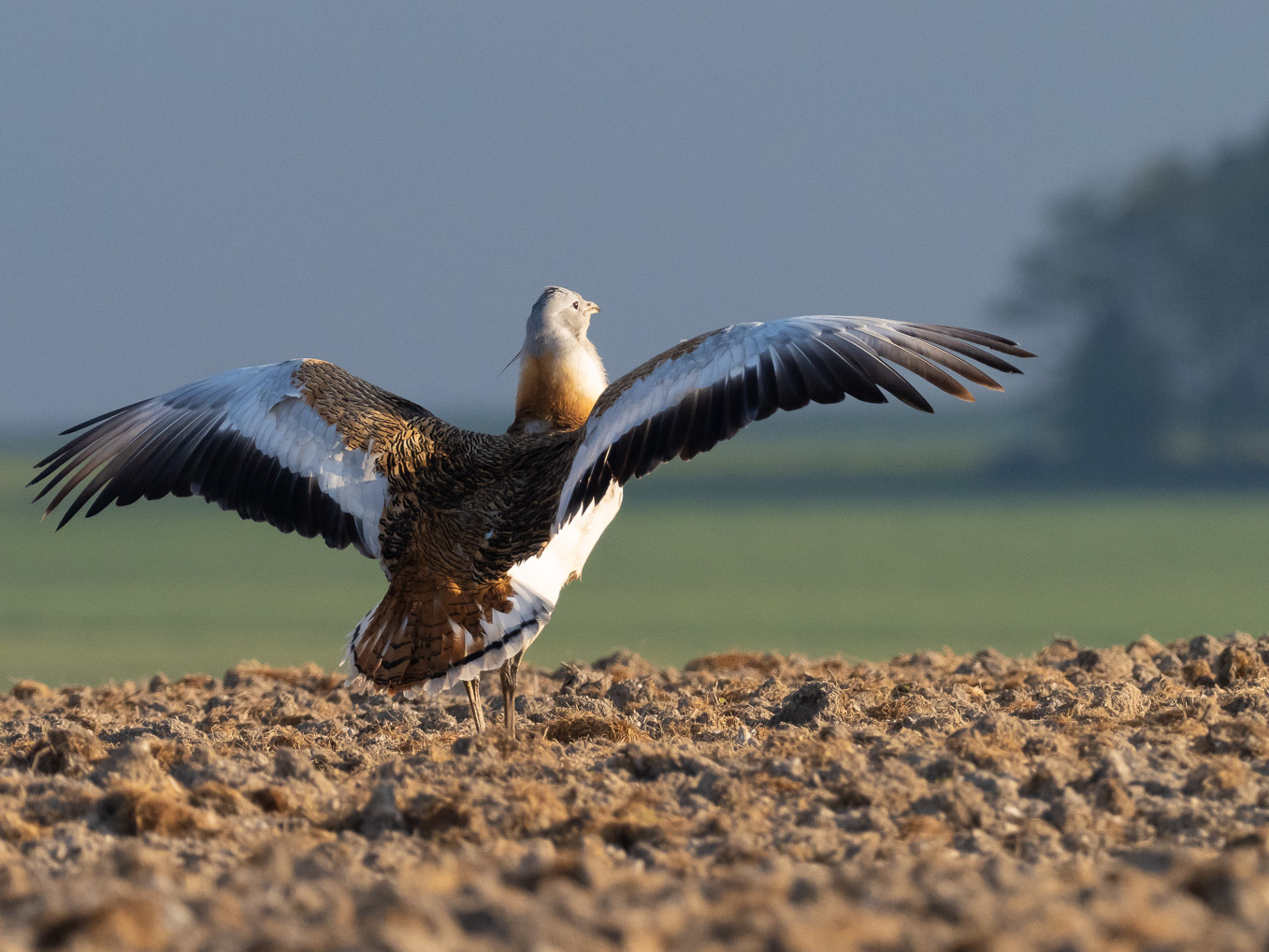 With some individuals recorded at over 20kg the male great bustard is one of the the worlds largest flying birds.

Males will come together each spring displaying their elaborate plumage to impress the watching females. The males look to impress with their size and exquisite arrangement of tail, wing and neck feathers but will also bump and barge each other to determine dominance. 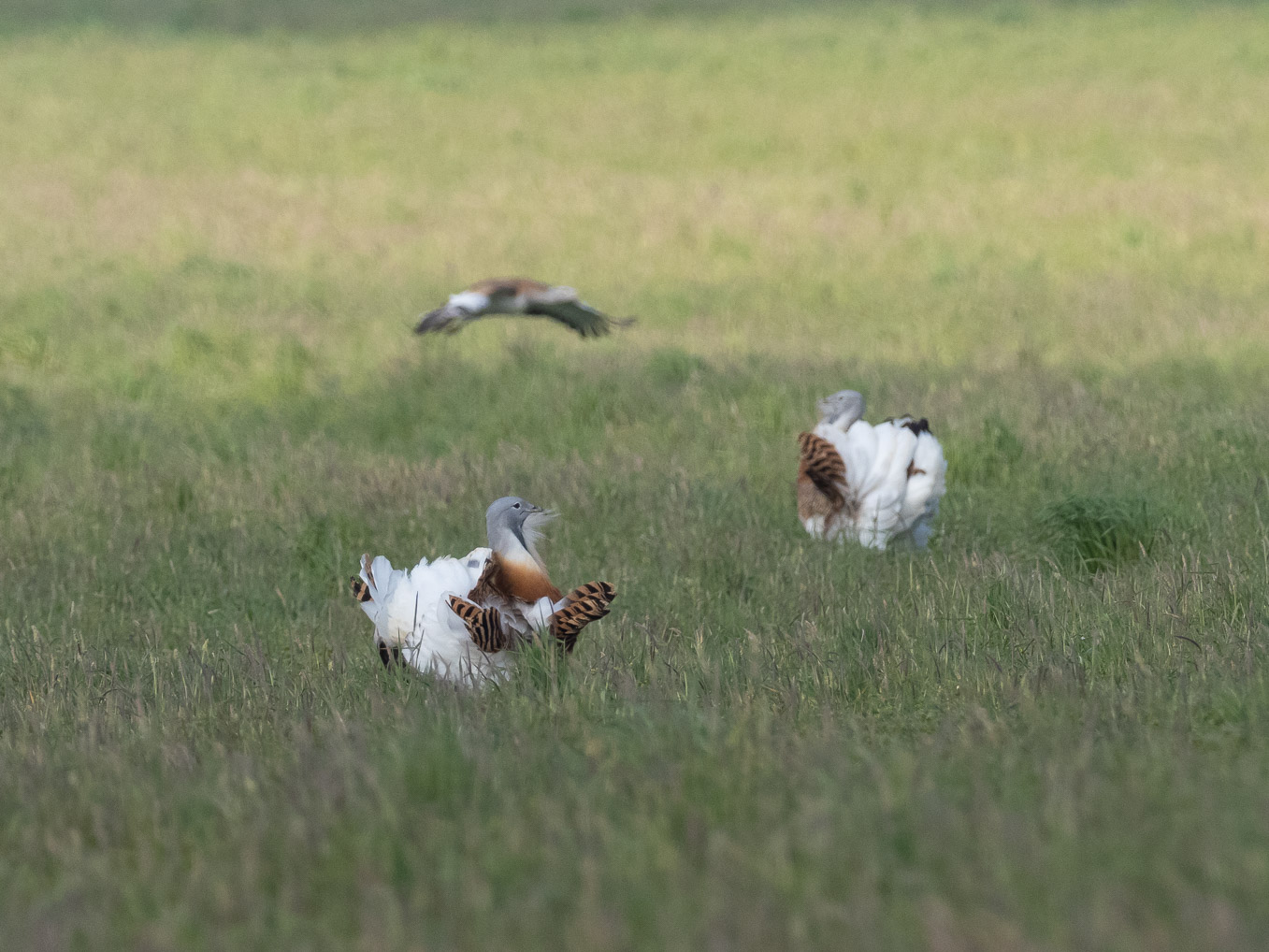 The arrival of a female prompts the males to display. 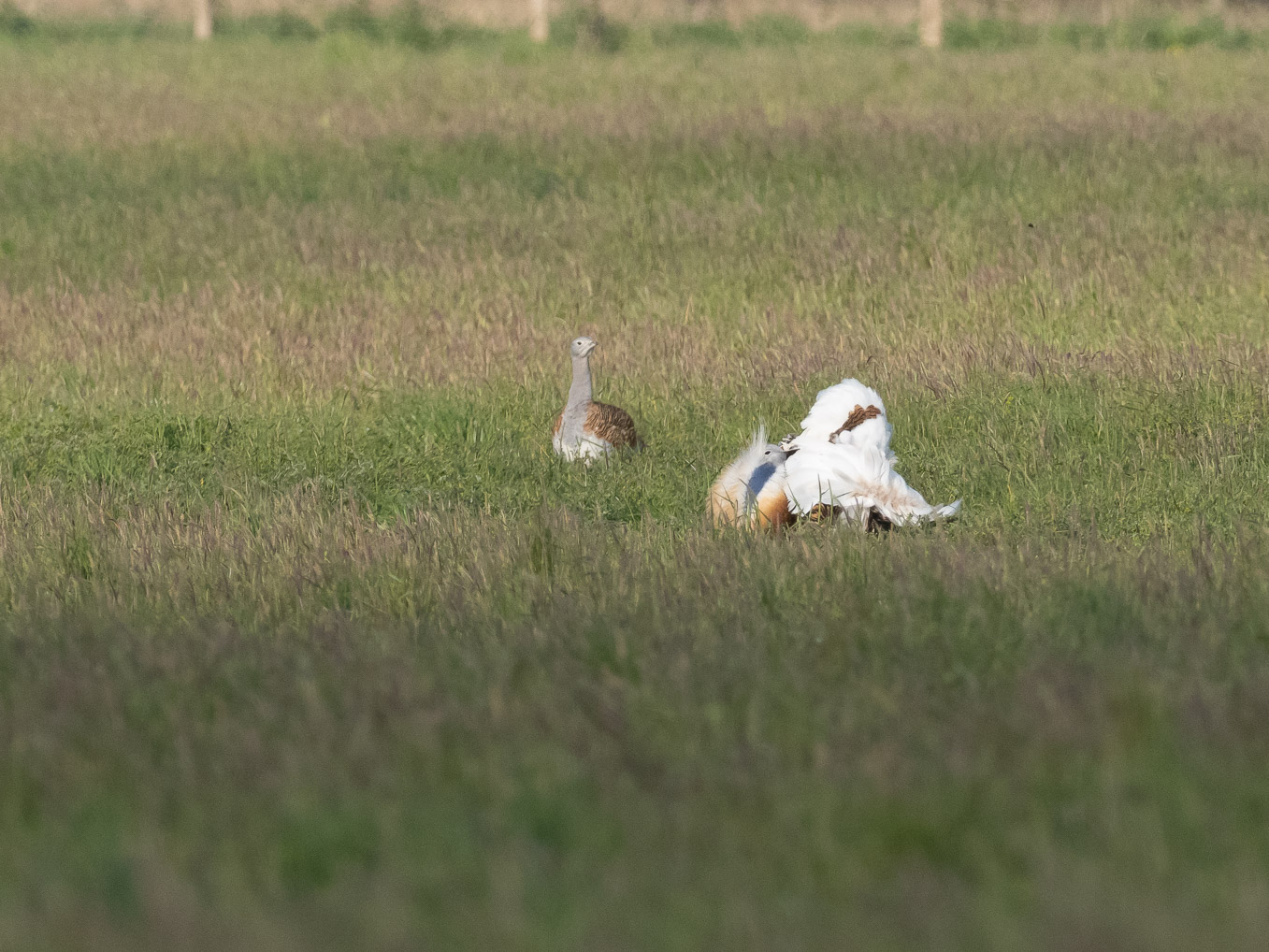 Once mated the females will seek a quiet field to nest where they lay 1-3 large eggs. It's at this time that they are most susceptible to disturbance and the peril of harvesting equipment. Many bustard females are taken by foxes or killed by combine harvesters as they sit on their eggs.

By 8am the sun was fully up and the stunning oranges of the distant bustards could be seen glowing in the light. If only they would come closer, a lot closer! Then it happened. One male turned and took a few paces in our direction. "That one has just come this way a bit" I said with faint hope. Then he walked again and kept coming…and coming! 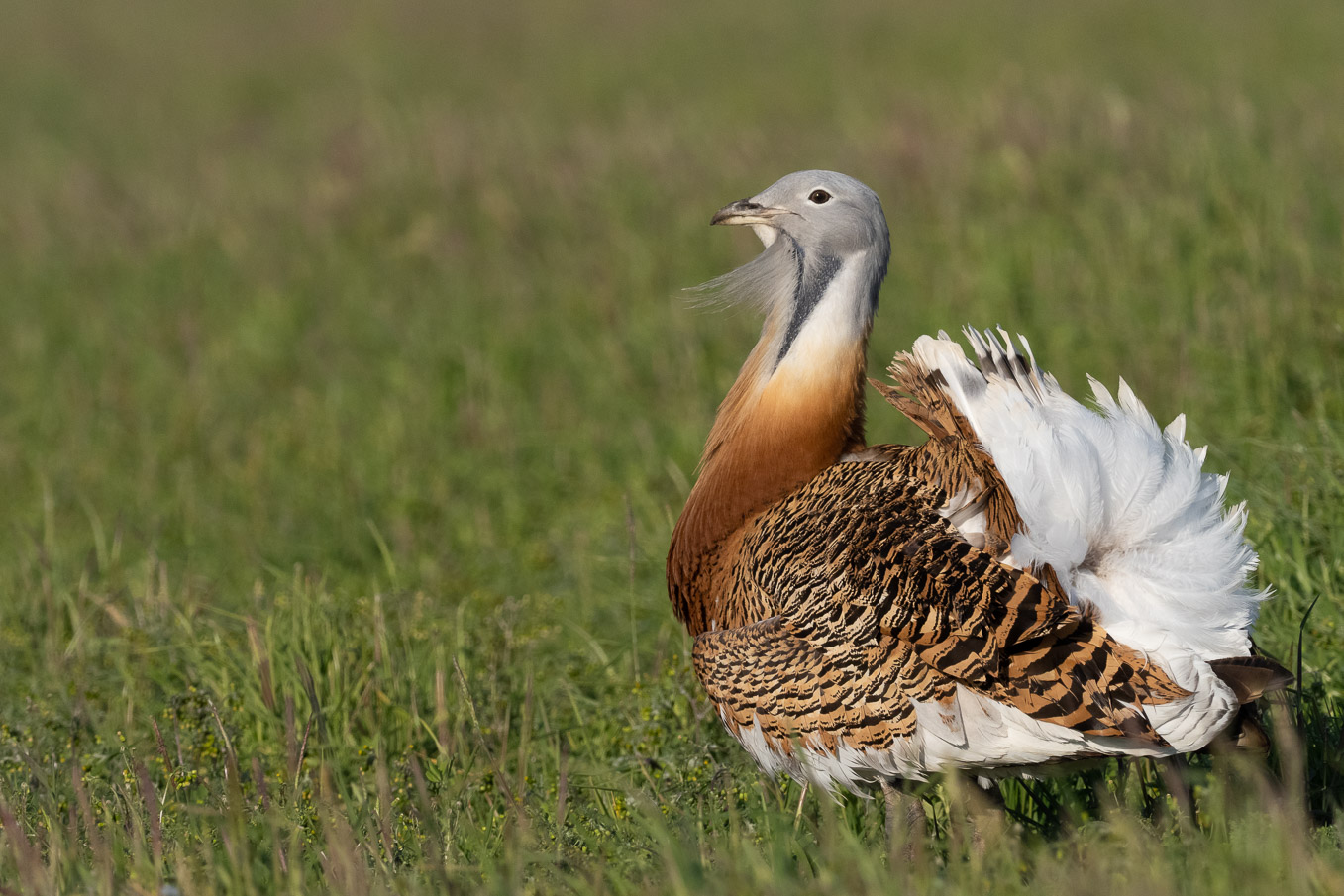 Having stopped only 30 meters or so from the hide and the two grateful photographers within, he then posed for several minutes allowing us to frame images with different lens combinations and compositions. Even better he then lowered his head and began to display.

The display is a complicated combination of the wings being held out and angled and the head pulled back into a ruff of fathers that become erect from an inflated neck pouch. In addition the tail feathers cock and fan like that of a black grouse and when complete it is quite difficult to discern where the bird begins and ends! 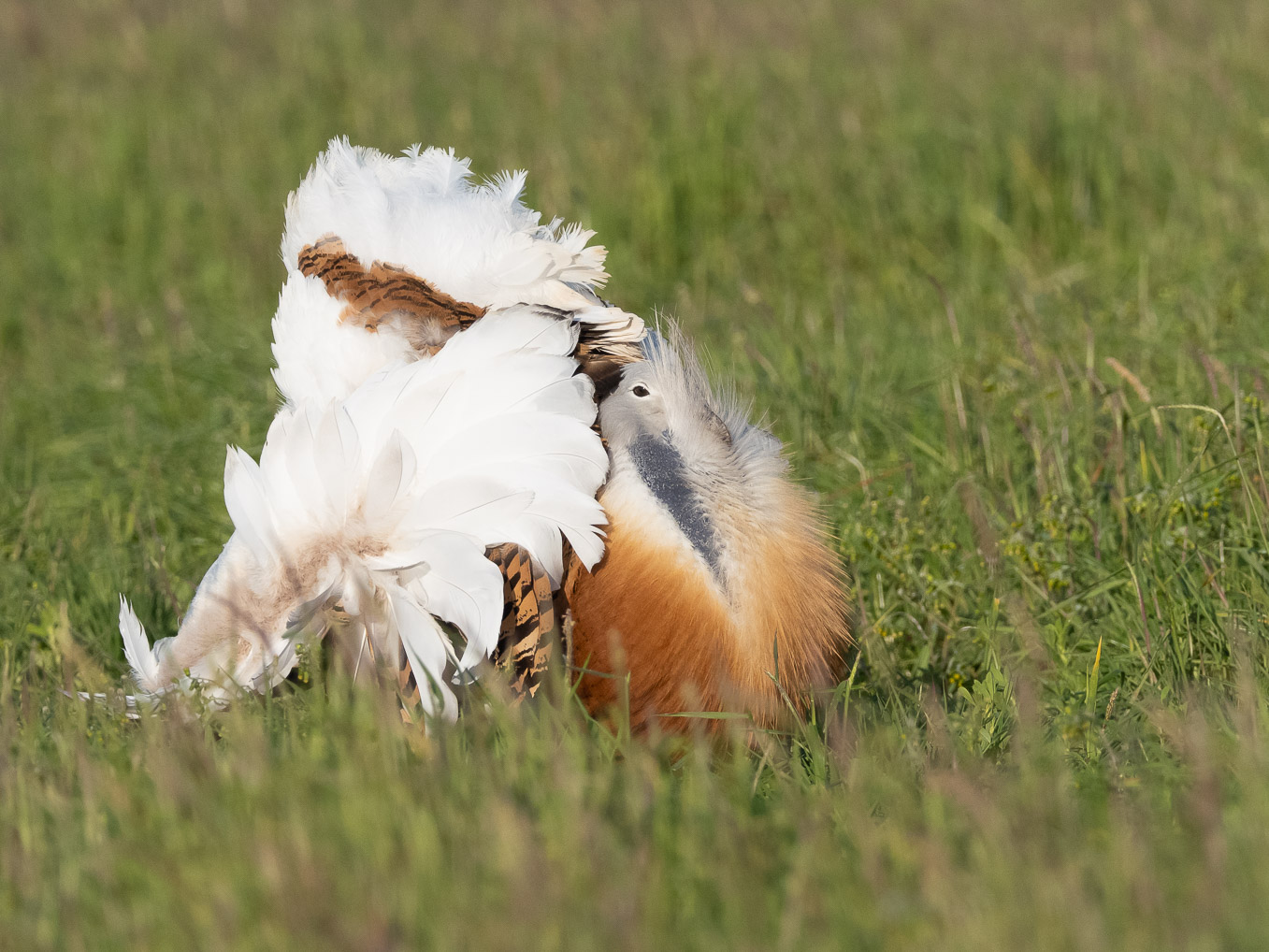 After a full half hour of posing and displaying the fine individual decided that he had impressed us enough and walked back to join the other distant males who by now had attracted the attention of a female. With no likelihood of any further action nearby and memory cards full of images we were happy to go and find some breakfast so it was time for extraction!

We had been left with the phone number for Dave who we were told would come and get us from the hide. Once he was nearby he was able to confirm that there were no birds near that might be flushed so with bustard suits on again we left the site and met him at the nearby farm. 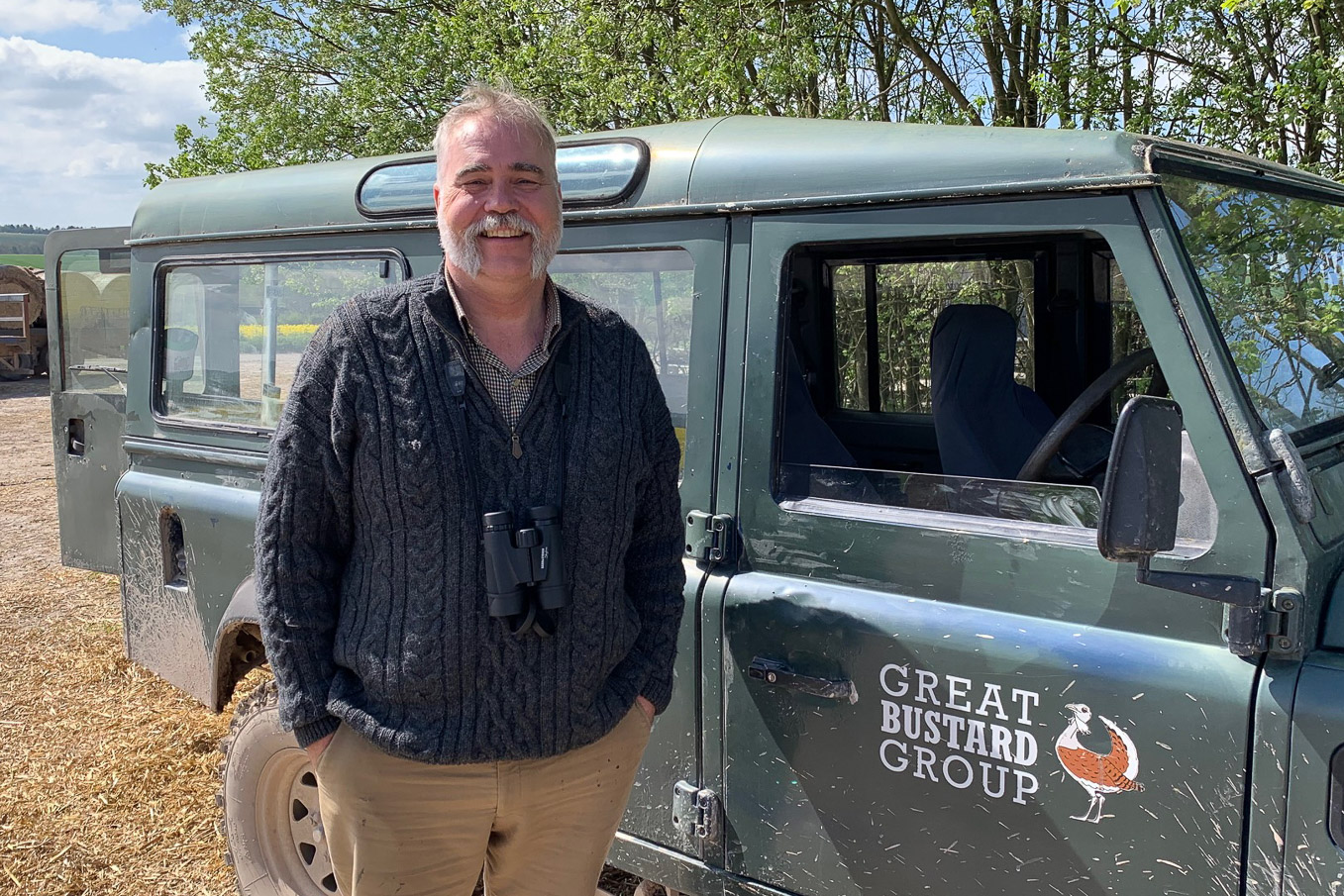 A man on a mission; David Waters MBE founded the Great Bustard Project in 1998

David Waters MBE was the founder of the project and the next hour was spent with him touring the area learning more about the project, the area and of course the birds themselves. We saw the lucerne crop that they feed on in the summer and the oil seed rape that sustains them in the winter months.

He was generous with his time and over a cup of tea at his office, Dave was able to explain the history of great bustards which were hunted to extinction in the UK in the early 1800s. They remained absent from their former haunts until in 1998 Dave founded the project with the aim of returning this enigmatic species to the plains of Southern England. It was fitting that the project has been based in Wiltshire where the bustard features on the county's coat of arms. 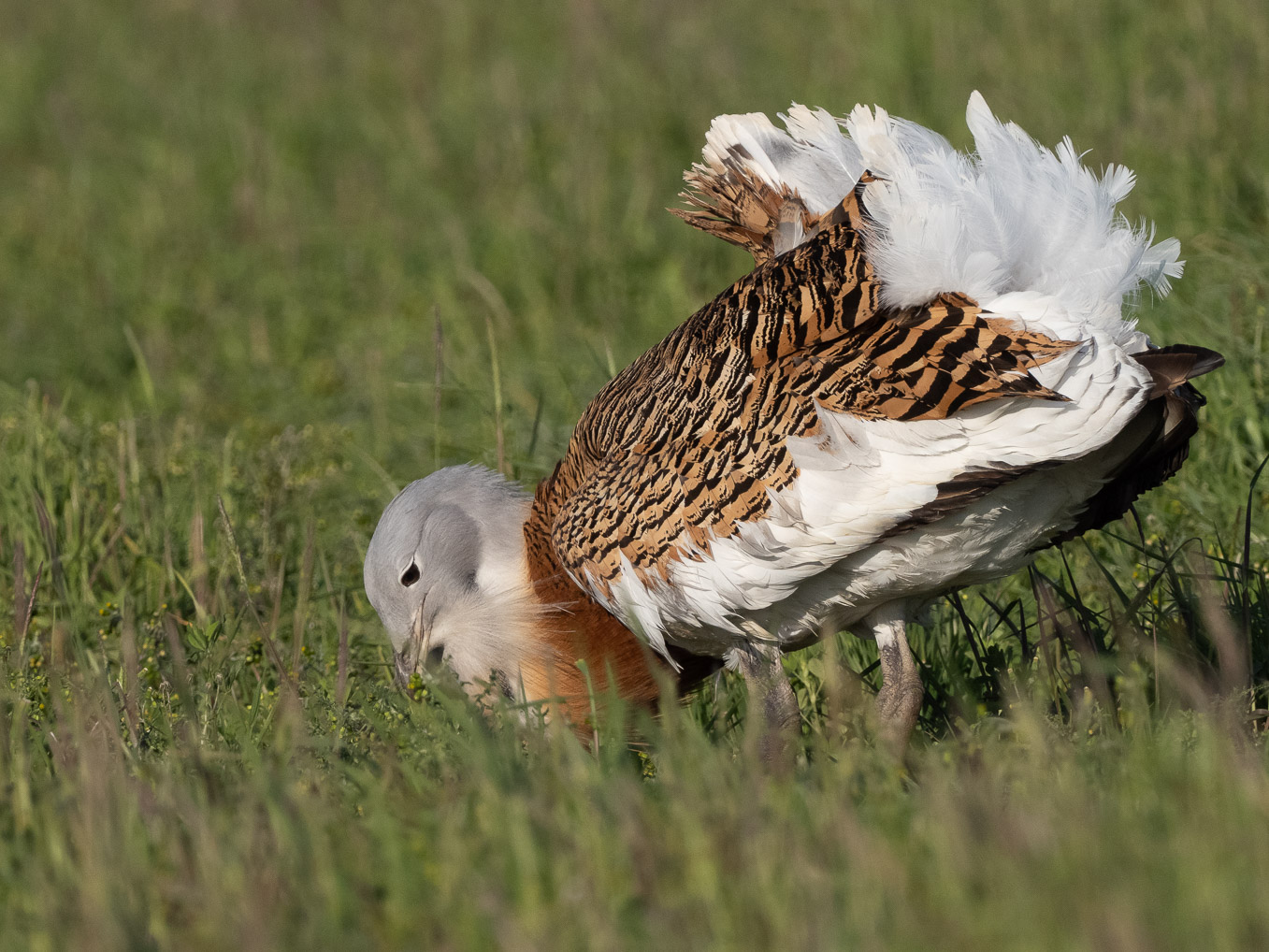 Bustards feed on lucerne (also known as alfalfa) and oil seed rape crops as well as insects and even small animals such as mice and lizards.

To kick start the new population, eggs and chicks were sourced from Russia and Spain before being raised in captivity in enclosures on Salisbury Plain. The birds are carefully fed by puppets and then carers in 'dehumanisation suits' which ensures that they don't become imprinted or habituated to people. Once fledged they are then released onto the surrounding arable land where they live freely in loosely formed groups of males or females. The project hopes that those birds which make it through to breeding age will mate and nest locally ensuring that their own offspring have a natural wild upbringing. In 2009 the Great Bustard Project reached this major milestone when the first wild born chicks fledged. 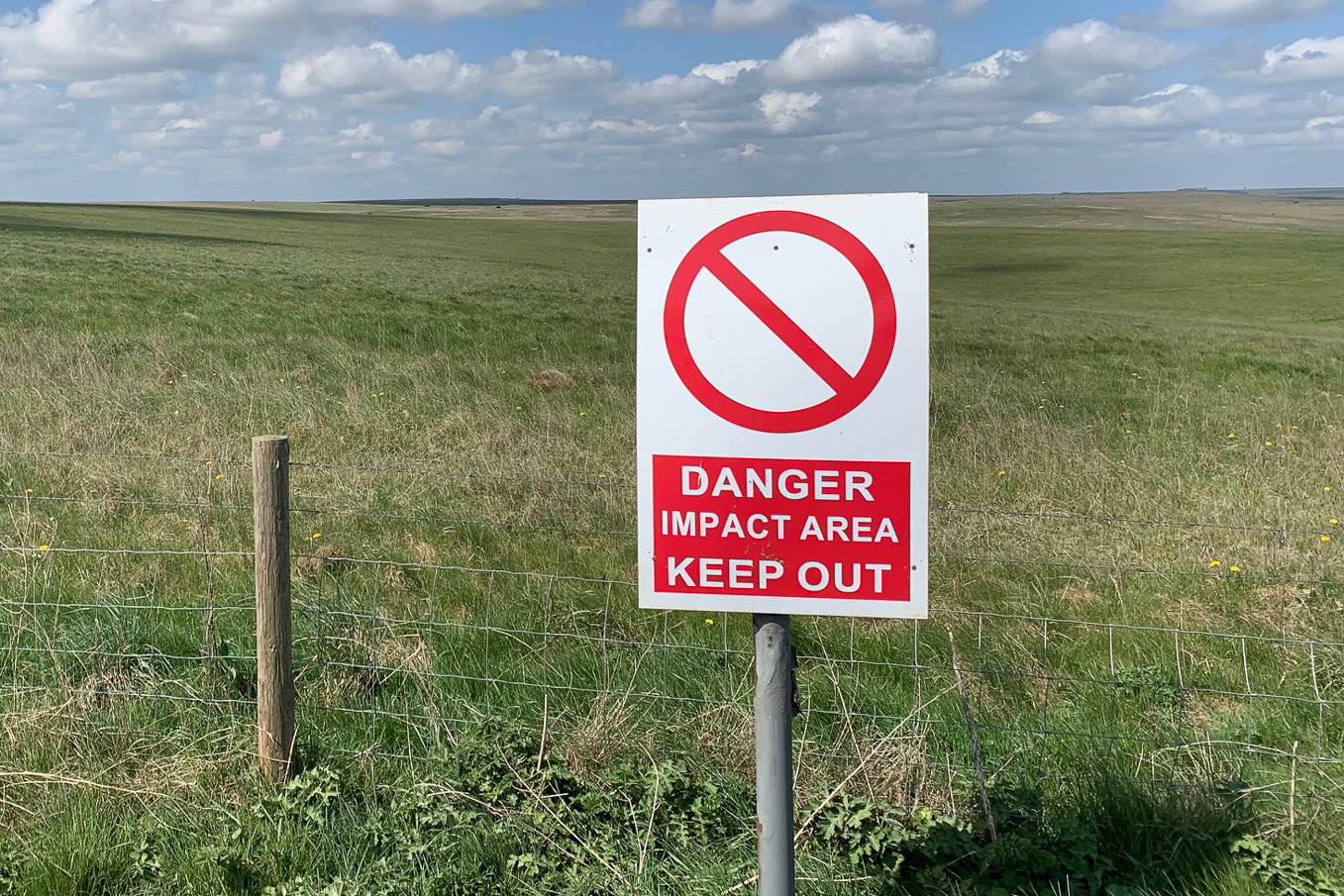 Much of Salisbury Plain is controlled by the MOD with minimal access to the public. This allows for less disturbance to wildlife.

In the last decade the project has gone from strength to strength with bustards annually breeding in the wild and now reaching a self sustaining population of over 100 wild living birds. The birds will sometimes wander further afield and have occurred in other counties including Somerset and Oxfordshire. In the longer term it is hoped that further introductions can be achieved in other suitable areas in the UK.

The Great Bustard Project relies hugely on the the time of volunteers and the financial generosity of supporters and having spent a morning with David and seeing the birds displaying we were left in no doubt of the worthiness of this brilliant endeavour. If you want to find out more and support the scheme please check out their website and maybe consider a visit yourself. 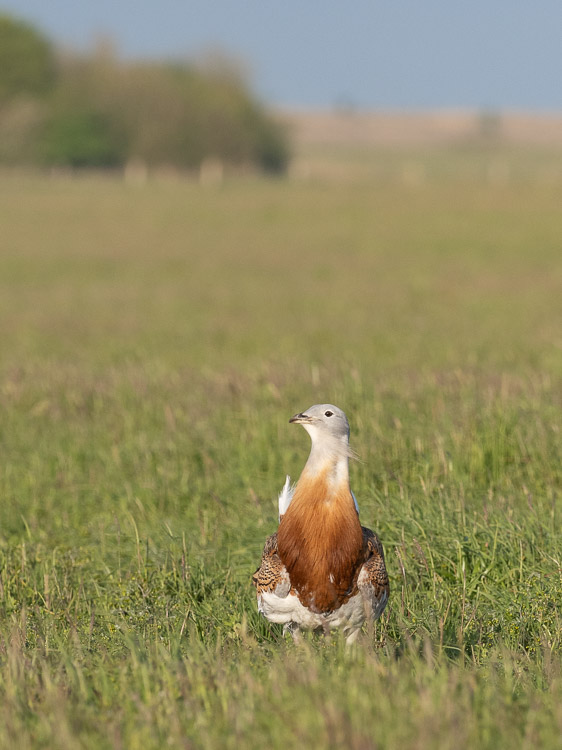 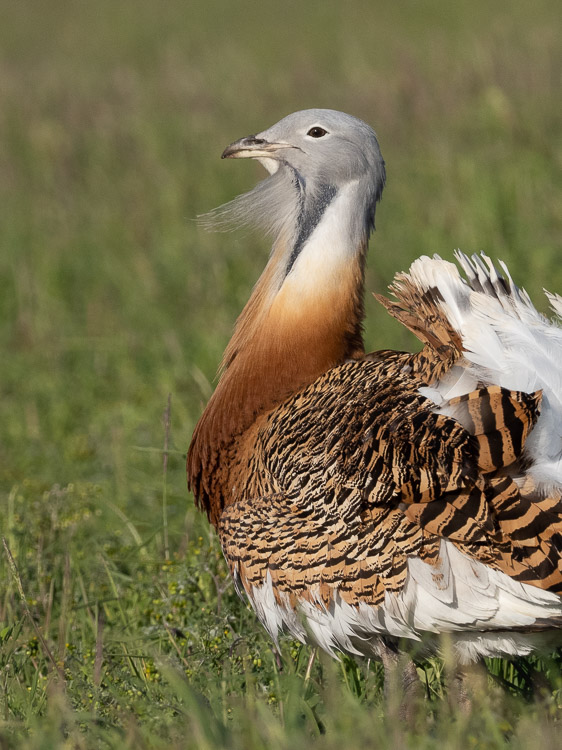