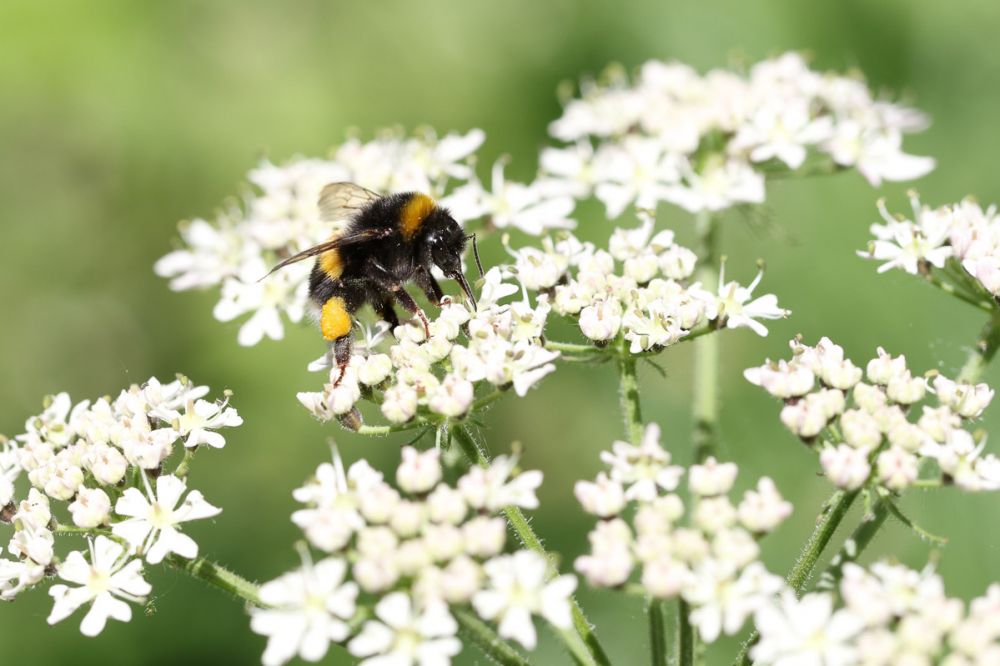 A photo guide to common bumblebees

Entomologist and bee enthusiast Lisa Williams introduces some of the delightful bumblebees we might see this spring...

Bumblebees are large colourful furry bees with a distinctive buzz. There are over 250 species worldwide and there are 27 bumblebee species currently on the British list. 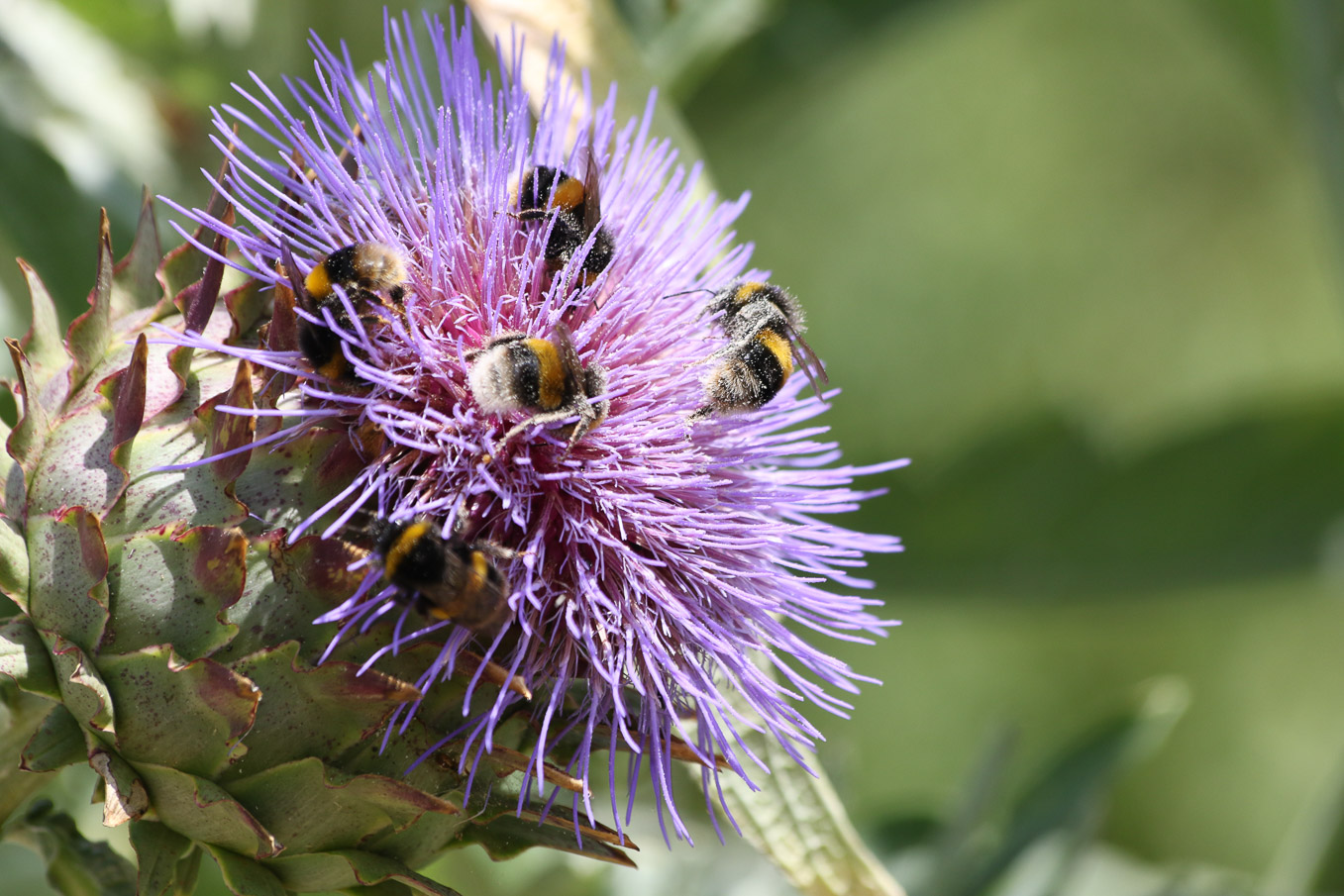 some flowers are particularly attractive to bumblebees

The life cycle of social bumblebees involves the fertilised queen emerging from hibernation in the Spring, and immediately feeding on pollen and nectar.  Her next task after feeding is to find a suitable nest site and create her nest.  The first bees to emerge from the nest are female worker bees, whose role is to provide food in the means of pollen and nectar from suitable flowers.  Later in the season the queen bee lays eggs that develop into new queens and male bumblebees and this signals the end of the nest.  The males mate with the new queens, who then go into hibernation until the next Spring. 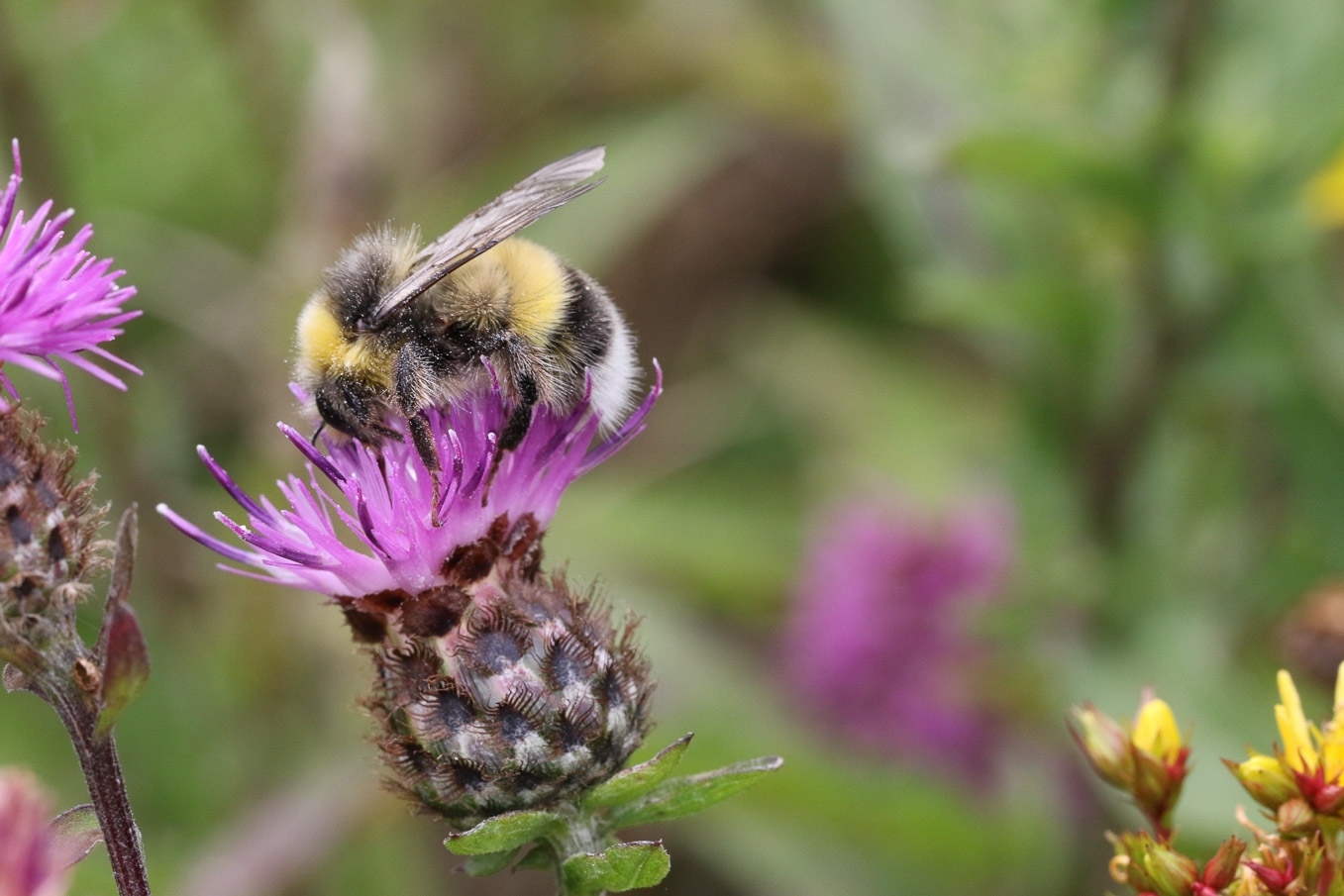 a flower rich garden can attract a wide range of bumblebees

The life cycle of cuckoo bumblebees is slightly different. The females emerge from hibernation about 6 weeks after their hosts. Each species of social bumblebee has a specific cuckoo bumblebee that resembles it in colouration and patterning.  The female cuckoo then has to find a new nest of her host bumblebee and enter it stealthily, to be accepted by the worker bees.  Once accepted she kills or overpowers the queen social bumblebee and lays her own eggs to develop into males and females. Cuckoo bumblebees do not produce workers but use the workers of the nest they have entered to tend to their eggs and feed the nest.  As with social bumblebees once the males and females emerge they mate and the females go into hibernation until the next spring.

Here I will describe some species to look out for in your local park or garden: 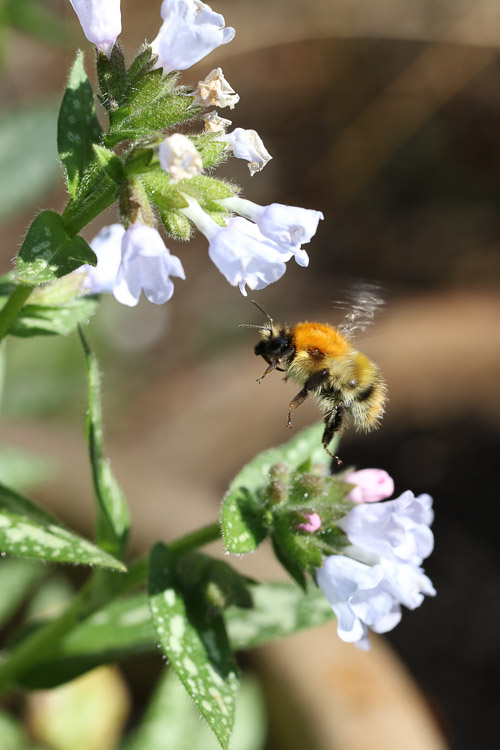 Bombus pascuorum, the Common Carder Bumblebee, is active from March through to October.  Queens, workers and males are all a gingery brown colour with black hairs on the abdomen.  They feed on a variety of flowers including white dead-nettle, clover, brambles and thistles.

Two species of bumblebee that have an orange-red tail are also sexually dimorphic, meaning the males and females are different. 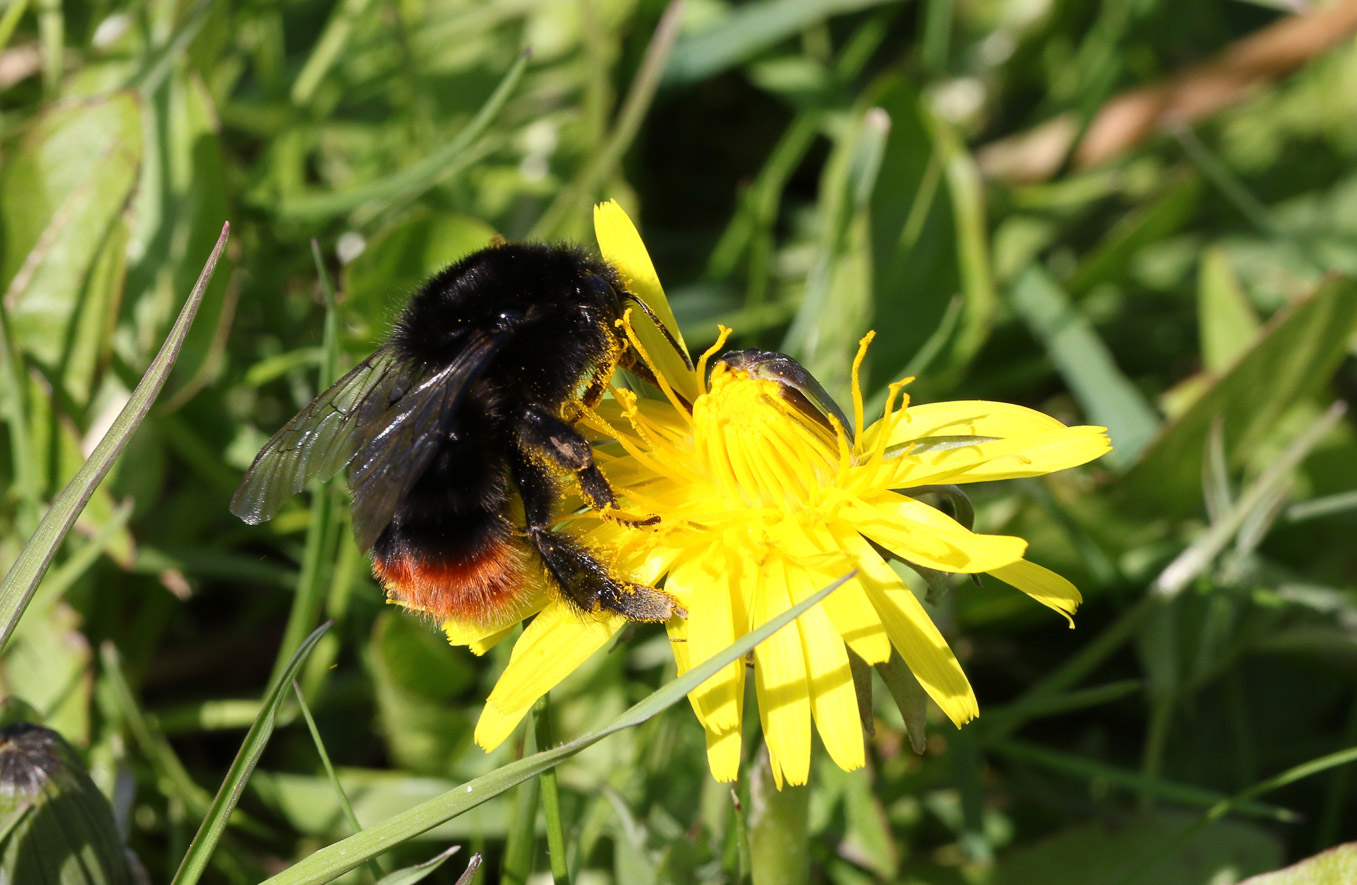 Bombus lapidarius, the Red-tailed Bumblebee, is a fairly large bumblebee that is active from March to August.  Queens and workers have a fluffy black thorax and abdomen and a rich orange-red tail, whilst males also have the red tail but then have a bright yellow collar and bright yellow facial hair making them a very smart looking bee.  They like to feed on dandelions, knapweed and clovers. 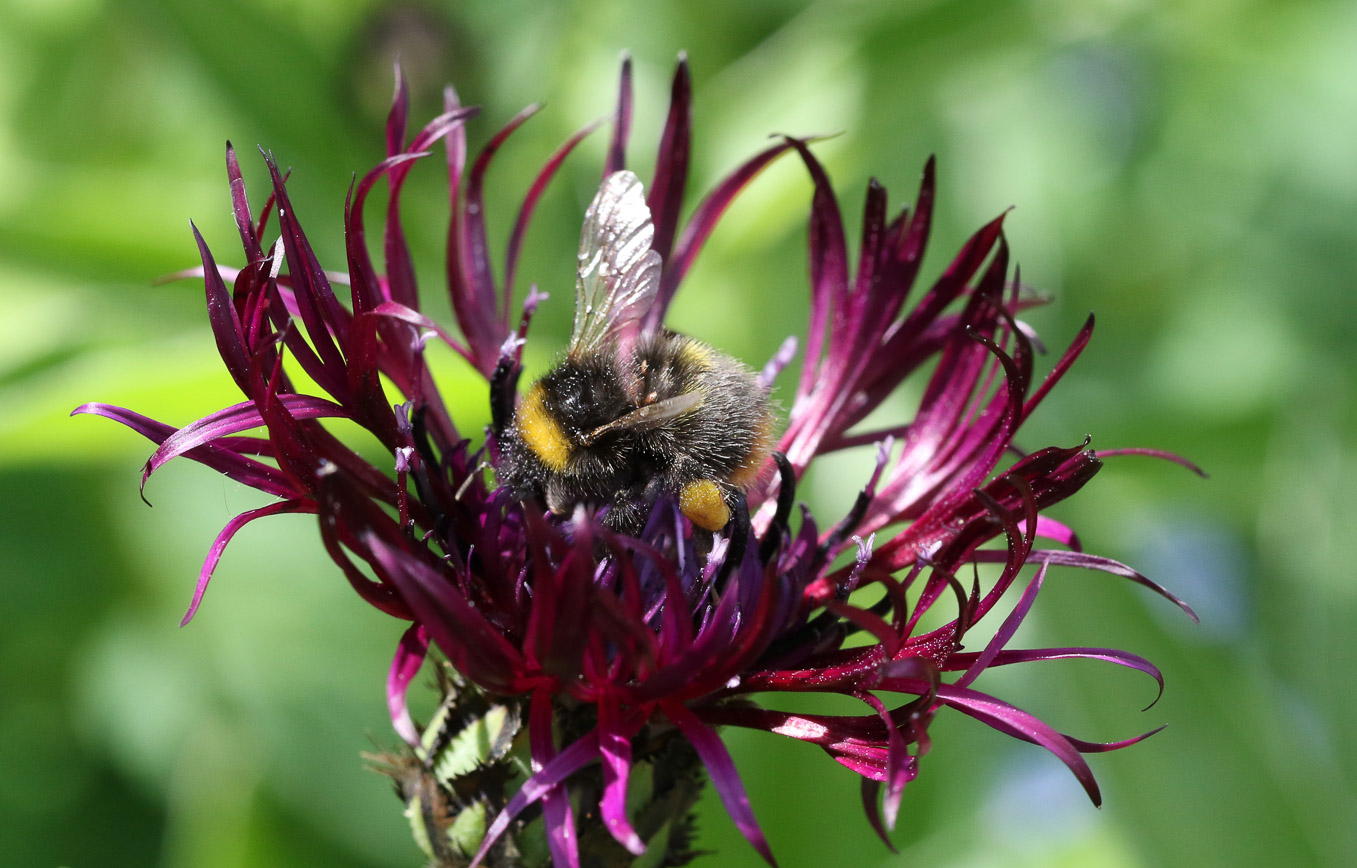 Bombus pratorum, the Early Bumblebee, is a lot smaller than B.lapidarius and is active from March to May, although they can have a 2nd generation later in the year.  Queens and females have a yellow band on the thorax and a yellow band on the abdomen with a red tail.  The males however are a lot more yellow, with yellow facial hair and the band on the abdomen extending further down, but still with a red tail.  They like to feed on currants, sallows, dead-netttles, brambles and geraniums. 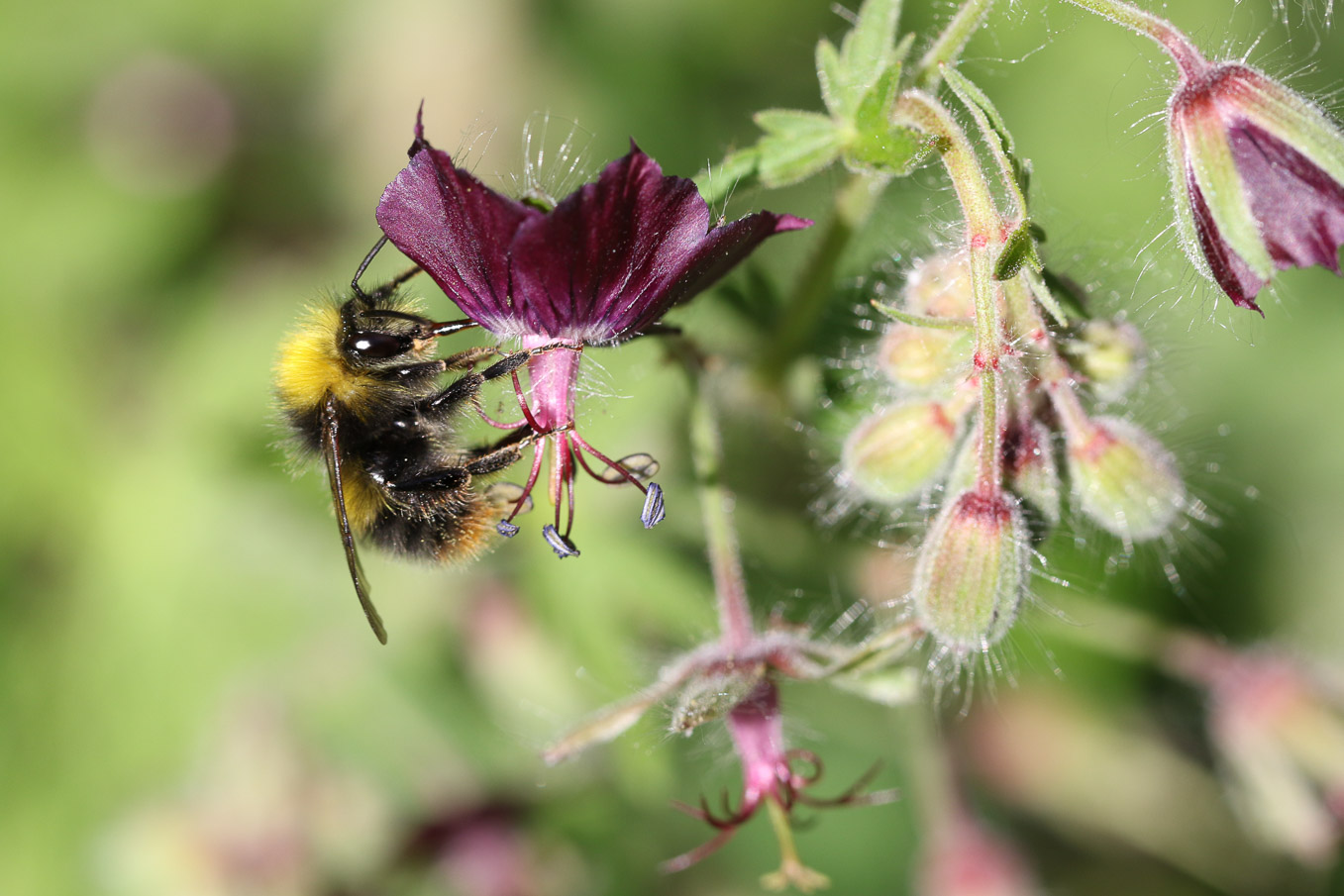 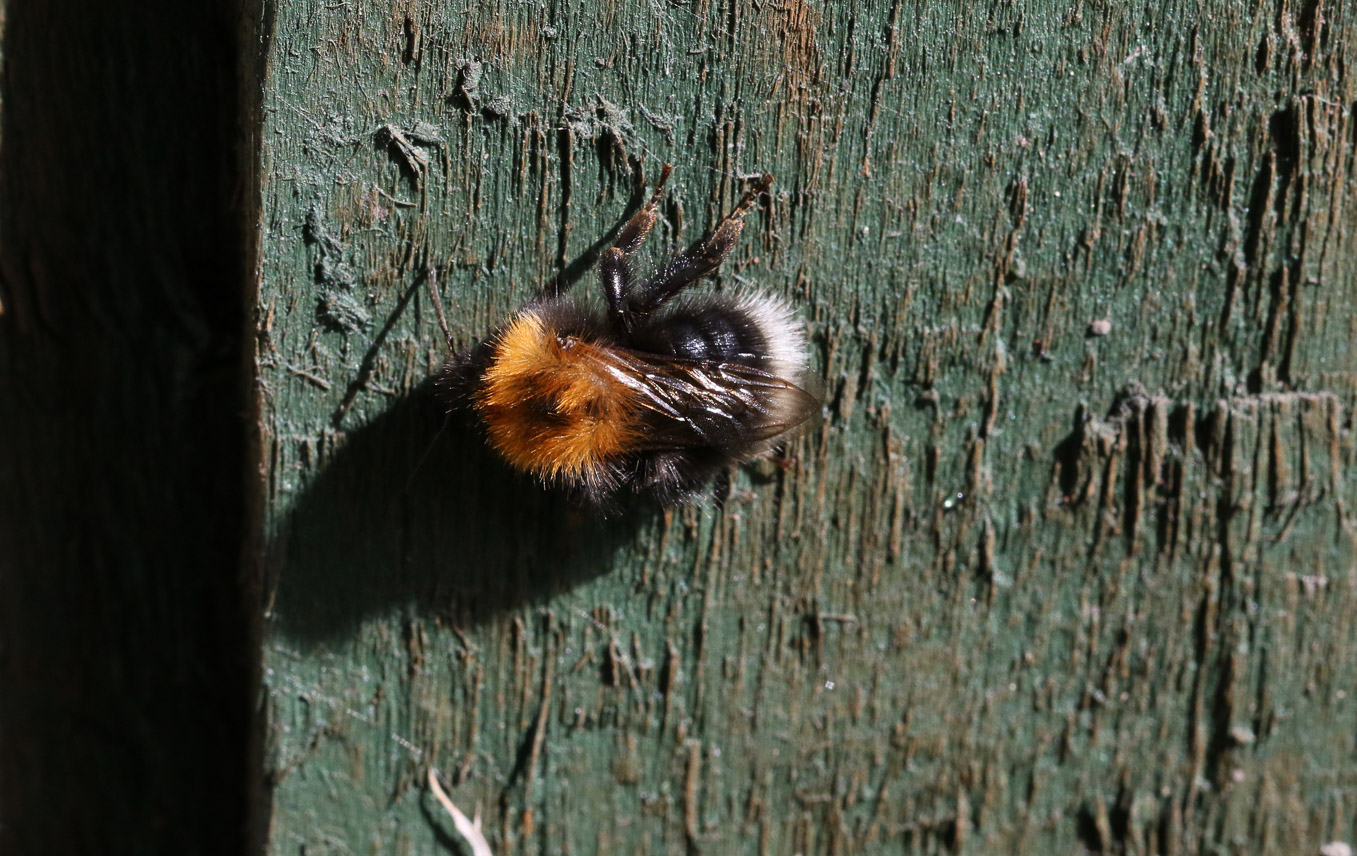 Bombus hypnorum is the Tree Bumblebee, which is a Spring species active from March through to June.  Queens, workers and males have a lovely gingery brown thorax, a black abdomen and a white tail, so are very distinctive.  They like to nest in holes in trees, empty bird boxes and even under eaves of houses.  They feed on brambles, cotoneaster, rhododendron and currants. 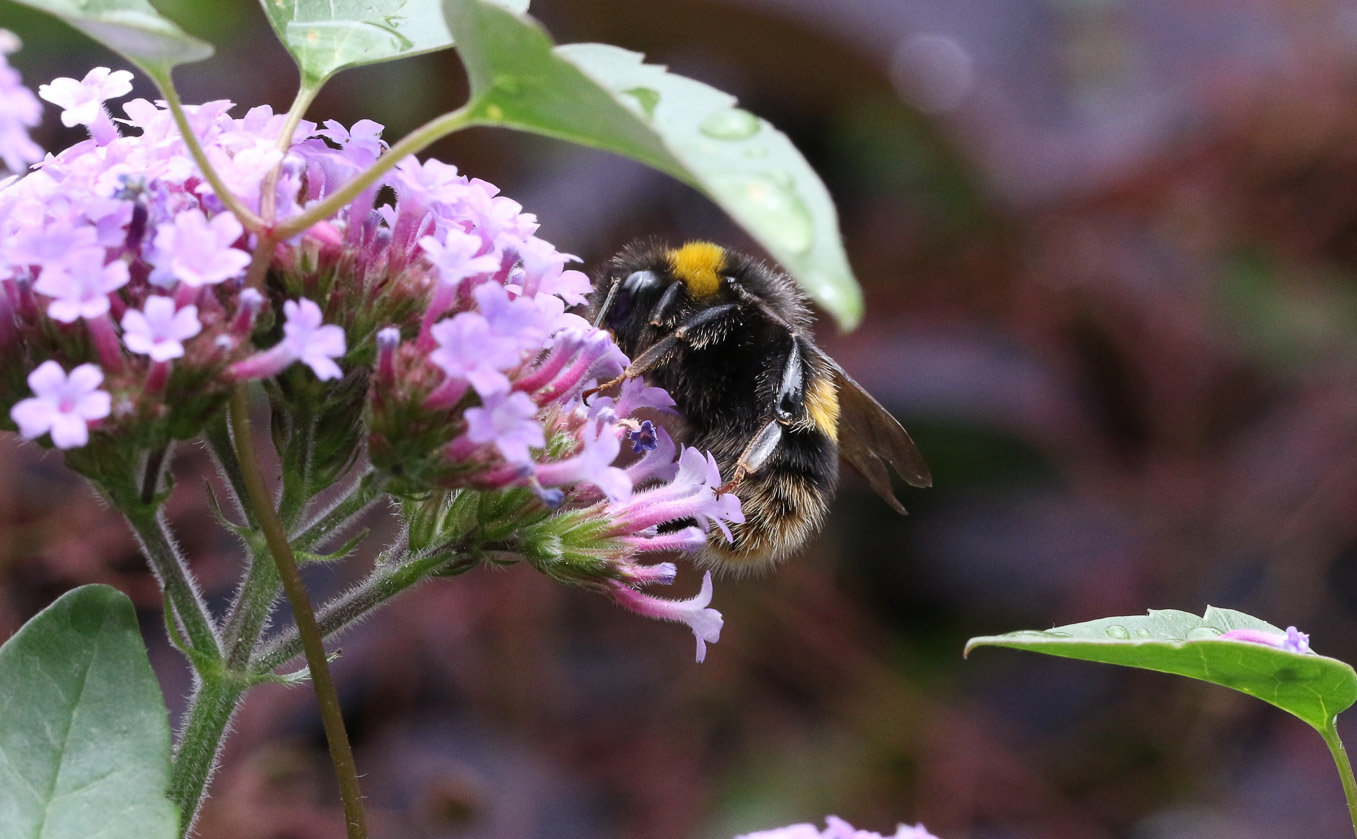 I’m going to talk about 3 species of black/yellow/white bumblebees which can be quite difficult to tell apart.  Bombus terrestris, the Buff-tailed Bumblebee is the most common and can be active all year round with winter nests in the warmer regions of the UK.  It is a large bumblebee with queens, workers and males all having an orange/yellow band on the thorax, an orange/yellow band on the abdomen and a tail that can be buff coloured through to a dirty white colour.  They can be found on a large variety of flowers and flowering shrubs and trees being active most of the year. Bombus lucorum is the White-tailed Bumblebee, and is active from March through to August.  They are slightly smaller than B.terrestris and are sexually dimorphic.  Queens and workers have a lemon yellow band on the thorax and one on the abdomen and then a white tail, whereas males also have stunning yellow facial hair that makes them very distinctive.  They like to feed from sallows, thistles, knapweeds and brambles. 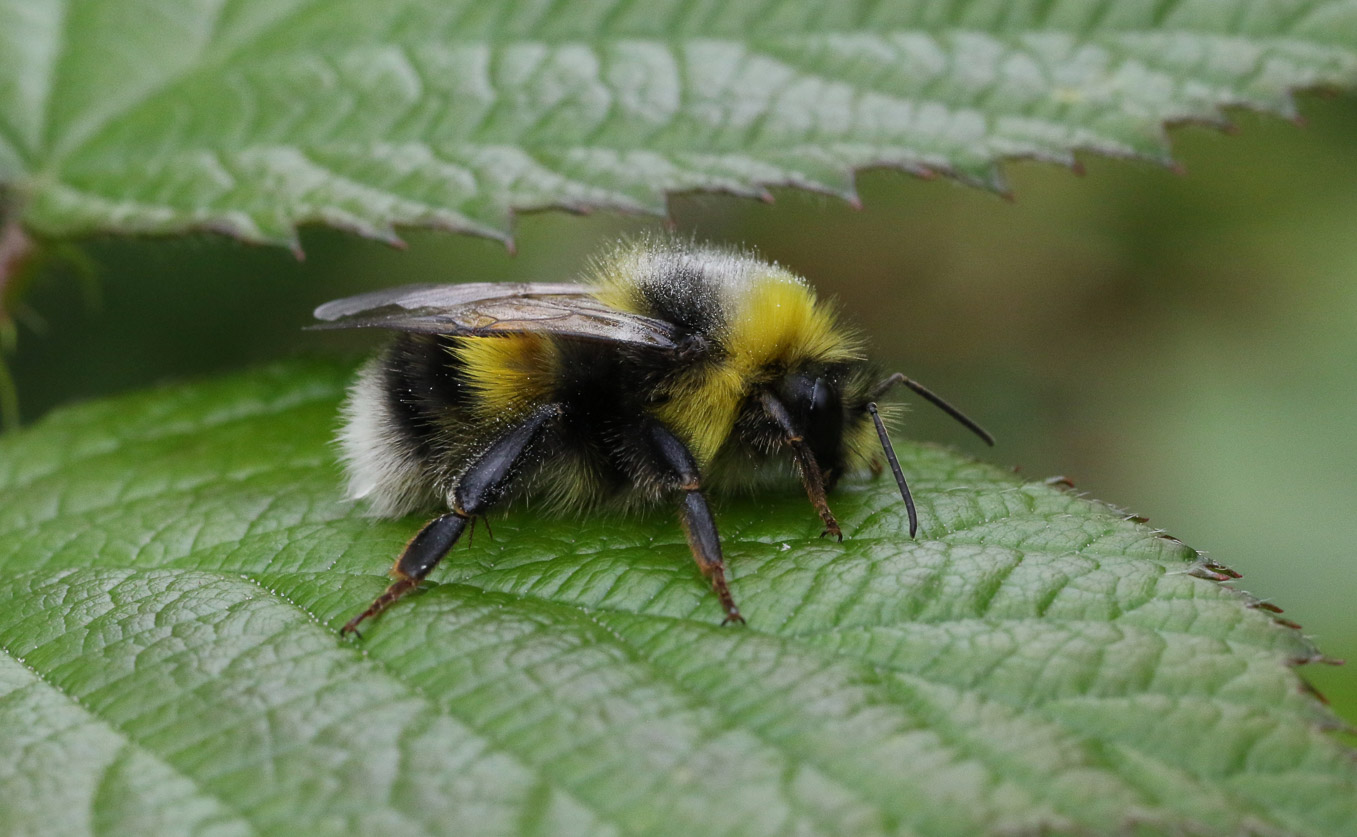 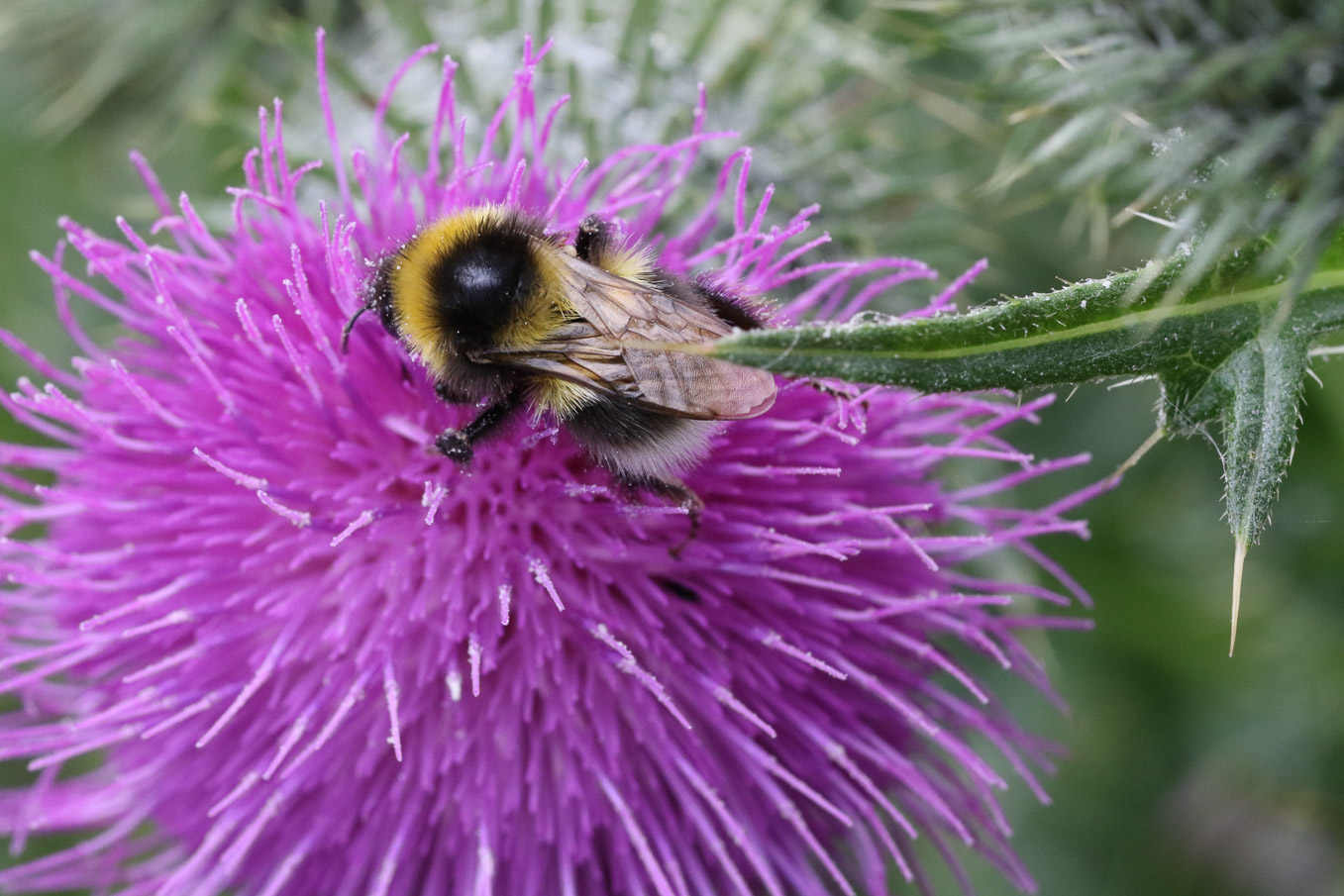 
Bombus hortorum, the Garden Bumblebee, can be distinguished from B.terrestris and B.lucorum by counting the number of yellow bands. Queens, workers and males have 2 yellow bands on the thorax and 1 on the abdomen, 3 in total, then a white tail.  They also have a very long face.  They are active from March until June, occasionally having a 2nd generation on the south of the UK, and they typically feed on dead-nettle, bluebells, clover, foxgloves and thistles. 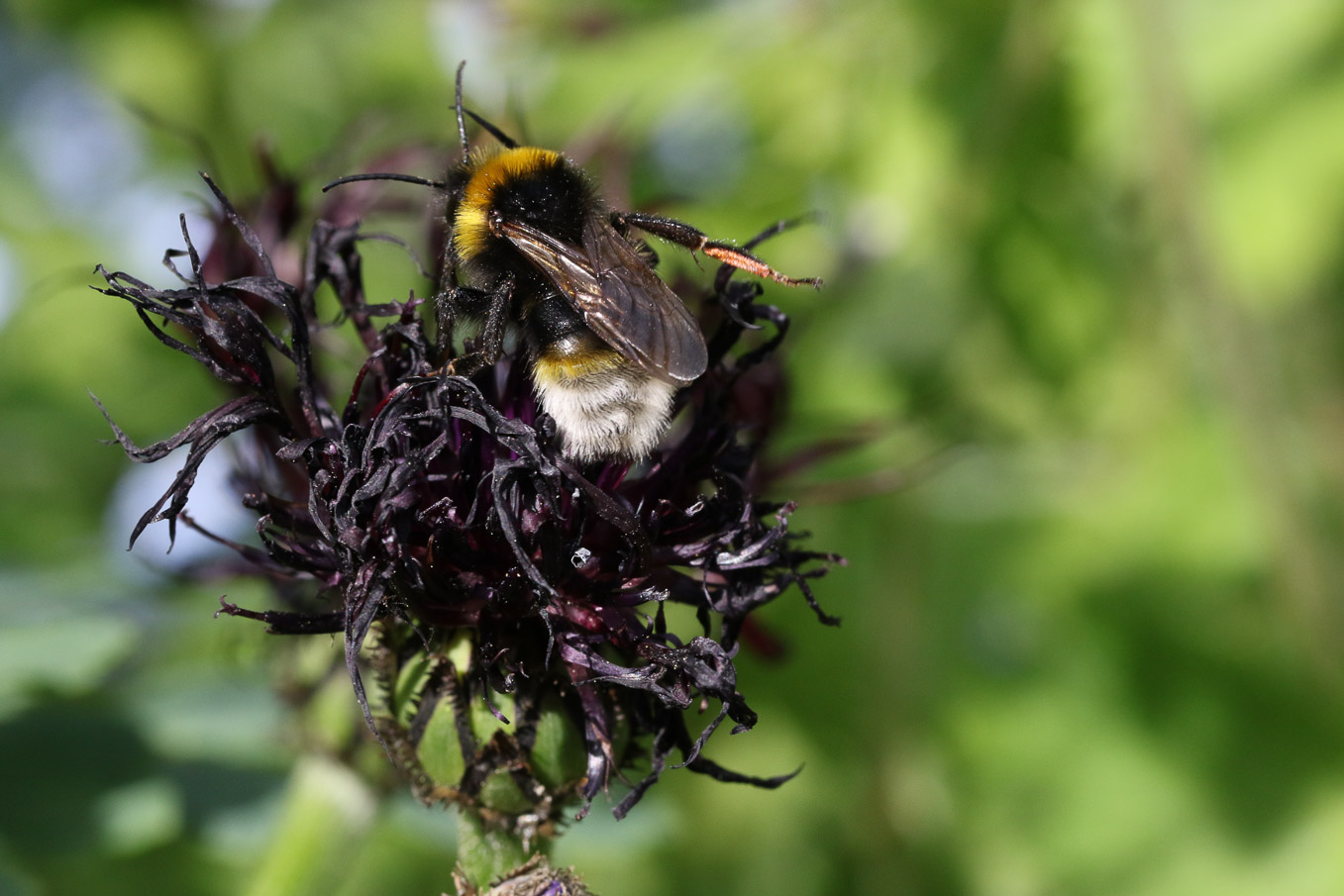 I will mention a couple of species of Cuckoo Bumblebee for you to try and spot.  Bombus vestalis, the Vestal Cuckoo Bee, is the social parasite of B.terrestris and the commonest cuckoo bumblebee.  It can be active from March until September and is found feeding on sallows, dead-nettles and brambles. It is distinguished from B.terrestris by having a very obvious yellow band at the base of the white tail. 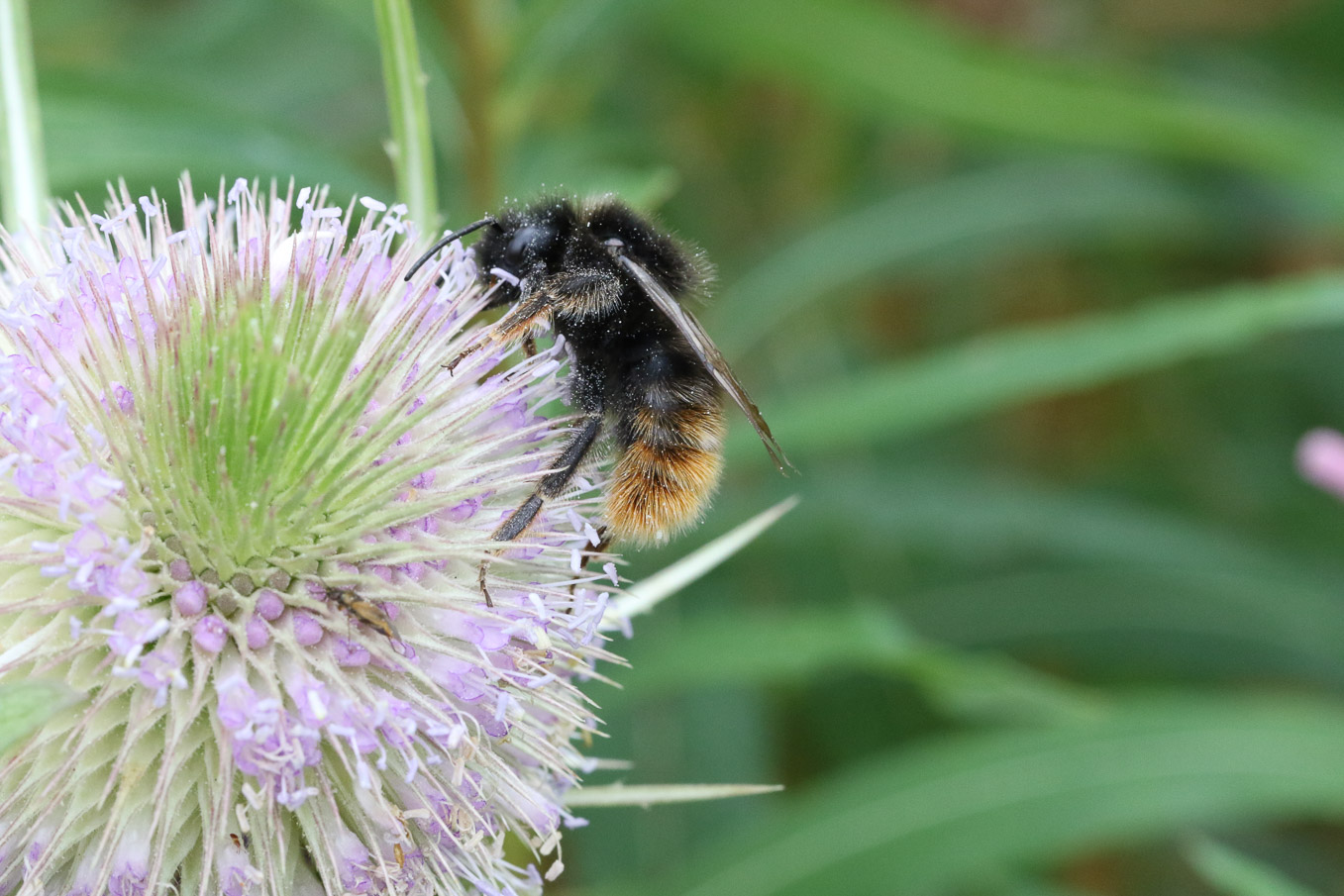 Bombus rupestris, the Red-tailed Cuckoo Bee, is the social parasite of B.lapidarius for obvious reasons, it is all black with a red tail.  It has much darker wings than B.lapidarius and is not as fluffy, you can see the shiny body through the hair.  They are active later than other bumblebees, from June until September and visit the flowers of teasel, bramble, scabious and ragwort. 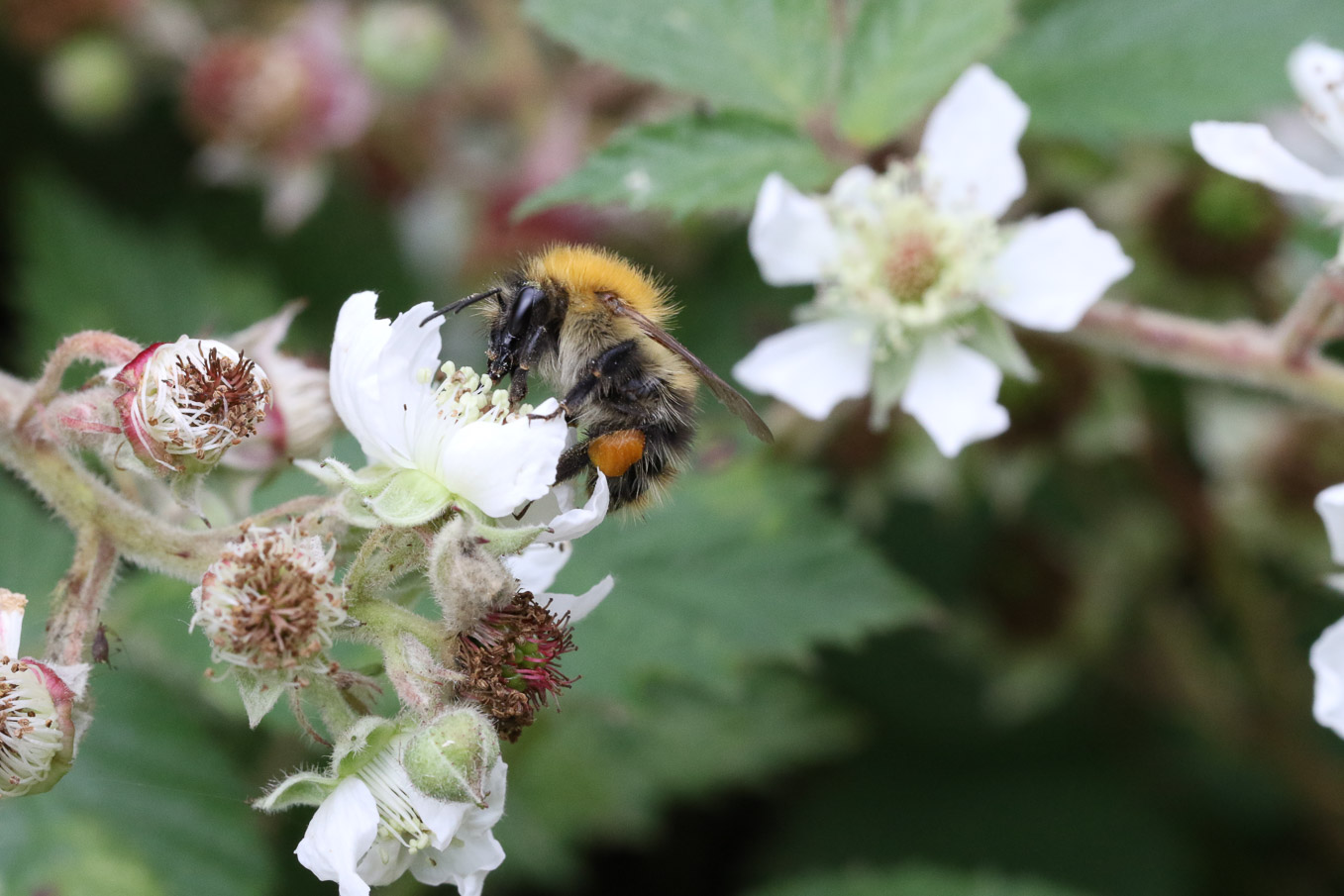 It is not always easy to tell apart males and worker bumblebees in the field. A good thing to look for is whether the bumblebee is carrying pollen on it’s back legs. If it is then it is a worker bumblebee as males and cuckoo bumblebees do not collect pollen in pollen baskets.  The pollen can be a variety of colours depending on what flower it has been collected from!  Queen bumblebees are usually easy to tell apart since they are a lot larger than workers and males.  Another interesting point is that male bumblebees do not sting.

I hope you have enjoyed my guide to common Bumblebees. If you would like to learn more then I recommend looking at the Bumblebee Conservation website.

If you would like to learn more I recommend the Flickr site of Steven Falk and the book Field Guide to the Bees of Great Britain and Ireland by Steven Falk and Richard Lewington.