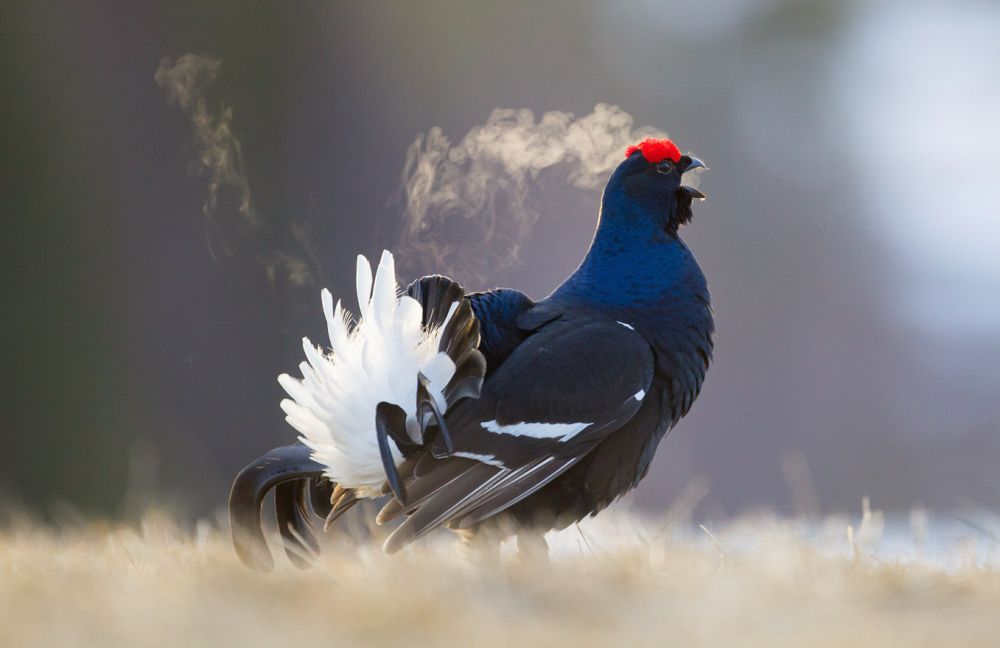 How I got the shot....Black Grouse

Always wondered how to create the perfect set for photographing Black Grouse?  Oliver Smart talks through the journey to capture these magical birds and his favourite image of all time.

The result of six days work with a small lek of over 20 males & a few female grouse. A perfect position, behaviour, light and composition produced a shot that I have always been very happy with.

Even though the UK holds good numbers of Black Grouse, there are huge numbers in Scandinavia. My target location was Kuusamo in Finland travelling with Finnature. Just observing these handsome grouse is a pleasure in itself but getting close and personal with groups as they go about their lekking displays is something very special indeed. 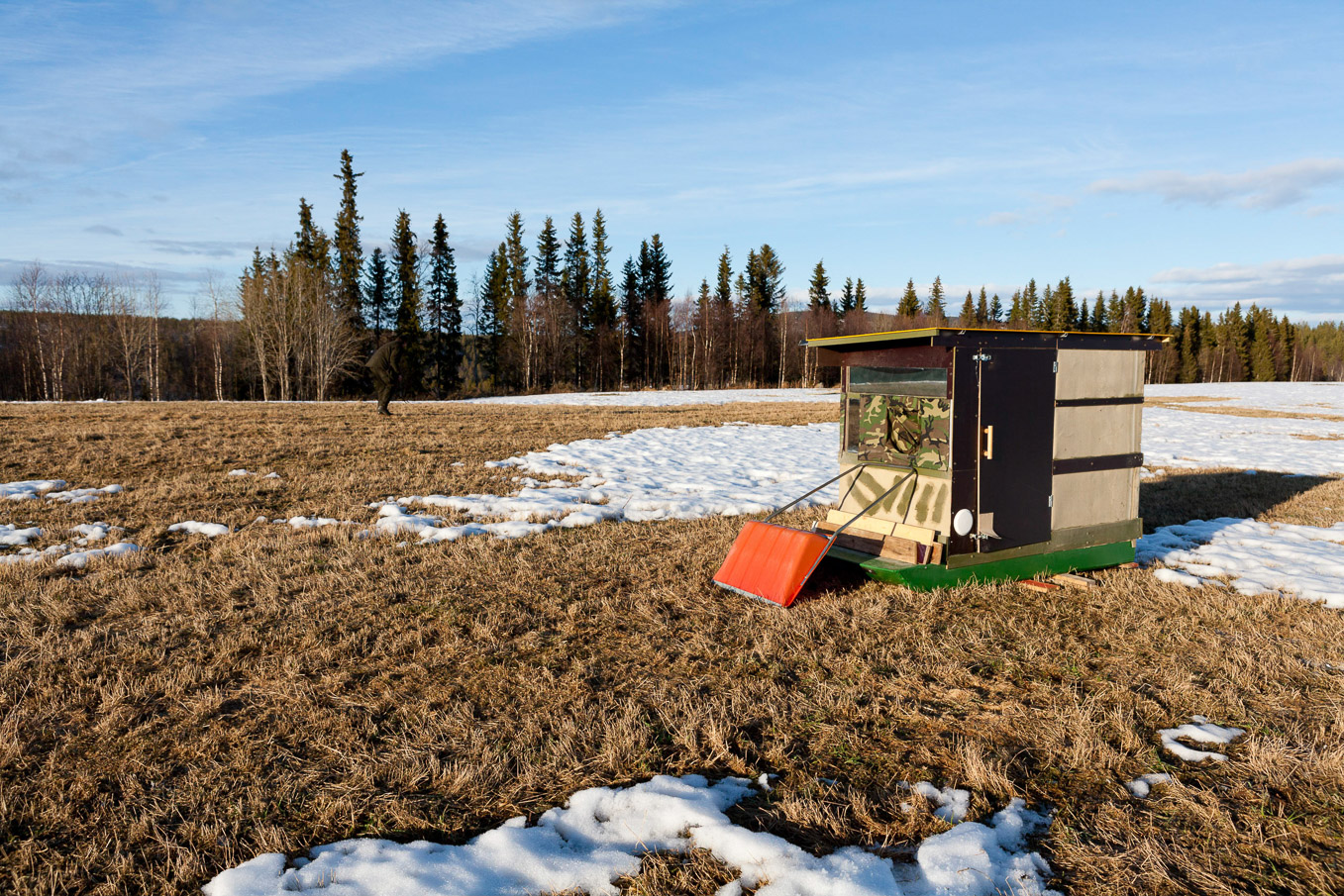 Initially when I arrived at the hide, I was so excited about the comfort, space and wonderful vista. It was only after shooting for the first session that I realised something was not quite right. 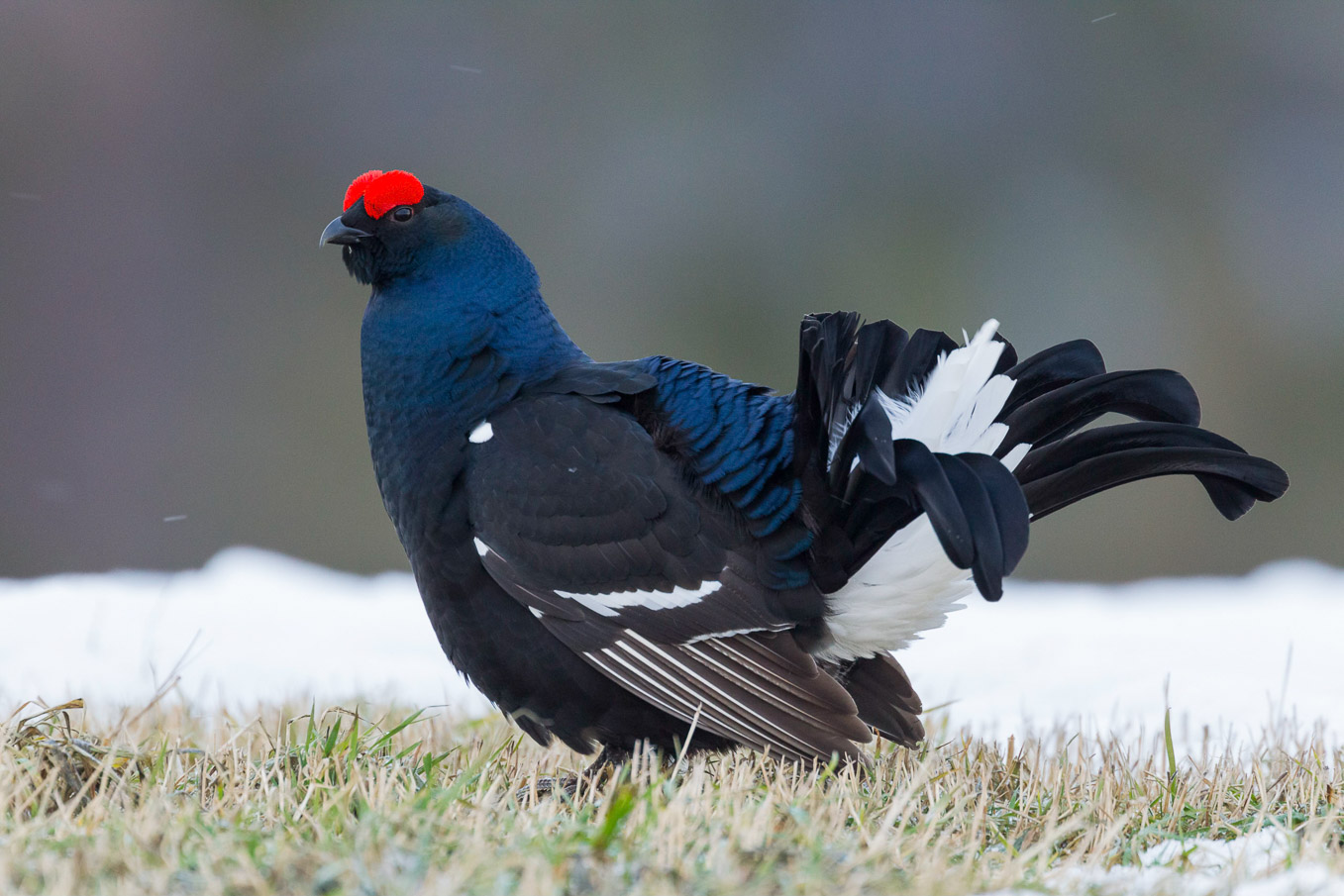 Okay, so it’s sharp and it’s colourful but it is a standard portrait and there is nothing particularly inspiring about this image.

All set up in the comfortable sledge hide, which can be tractor or hand-drawn across the terrain during the autumn, I was ready to start shooting. With camera poised and eyes and ears alert, the first sounds were those of males thudding into the arena. As I peered through the twilight; they start early (4am perhaps in April), I picked out several birds sizing each other up. After a few moments the bubbling started, their distinctive lekking calls, and then squawk and clash two males came together in blows! It’s a truly remarkable display and once the light had improved, I was able to start to tentatively take the first images. 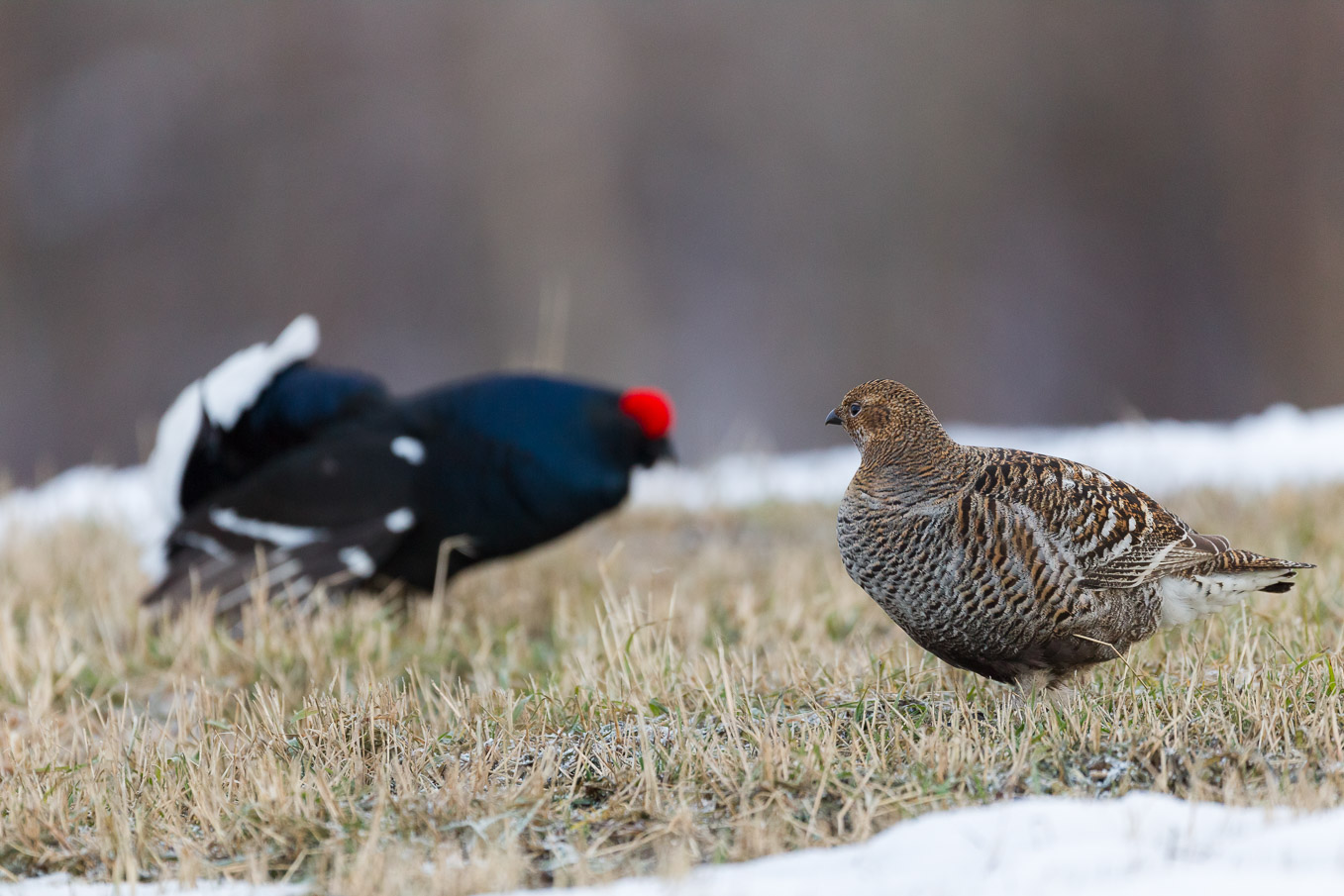 The aggression is to show off their strength to onlooking females, perhaps lurking still in the surrounding forest although they will come to the arena too for a ringside seat. 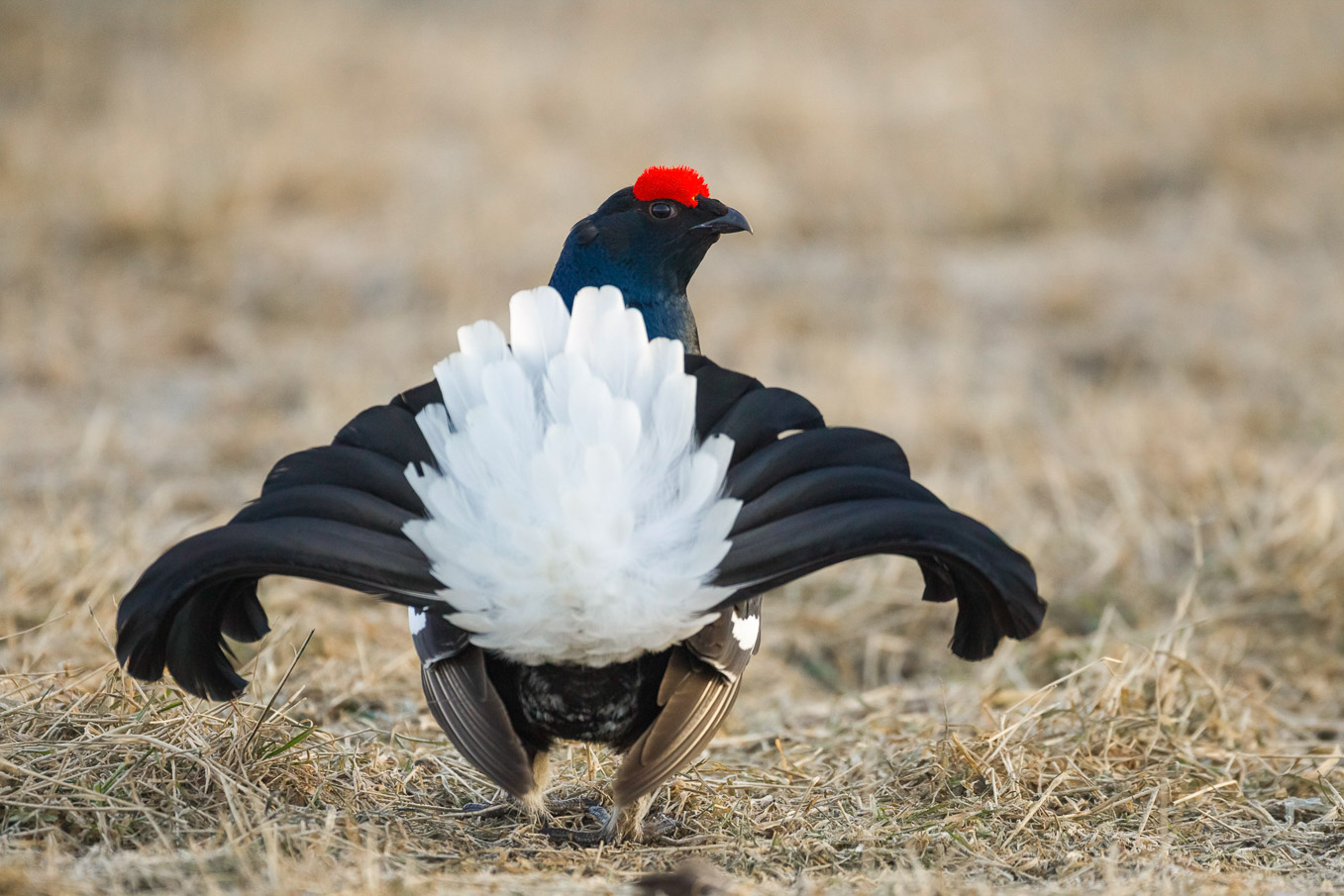 The first couple of sessions I was taking pleasing images but the ‘wow-factor’ was missing. The steeper angle created more depth-of-field which rendered more background in focus.

Having established something was not quite right with the angle of view, I questioned my guide who agreed, and we decided to build our own hide at ground level. I mean we’re only talking a few feet difference but the resulting perspective would change everything, and for the better too! 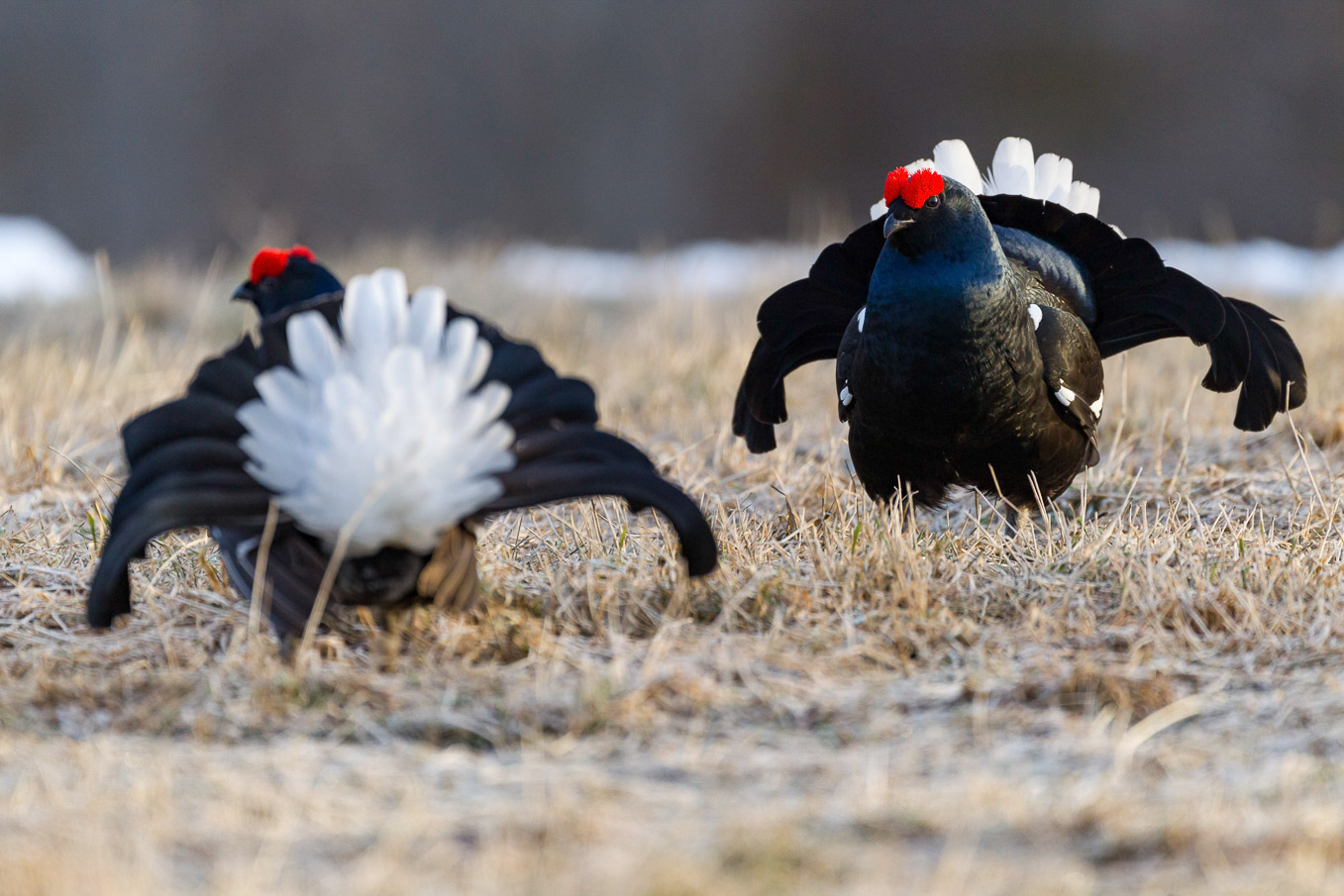 I could even make out the breath of calling birds, however due to the angle from the hide, I was not able to record it on camera.

To ensure there was no disturbance to the birds we completed this after they’d finished lekking which by about 08:30 is complete. We sourced the materials and began the relatively quick job of putting together our new hide, where now we would be lying down and not sitting so we needed sleeping bags and foam matting too.

The second very important part of this process was to ensure our ‘set’ was clean. And by that we needed to ensure there was nothing that could potentially spoil our images even if the bird and background was perfect. Any stray tall piece of grass could warrant the perfect shot useless so my guide drew the short straw (no pun intended) and proceeded to cut all straggly pieces of grass with a pair of shears. 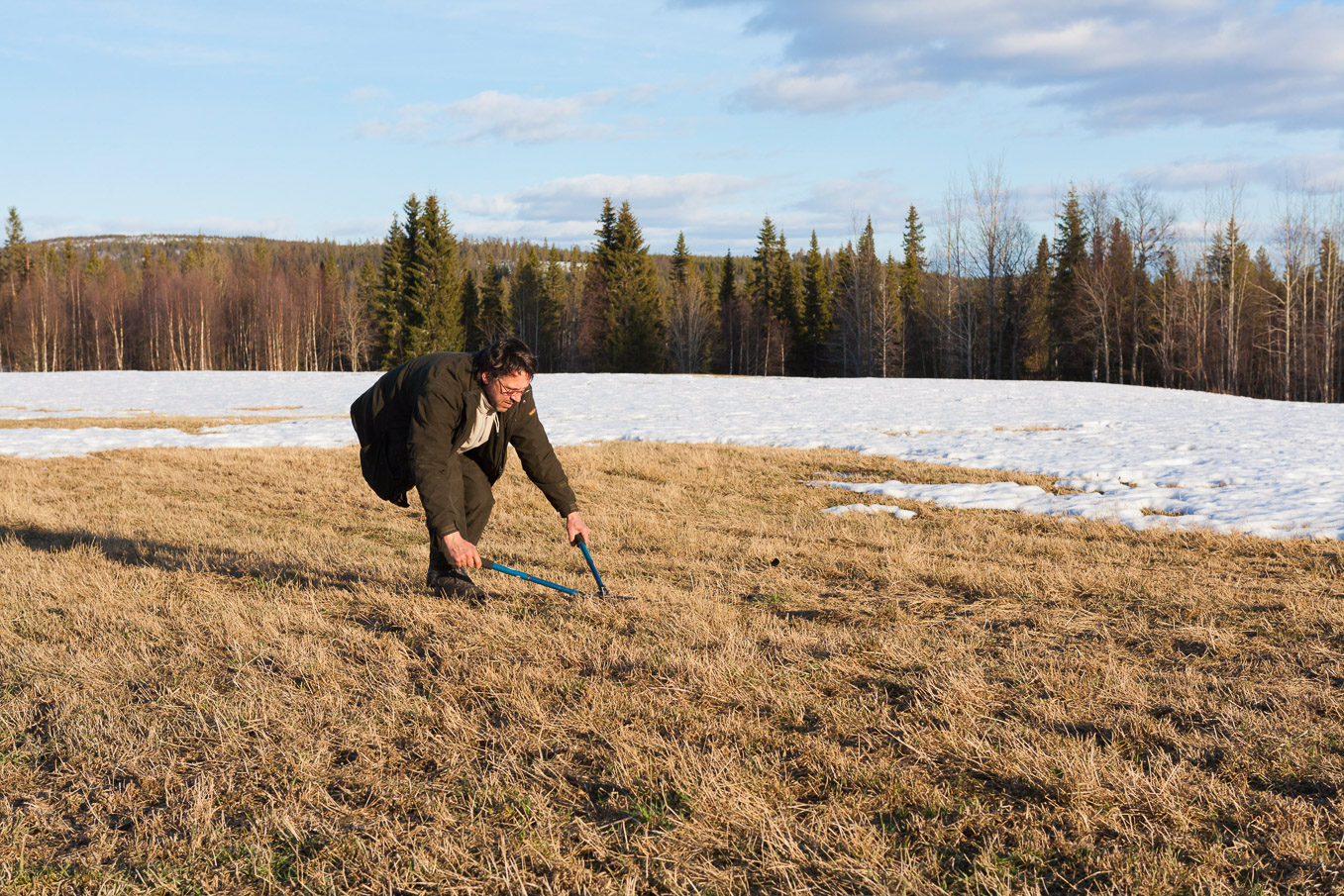 Olli Lamminsalo, A dedicated guide who was willing to go the extra lengths to ensure the set was in perfect condition. 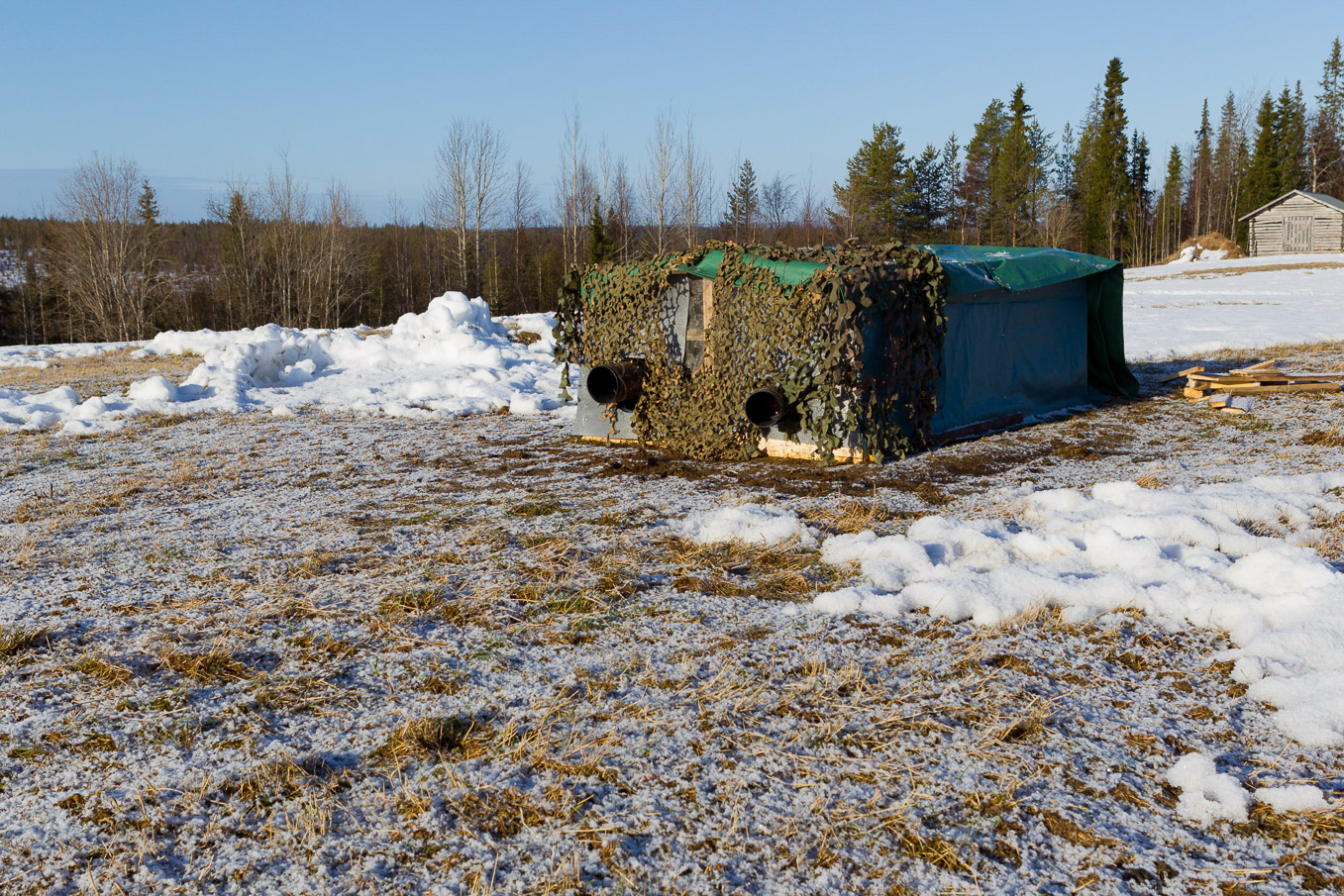 A professional job, even with some camouflage netting! This is long enough for my 6ft 6in guide and all our gear. Between the lenses is a small window allowing us to get a better view of the action so we could be ready to shoot.

Finally, we wanted to ensure we were looking towards the rising sun. This was fundamental for that backlighting we desired and to give the golden glow around the subject. A quick check on The Photographer’s Ephemeris app was enough to ensure we had the angle of the hide pointing directly to a small copse at the edge of the field that would be the dark backdrop we wanted with the sun rising behind. 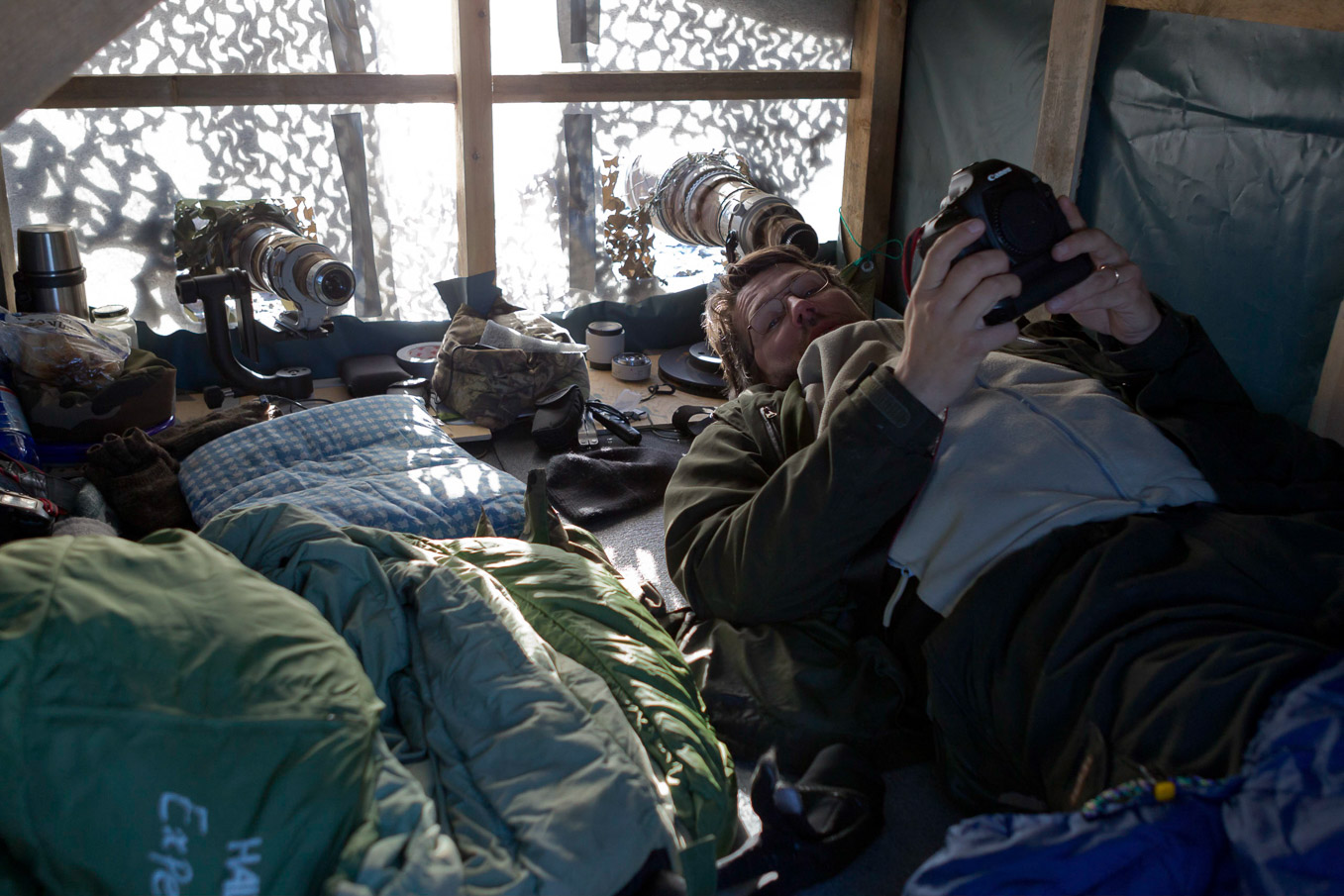 Comfort is something that will keep a photographer going for a lot longer, so this was vitally important we were warm and dry and well fed and watered. Everything we needed was here for our daily five-hour hide sessions.

Birds in these conditions are used to small changes and they hardly even noticed the addition to the scenery. One thing we made certain was that where we positioned the hide was not in an area that had been used by the lekking birds. This could have been a male’s territory which we did not want to interrupt, and as it happened, where we wanted the hide was clearly further away from the birds as we needed space to shoot.

Once set up, again at some ungodly hour, we waited for the birds to arrive. When lying down the angle is much reduced so there is a very narrow depth-of-field and also your perspective changes. You have to be very quick to lock on to a bird when it begins to call as the breath will quickly disappear from the beak which looks a little odd. 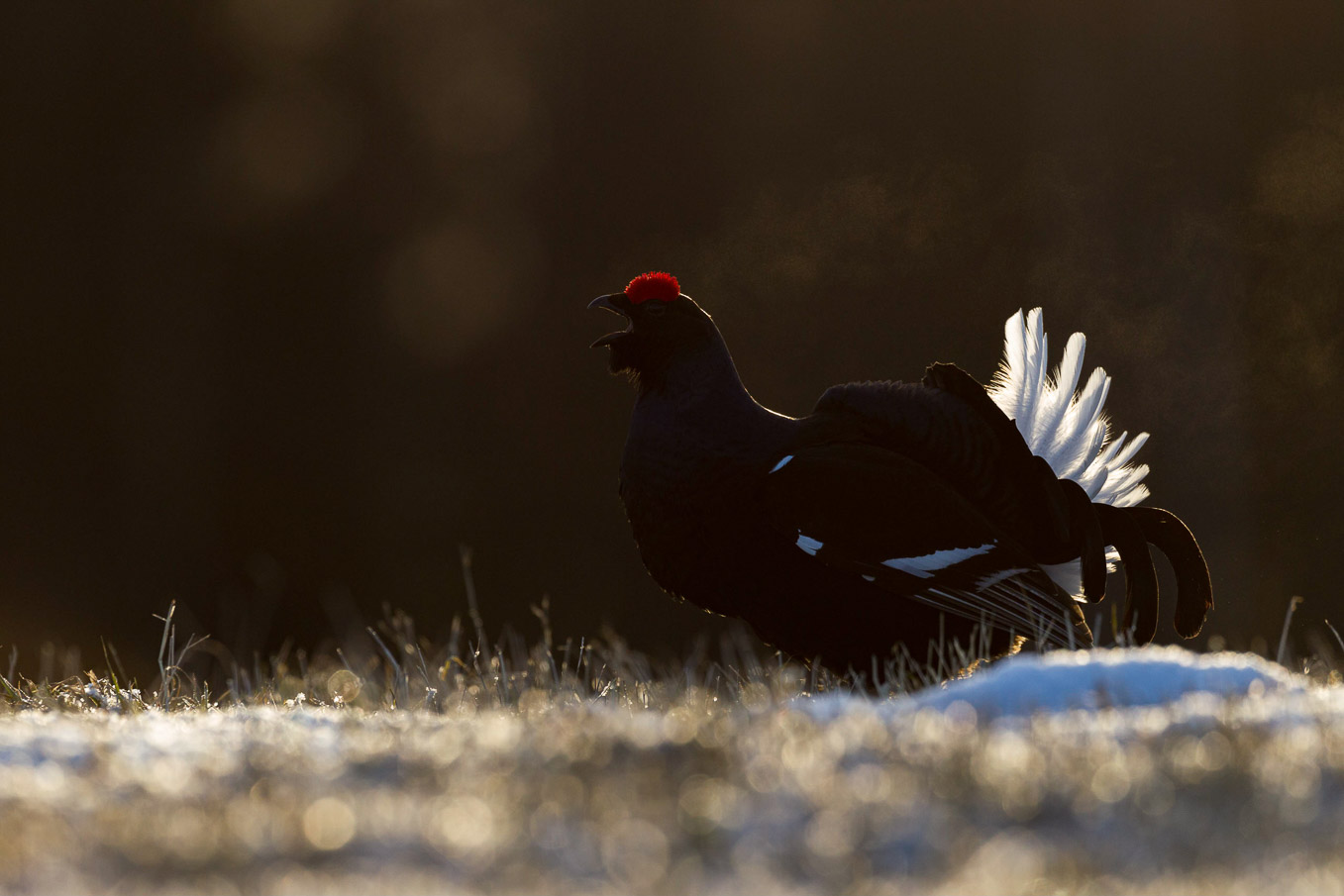 I focussed on this male just a little too late and the breath was already disappearing behind the bird. This was not quite good enough, so I needed to increase my speed at locking on but also predicting which bird might call next was a good tip for success. 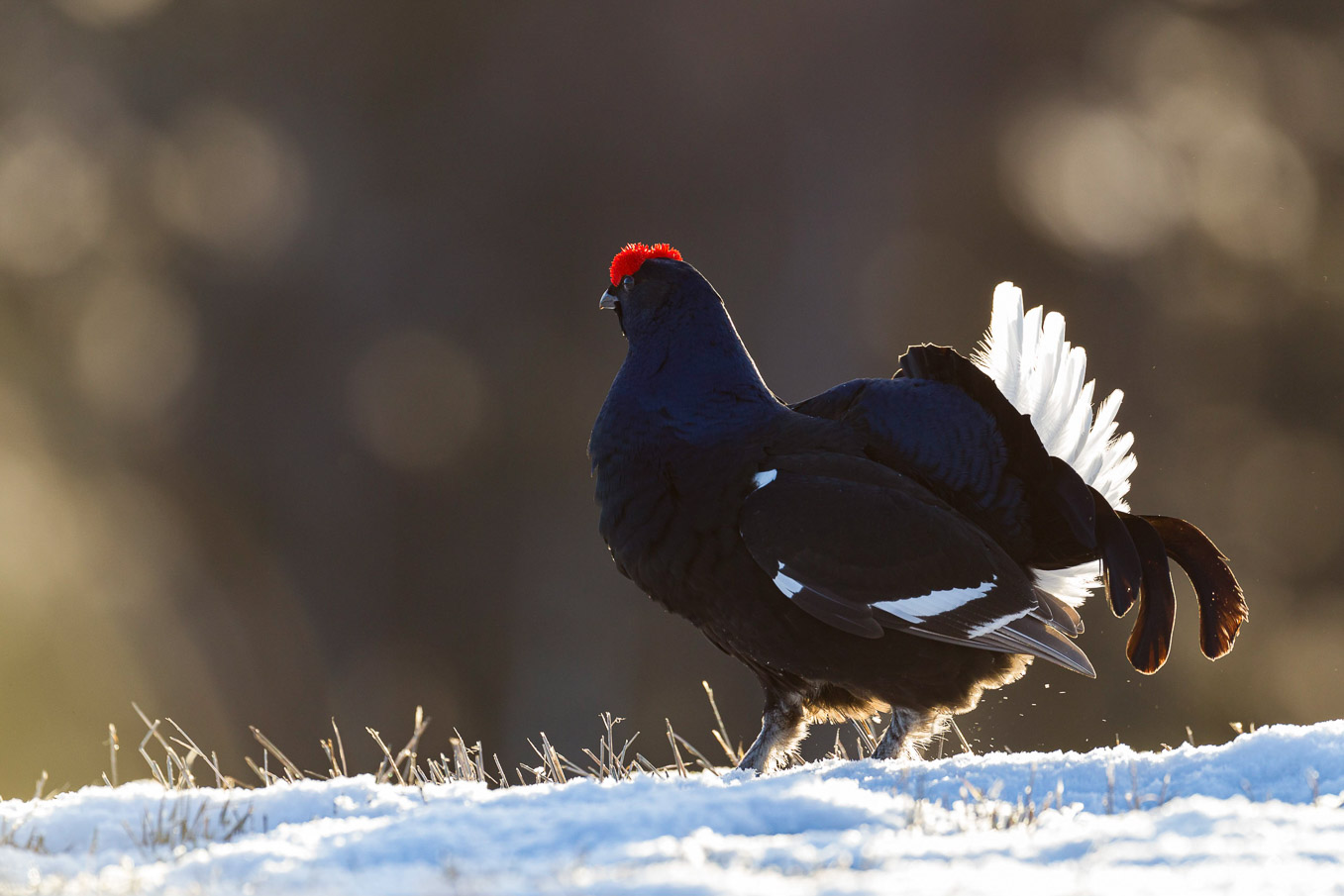 Of course try and get as many different shots as possible. I was always thinking about nice compositions or showing a little more habitat.

The lighting was two-fold, firstly the direct sunlight from behind the subject, which would often render them in silhouette (depending on the camera’s exposure), but secondly, we had the advantage of some snow and daily frost on the ground too, which added an extra dimension; reflected light. This is fantastic for shooting wildlife and offers an additional tool for a photographer.

Taking this even further the opportunity that snow and frost creates is something you don’t see until the action starts. And this is backlit particles in the air when the birds flap their wings and attack each other! Action-packed and full of drama. I don’t actually mind the cutting off of the birds wings here; it actually frames the shot nicely and brings your attention towards the displaying male grouse on the left. Particles of snow still in the air, long after the battle had finished. I can now use this image as though it was actually shot during a blizzard. Also notice how the foreground has blurred completely with the low perspective.

That perfect shot is not always going to happen, no matter how much effort you put into something. Planning and research, practice and patience and all great components but you still need the performance and the pressing of the camera’s shutter button to complete the job. Thankfully this happened perhaps more than once during the several days of shooting.

With my Canon 1D MkIV camera and 500mm f/4 lens my speed hovered around 1/500th of a second and I had to keep the aperture wide open at f/4-5.6. This would naturally render foreground and background perfectly out of focus but I was always worried about any movement in the subject. Apart from the fighting scenes the birds were surprisingly still so my only worry now was focussing accurately and composing the shot as quickly as I could without disturbing any birds through any lateral camera movement. Although perhaps not my ‘famous grouse’ shot it is one of my absolute favourites. I simply love the clean image with beautiful light, a super breath formation and the structure of the birds’ wings and tail feathers. Remember that I am an ornithologist as well so appreciating and studying the birds is as much of an interest to me as taking the picture. The shot that I envisaged; my ‘smoking grouse’. The central composition (rare for me) and the angle of light actually provided more detail in the foreground of the bird than I might have expected. The cropped grass, light hitting the tail feathers and the balance of light and dark in the woodland behind has created, for me, one of my best shots I’ve taken.

The results from the six-day shoot were very rewarding indeed. Not only was I able to experiment, think on my feet and execute my vision successfully but I came away with a range of material that would be very useful for future work. And one thing that perhaps I wasn’t expecting was that after 08:30 I had the rest of the day to watch and photograph other subjects. Long days indeed but so very worth it.