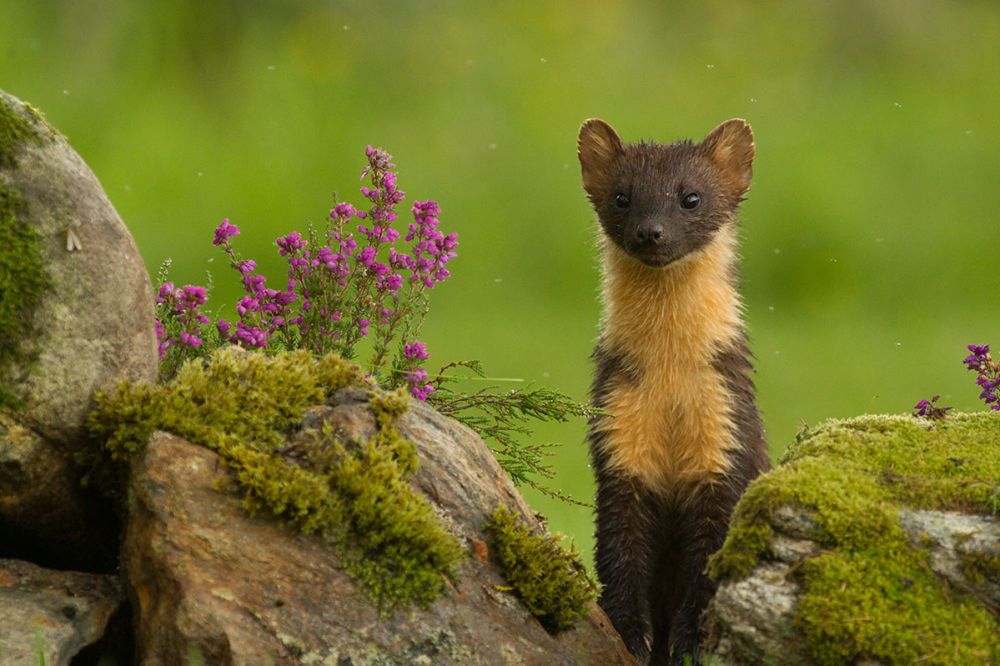 Catching up with the elusive pine marten

Elusive and shy, you could go a lifetime without seeing a pine marten. Mammal enthusiast Nick Martin though was determined to catch up with this most enigmatic little predator. 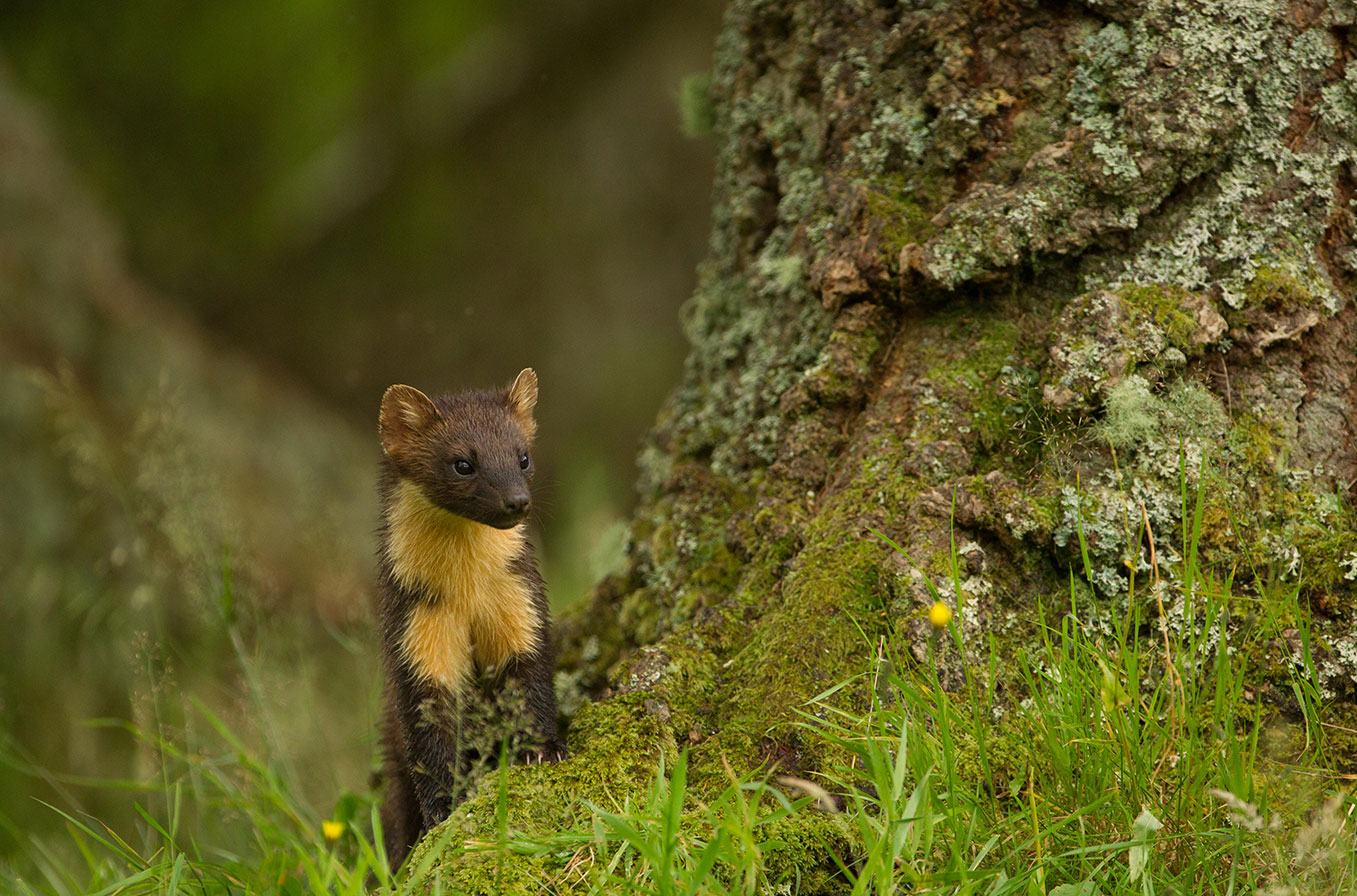 Twelve long hours sitting in a canvas hide staring at chicken wings screwed to a tree branch were taking their toll. A flight to Dublin, car hire, B&B and guide fees had culminated in this opportunity to see, here in the woodland of Ireland’s Cooley Peninsula, one of Britain’s rarest mammals. I was uncomfortable and beginning to lose hope that it would appear when out of the gloom a dark form appeared and climbed the branch. I watched depressed as the climbing fox ate all the chicken and then proceeded to systematically clear out all the other bait that had been hidden around the hide.

“It's not often you photograph a fox up a tree” my guide pointed out as he tried to dull his disappointment which probably matched my own. He knew though that all my effort and expense had been directed towards one target alone…the pine marten. 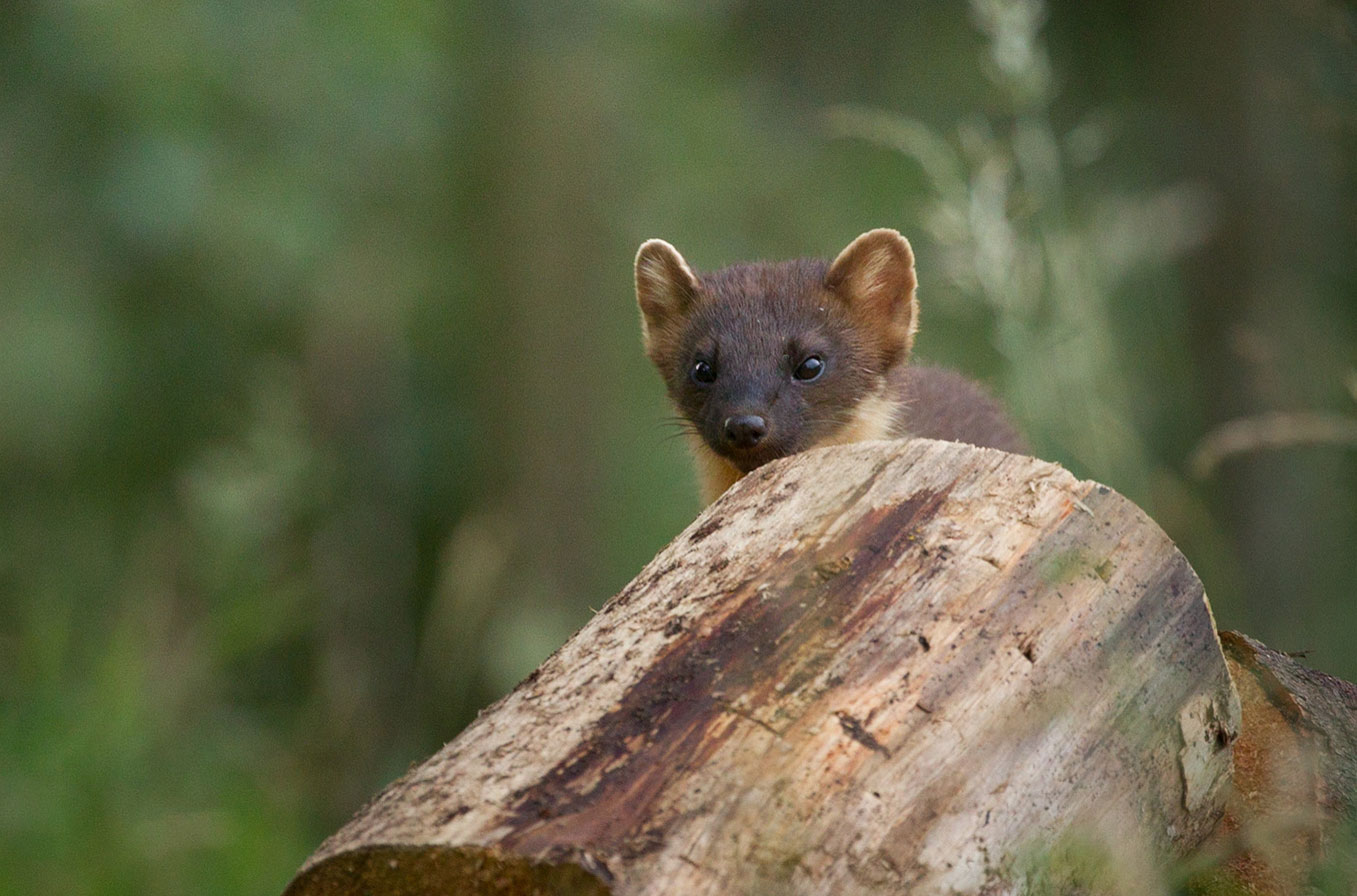 After years of persecution, pine marten are extremely shy of humans and rarely come out during daylight hours.

As with all setbacks it made it all the sweeter when I did finally connect with this beautiful animal. Several days and nights on the West Coast of Scotland afforded me great views of a family of martens and reinforced my admiration of this wonderful animal. With rapid expansion of its territory in Scotland and reintroductions planned or in action in Ireland, Wales and England the pine marten may well be in or coming soon to a woodland near you.

I love the whole mustelid family of mammals and little is more thrilling than seeing a, weasel, stoat or otter. I obviously have mixed thoughts when seeing mink and so far I have yet to see a wild polecat except as unfortunate roadkill. Pine marten though might just be the best of the lot and when people ask me my favourite animal its always a toss up between these and wild boar. 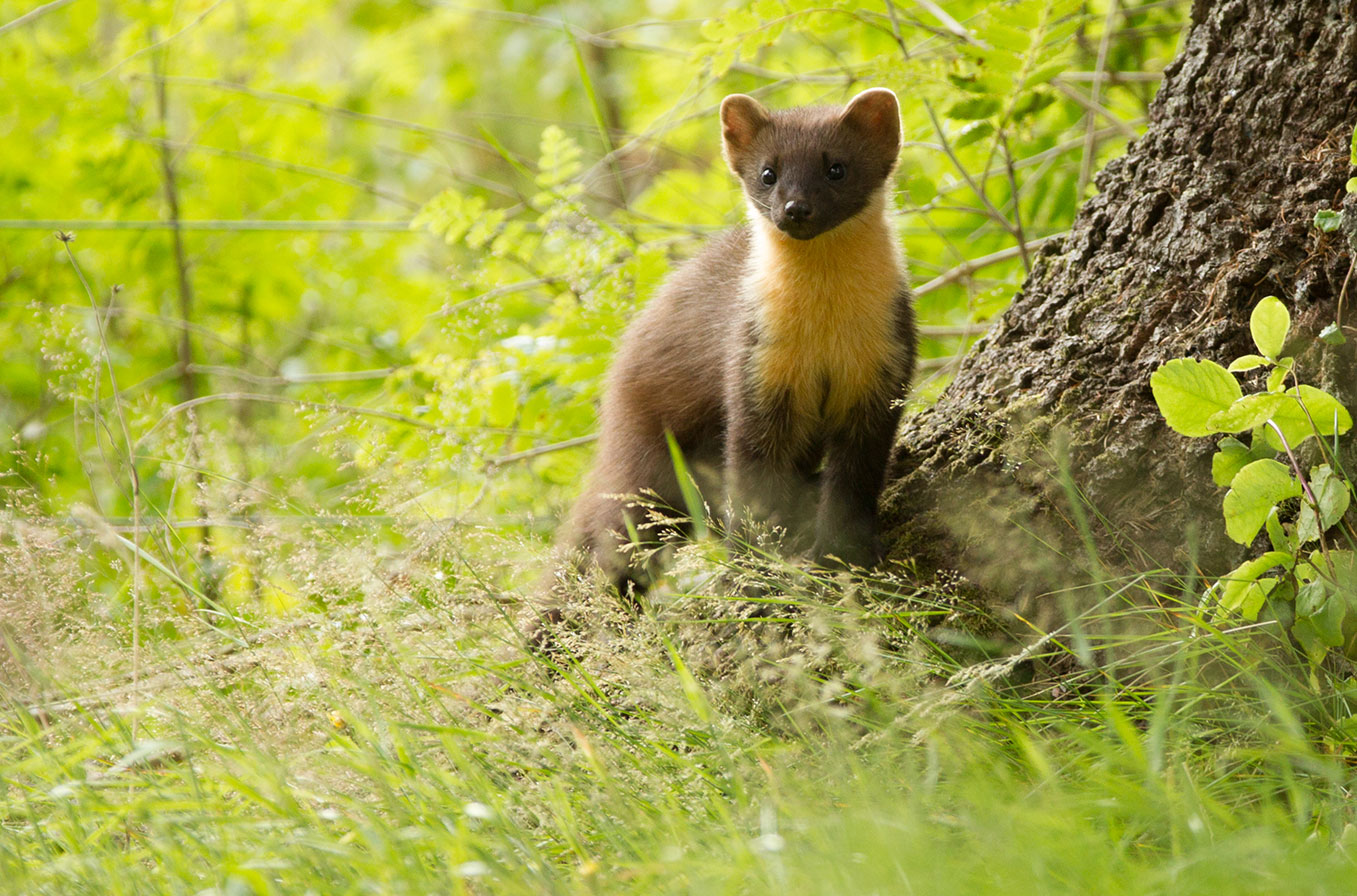 my first glimpse of a marten in daylight

Pine marten are much bigger than their cousins the weasel and stoat, marginally larger than mink and polecat but well off the size of an otter or badger. Larger males are around the size of an average cat, females a bit smaller. They have rich chocolate fur with a creamy yellow bib. In the winter their fur is longer and can have pale patches particularly as they moult into the shorter summer pelt. 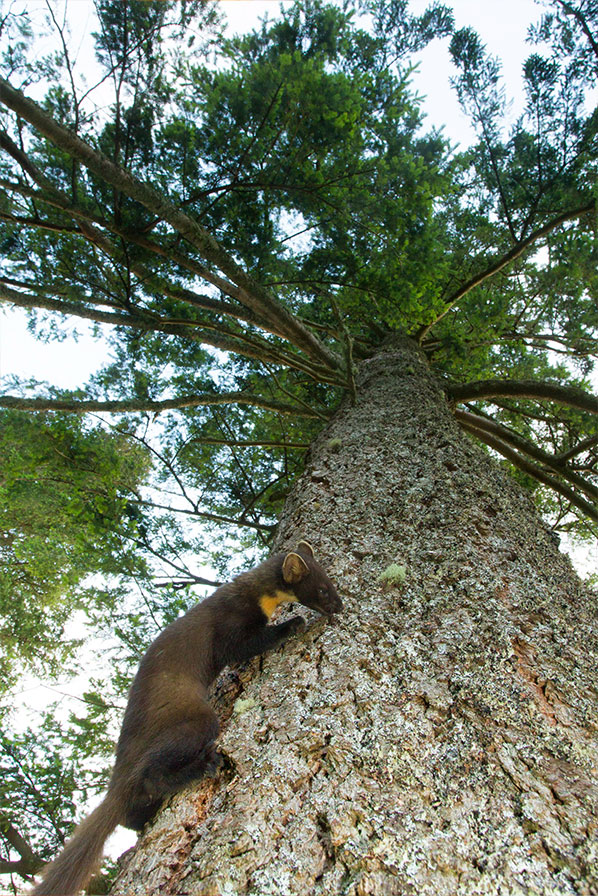 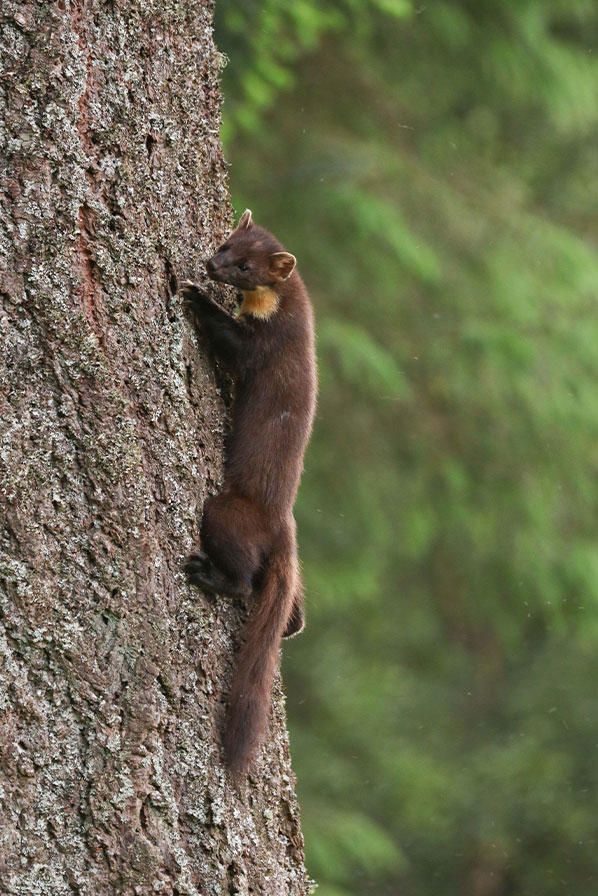 Compared to other mustelids they have long legs and this allows them to be more arboreal using trees to hunt for birds and squirrels or to seek cover from foxes which are their main predator.

Primarily nocturnal, martens will emerge before dusk and sometimes around dawn especially in the summer months when the nights are shorter and kits place more demands on foraging adults. Females usually give birth to 3-5 kits in the spring having delayed conception from the previous year. Males do not help raise the young but will defend the territory against other males who otherwise might kill their offspring. Young will remain with their mother for only a few months before being driven out of her territory to fend for themselves. Like many predators most kits will not survive through their first winter, those that do though can live on to 10 years or more. 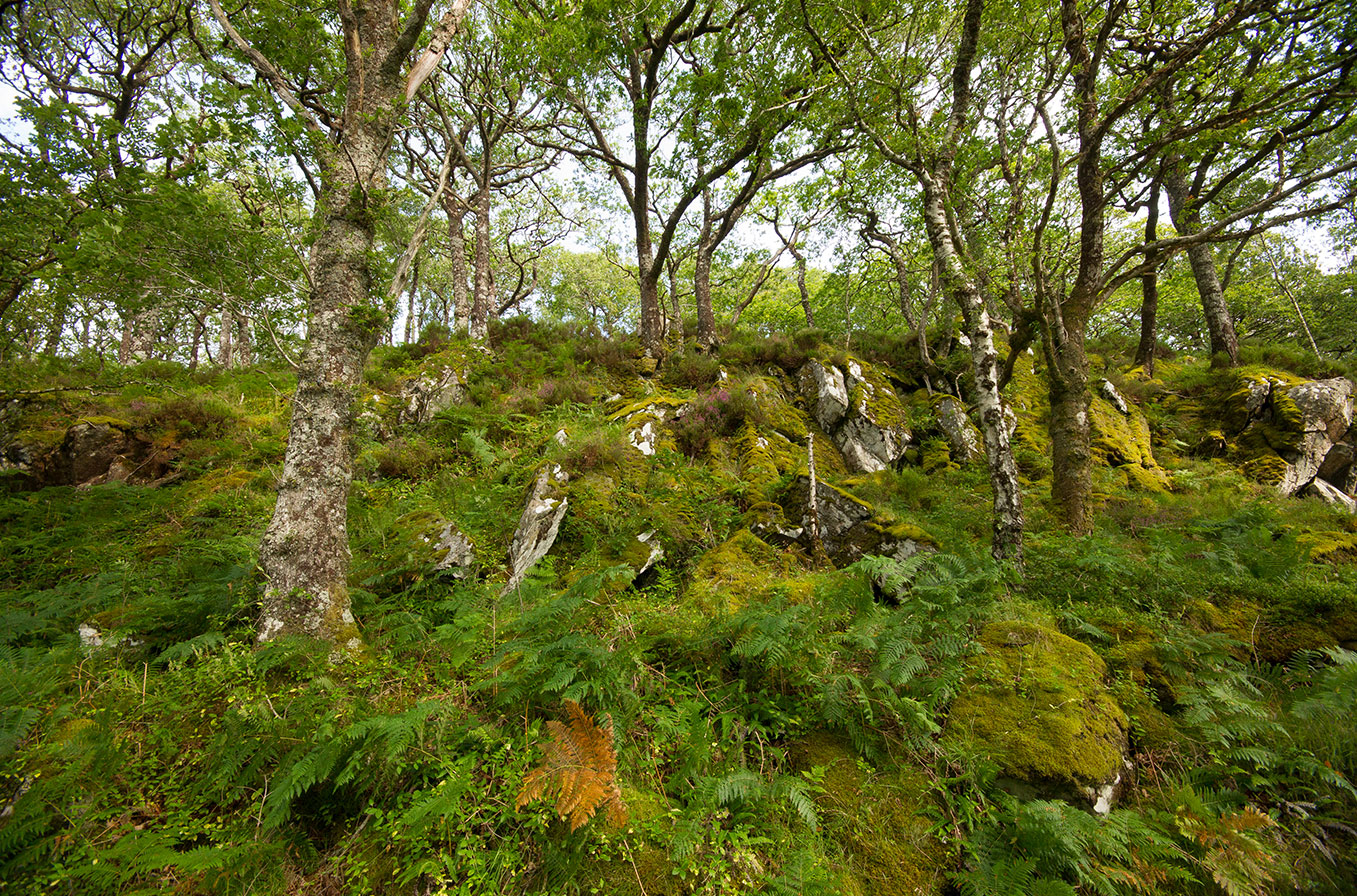 Rich habitat like this provide martens with ample prey, security and denning sites.

Pine martens are one of the most adaptable predators in Britain, equally happy to gorge on fruit and insects as well as hunting large prey such as squirrels and pigeons. Their diet also includes a myriad of other things such as frogs, fungi, eggs and carrion usually taking whatever is common in the habitat. Above all their main prey is typically rodents such as voles and mice but they will switch to amphibians and raid birds nests in the spring. During the summer they will sometimes consume large numbers of berries such as bilberry giving them sweet smelling poo. For this reason they were sometimes known as sweet mart as opposed to the polecat who was the foul mart after its rather unpleasant odour. 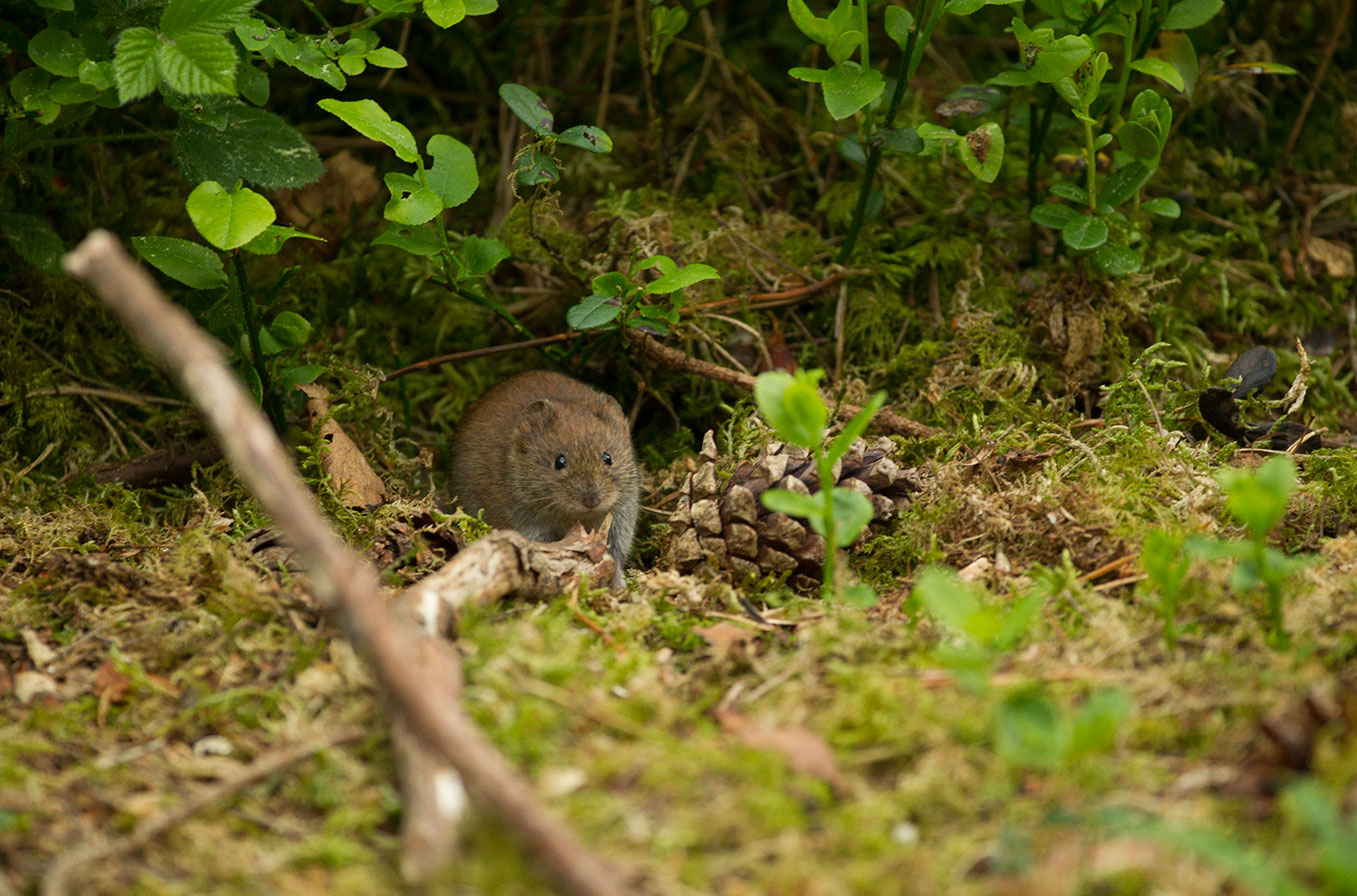 On the west coast of Scotland voles are the favoured prey.

Once common across all the UK, Pine martens suffered the same fate as many of our predators and birds of prey, they were directly targeted by gamekeepers and also lost habitat to deforestation. Driven to near extinction they were only found in the Scottish Highlands and perhaps small numbers elsewhere. Better protection though and changing attitudes towards our key predatory species saw their numbers rise and they have expanded across much of Scotland and into northern England. This recovery has also been mirrored in Ireland where Pine martens are thought to have benefited red squirrels by driving out the non native greys. 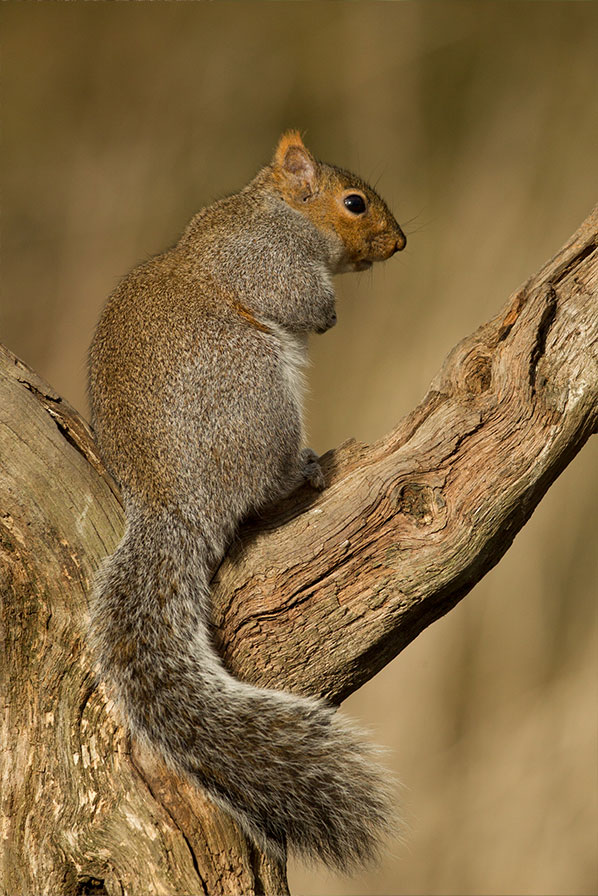 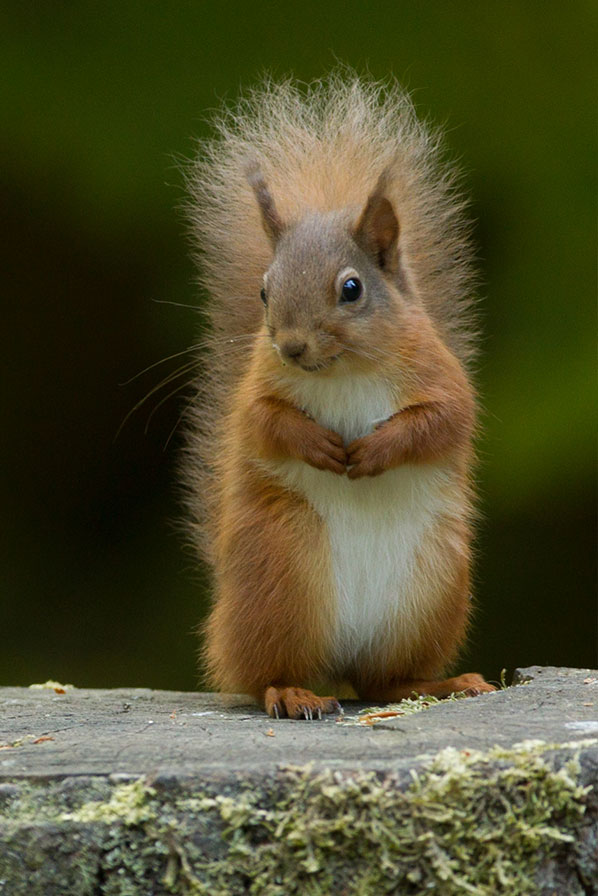 In areas where pine martens are returning grey squirrel numbers are falling whilst reds are thriving. 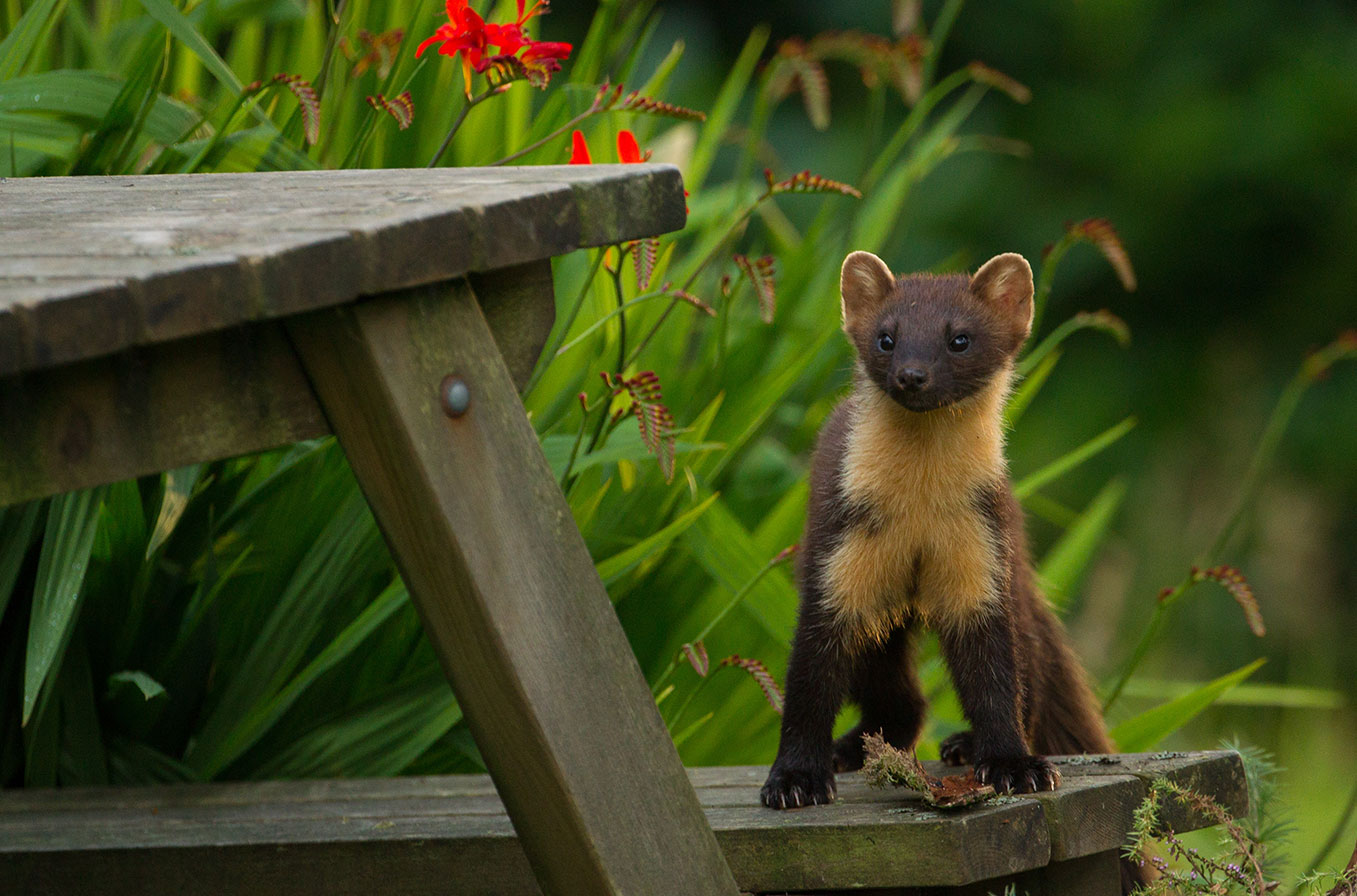 Martens are now become regular visitors to gardens including even on the outskirts of Edinburgh and Glasgow.

In 2015 the Vincent Wildlife Trust began translocating martens from the newly recovered Scottish populations into Wales. This was heralded a success and breeding and population expansion has been noted since. In 2019 Gloucestershire Wildlife Trust released martens into the Forest of Dean and River Wye Valley on the English border. It is hoped that these two populations will join up and also expand further into England. Sightings from the New Forest and other locations in England suggest that some unofficial introductions may also have occurred and being so versatile it is likely that Pine Martens will be successful in expanding into suitable woodlands.

It seems then that these exciting and enigmatic animals are back for good and a 12 hour stint in an uncomfortable one man hide may not be required anymore. If you want to see a fox up a tree though I know just the place!