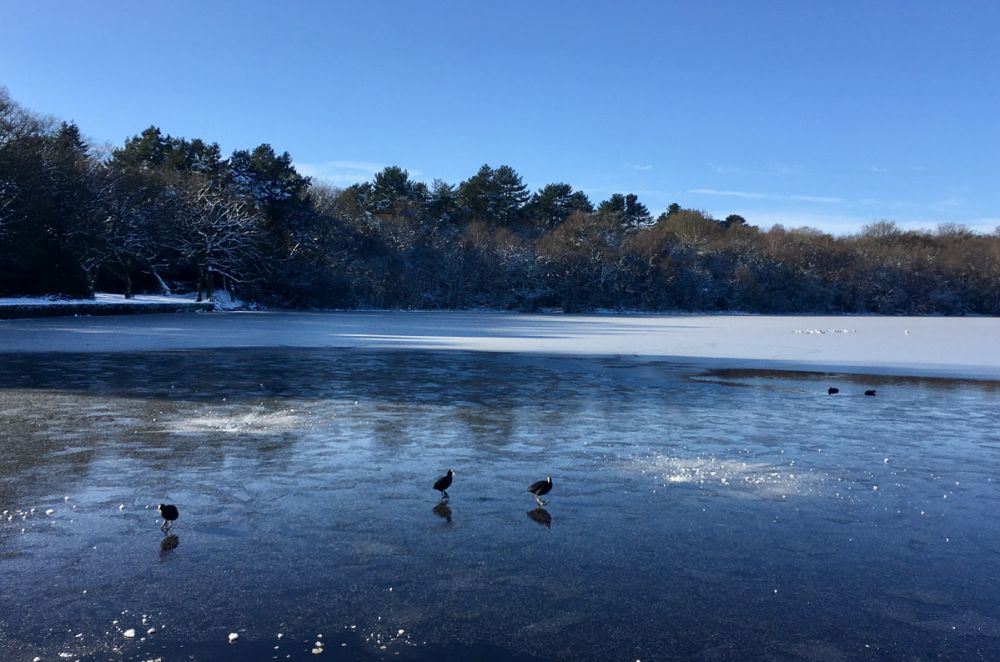 Lee Copplestone rediscovered his love of nature through being furloughed but as time has gone on, has the novelty of lockdown worn off?..

Fast forward almost a year since the first lockdown in March 2020 and we face a very different landscape. In my local park, the ground is frozen hard, unforgiving as the Tarmac paths I try to avoid. The muddy tracks are three times wider, trampled by increasing numbers of visitors in their Wellies and walking boots. New “desire lines” have appeared on the ground as well as on my face; I long for a pint in a pub followed by a curry in a restaurant. Now, everyone and their dog visits “my” park. It’s become a sea of Bobble hats, scarves, down jackets and fur. Though I welcome the huge diversity of new people enjoying this beautiful green space, I do wish they would leave it all to me sometime soon! 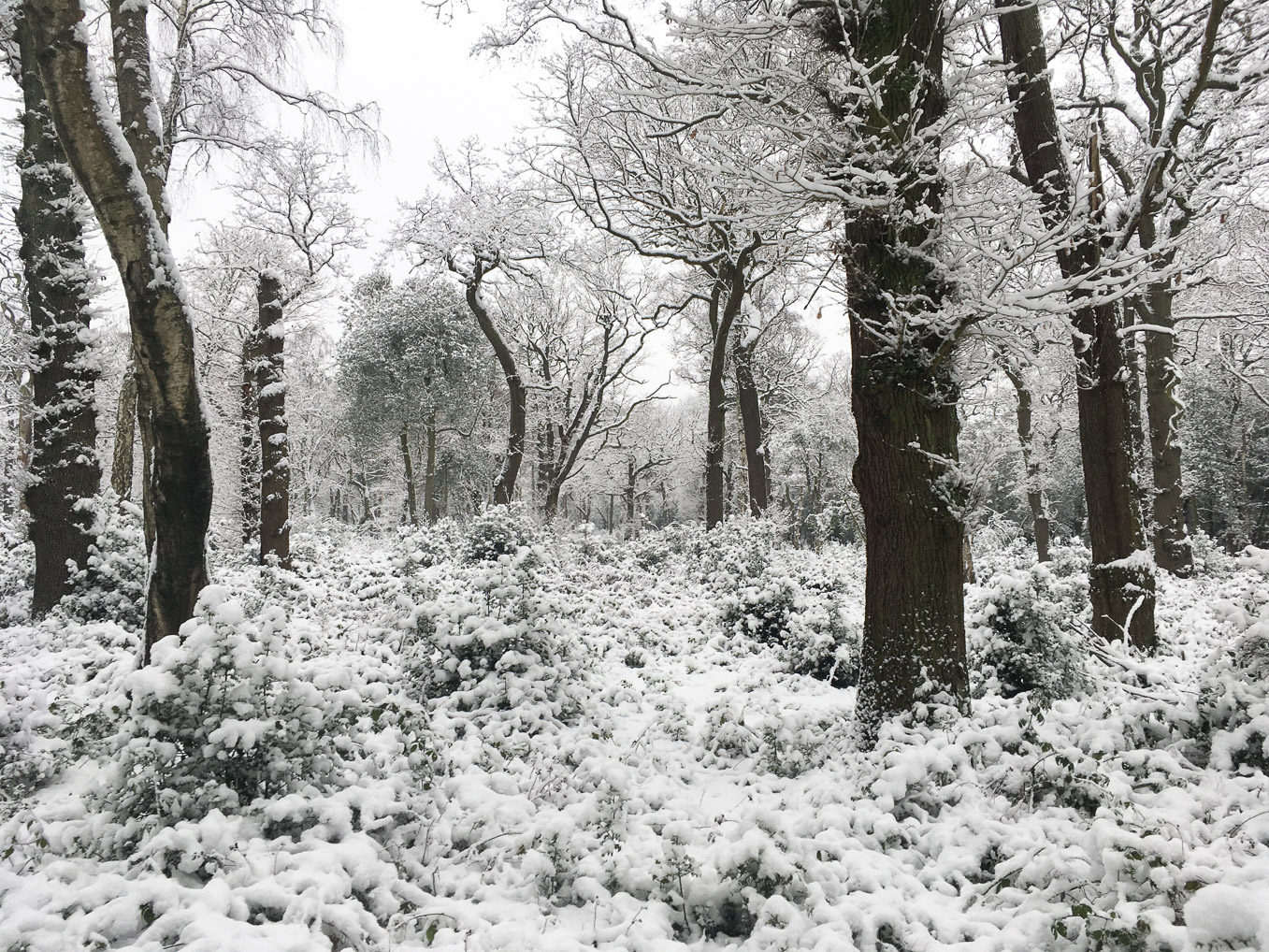 Thick snow in the woodlands

I press on, knee-deep in the face-masks and single-use coffee cups littering the site. Ahead of me, a family walking at zombie-pace are taking up the whole width of the path so I jink left along a narrow woodland track to avoid them where I soon stumble across a young couple lying on a blanket on the icy ground. They seem keen. It’s two degrees Celsius with a wind-chill of minus six, not ideal for alfresco affairs. Rather than pass by them with a cheery greeting, I do the British thing and retrace my steps in embarrassed silence. Then I remember the date: February 14th 2021 and their behaviour starts to make some kind of sense. Another lockdown drama unfolds. 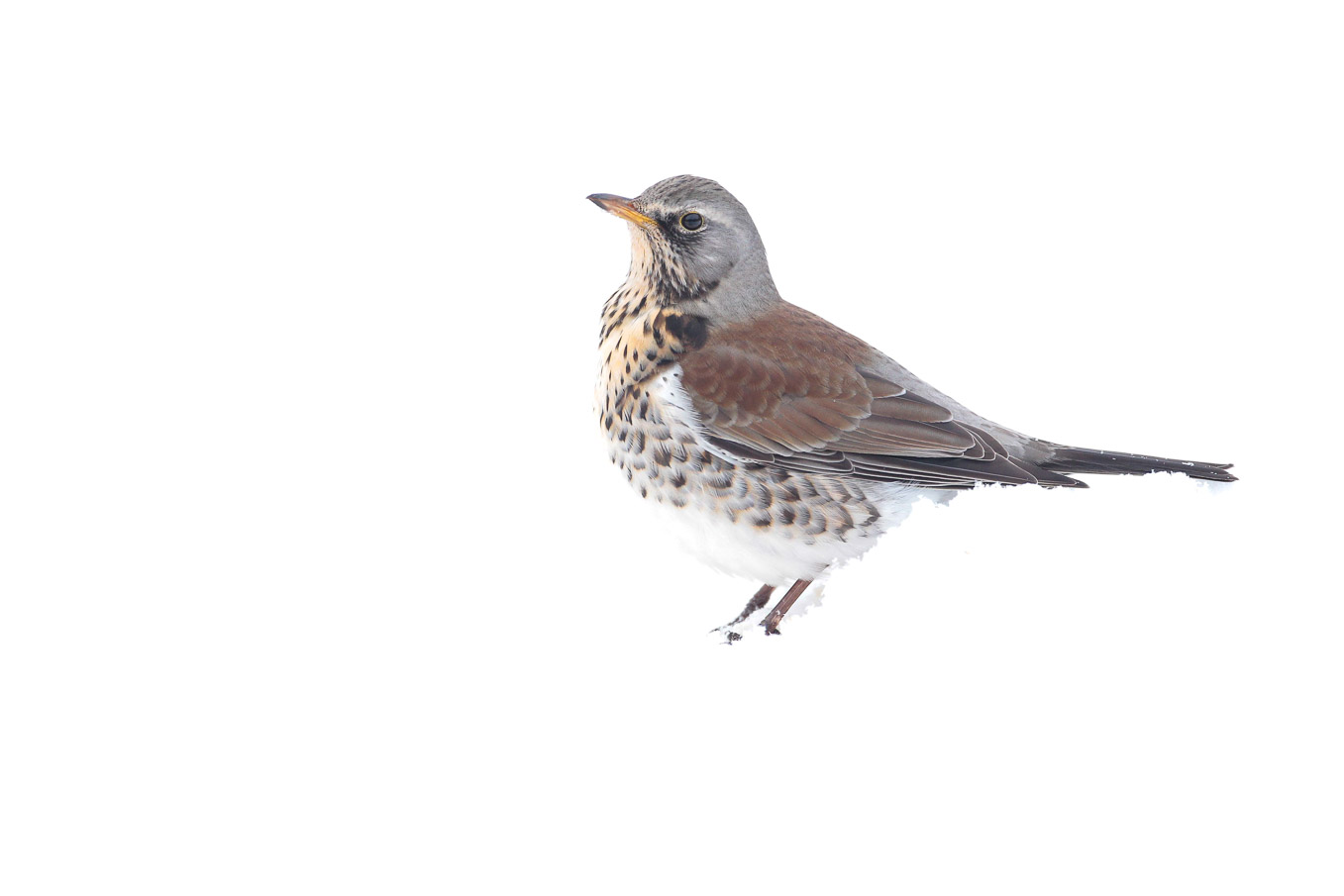 a fieldfare in deep snow

Flocks of Redwings and Fieldfares have replaced Willow Warblers and Chiffchaffs. The much photographed Red-backed shrike that dropped in to the heathland for a few blistering spring days is long gone. The seasons always take us by surprise; when it’s winter we can’t imagine it was ever summer and vice versa. You’d think we would be used to this idea by now.

A pair of Bramblings feeding under the shelter of a small fruit tree pretend to be Chaffinches almost escaping undetected in the poor light until I focus my binoculars on them to check their plumage. Silhouetted against the snow their dark heads appear characteristically sharply peaked. 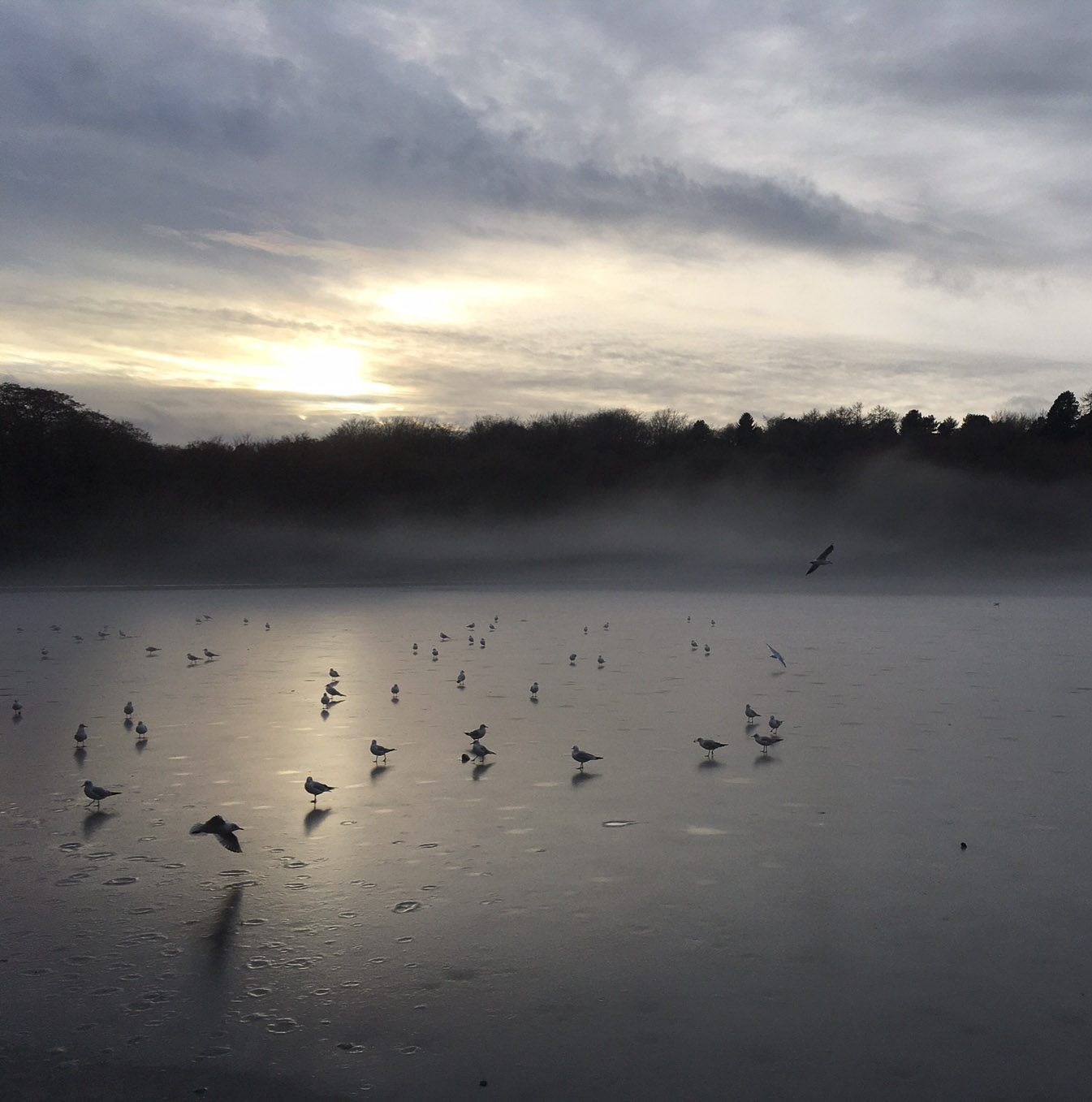 black-headed gulls on the ice

In the valley, a male and female Stonechat perch on the gorse tops swaying in the bitter breeze. One spring, several years ago, Dartford Warblers took up residence in this area where they often hung out with their less wary Stonechat neighbours. In contrast the Dartfords would skulk lowdown in the vegetation only popping up to sing from a perch for a few beautiful but frustrating seconds. They may not be great singers but they are visually stunning if you are lucky enough to catch a glimpse of one close-up. Pity the photographer trying to capture these birds on film. Sadly, the Dartford Warblers have not returned to this heathland following a similar cold snap. As many species creep further north spurred on by climate change, the Dartford Warbler’s hold on new territory is tenuous. There’s a clue in their name and despite rising temperatures it’s still cold up north. 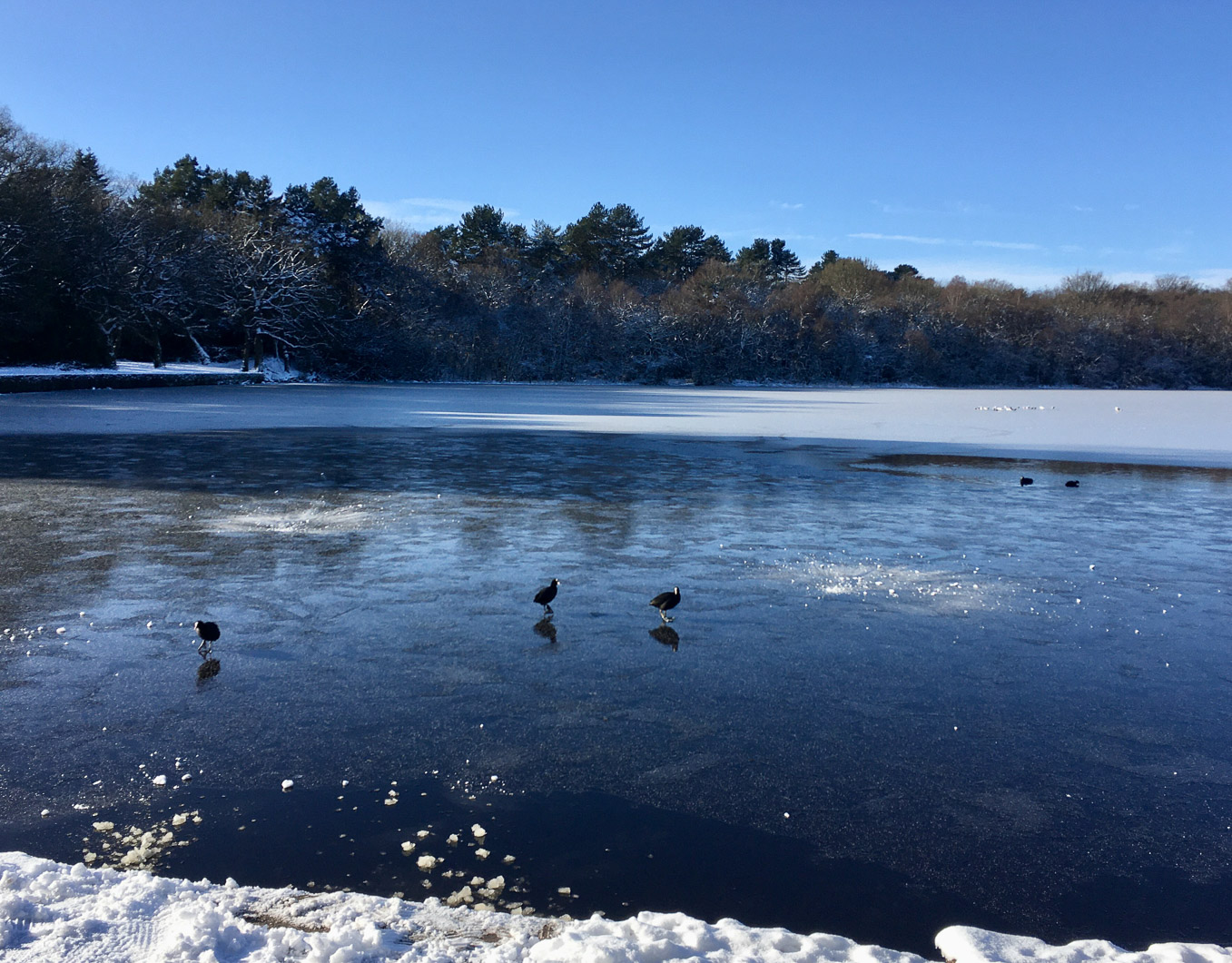 coot stand on the frozen lake

I pick up pace to keep warm. Two Rose-ringed Parakeets bubble and squeak high over the woods where large flocks of Wood Pigeons feed on unfeasibly thin branches then all at once scramble skywards in a clatter of wingbeats. Their reason soon becomes apparent. Suddenly, “a Sparrowhawk leaves the woods in high dudgeon” to quote Eric Simms. His BBC Sound Guide to Birds was the first audio guide I listened to and I remember thinking that “high dudgeon” was a place name like High Wycombe or High Worsall. Later I learned this was an archaic descriptive term meaning “a feeling of intense indignation”. Eric Simms was an important early innovator in wildlife sound recording who paved the way for later generations of audiophiles. His clipped tones and old fashioned use of language belied his love of cutting-edge tech of the day and his determination to push the envelope of field recordings.

a sparrowhawk soars in the blue sky

Walkers amble gleefully across the empty golf course like kids treading in wet concrete. Crows, Magpies and Robins are everywhere. A Grey Squirrel carries a mouthful of nesting material up into a hole in a rotten tree. Around the pool edges where broken ice lies in shattered sheets it resembles a lorry load of heavy glass panels that didn’t make it to the building site in one piece. The frozen lakes host ice-skating Coots and where the water is free-flowing, Mallards and Mute Swans feed alongside a pair of Goosanders, the male’s luminous Magnolia feathers glow against the silver-grey water. All our birds will struggle to find food while the Beast from the East holds us in its icy grip. 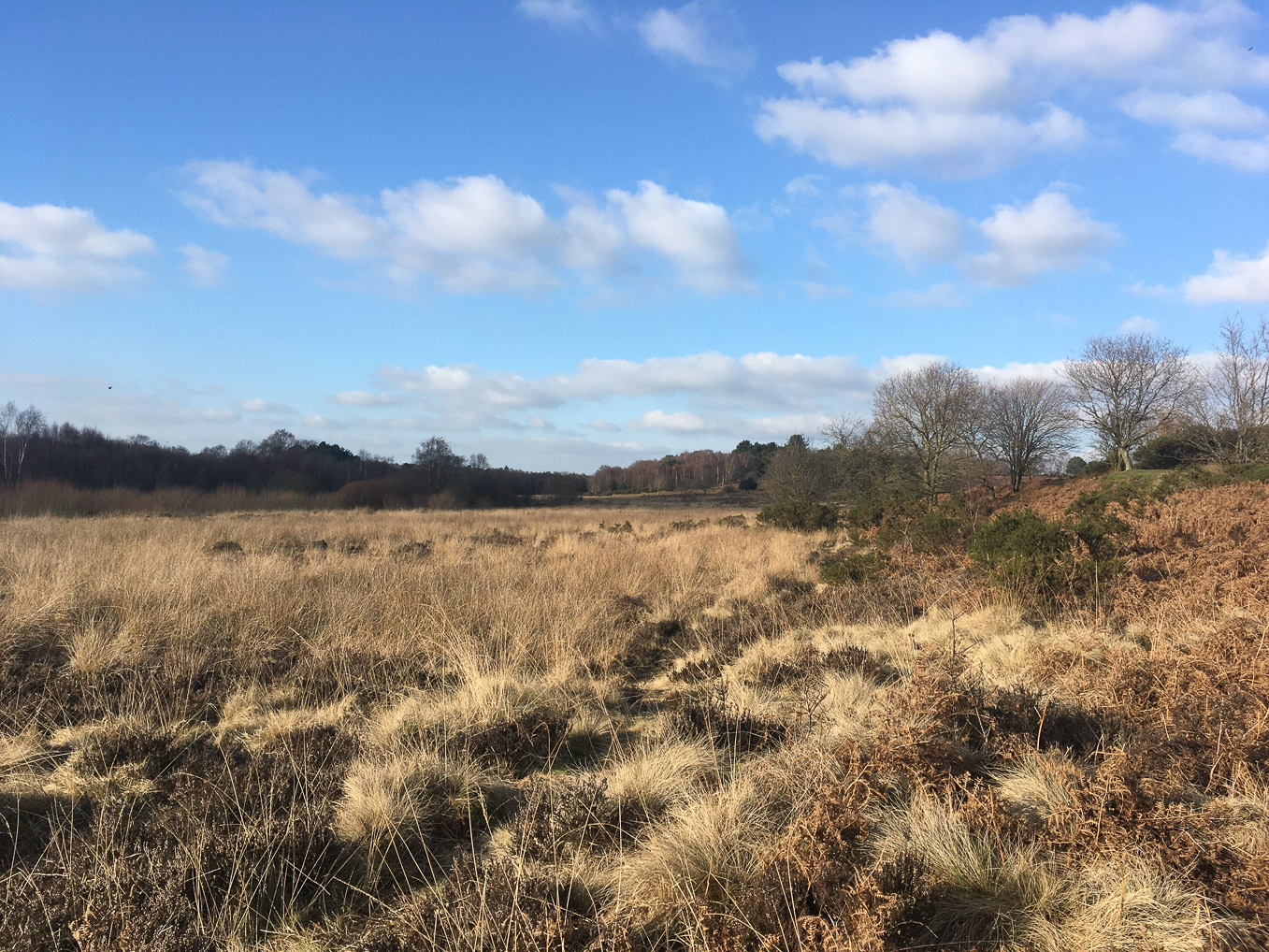 Longmoor valley after the snow

Two days later, the temperature soars into double figures and the snow quickly disappears. There’s a feeling of optimism in the air, millions are vaccinated, a plucky Great Tit blasts out its two-note call, at last spring is on its way. Here we go again.

Lee Copplestone has enjoyed a long career in conservation previously working for the RSPB and now for Keep Britain Tidy.