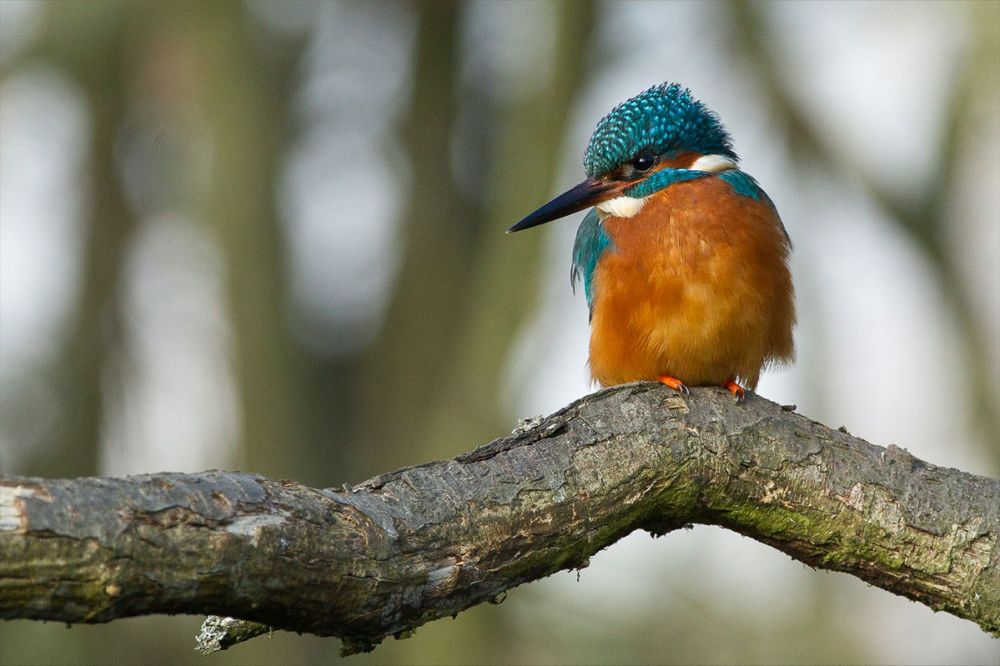 All about kingfishers and how to see them

"Kingfisher" the shout would go out across the busy office and cue work stopping and a rush to the windows. This was the daily occurrence when one of these iconic little birds decided to start fishing outside. The office, in outbuildings of a country house overlooked a moat and several times a day a high pitched whistle and a flash of blue would announce the arrival of our local celebrity.

No matter how often you might see one, the novelty of seeing a kingfisher never wains. But so many people don't see them often or sometimes never see one. They are a small bird and despite their colours can be quite inconspicuous. They are also shy and easily spooked into flight. So how can we up our chances from 'slim to none' to 'good to excellent'? 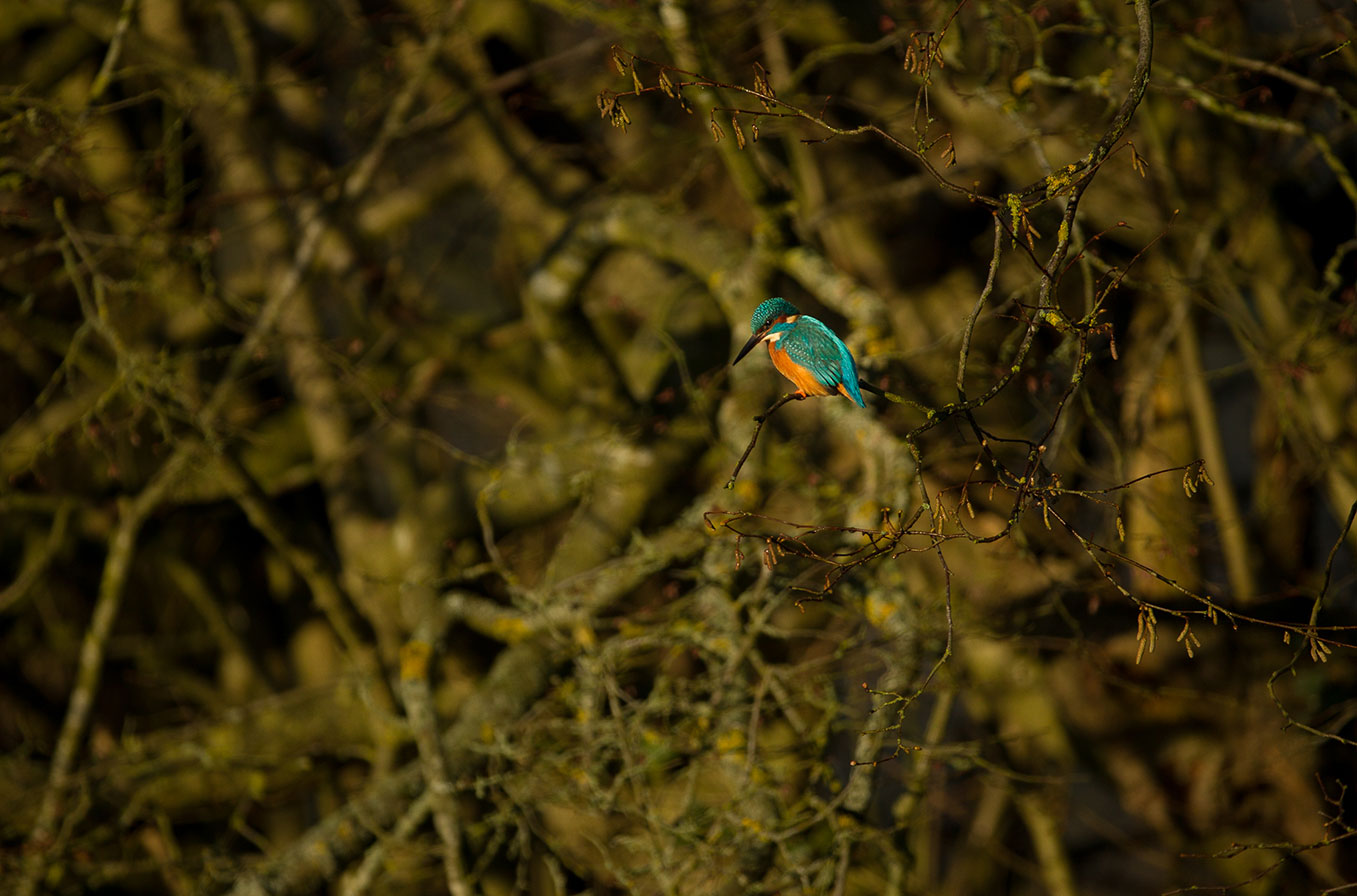 Despite the bright colours kingfishers are often overlooked as they hide away in riverside branches.

One of a kind 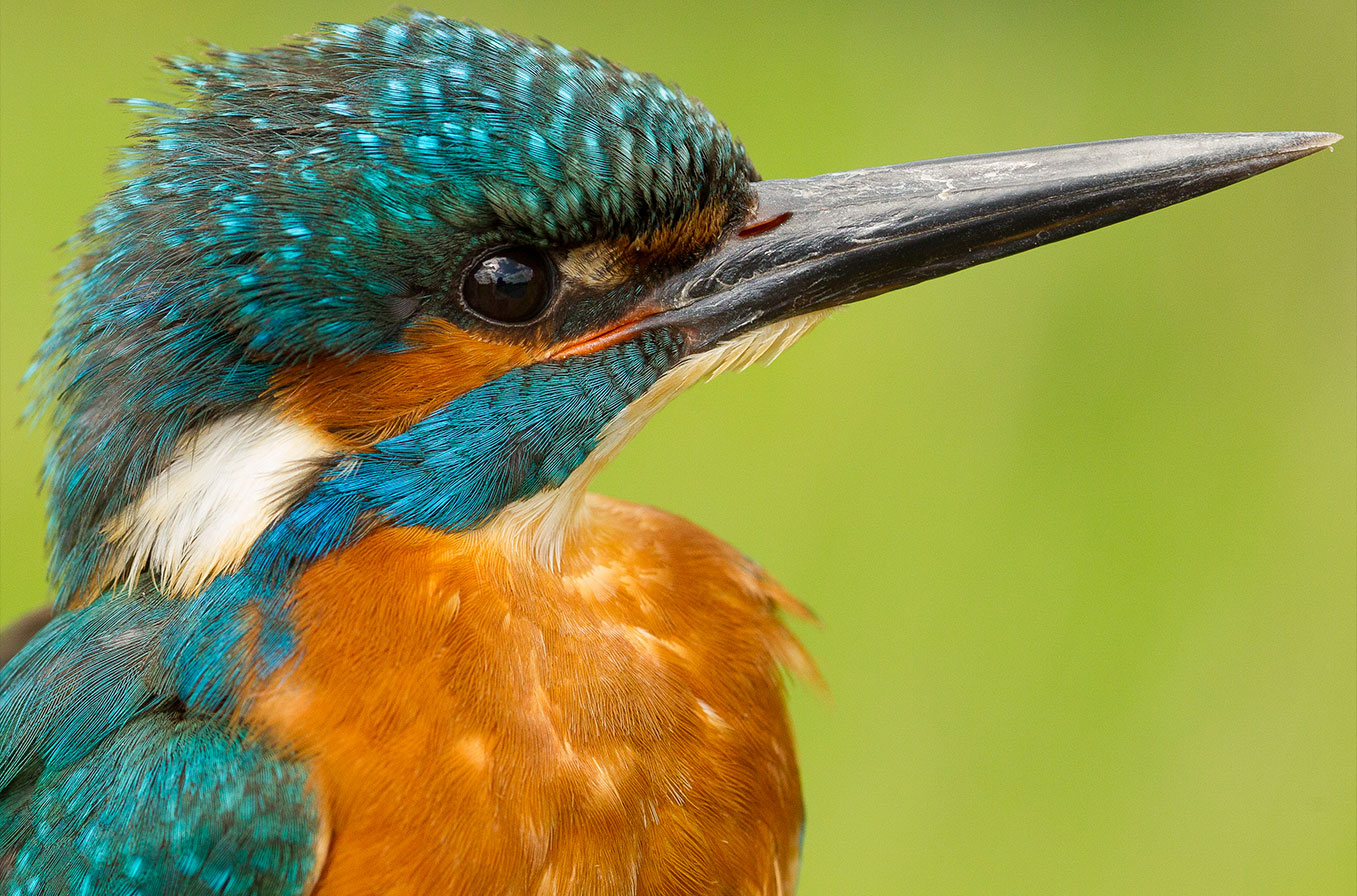 We have a single species of UK kingfisher though they are one of over a hundred in the family worldwide. The most famous and largest being the Australian Kookaburra. The common kingfisher we see is distinctive amongst birds with the most remarkable colours of bright blues, greens and orange. Male birds have completely black bills whilst females show orange on the lower mandible. Young birds tend to be less vivid in colour and with dark legs. 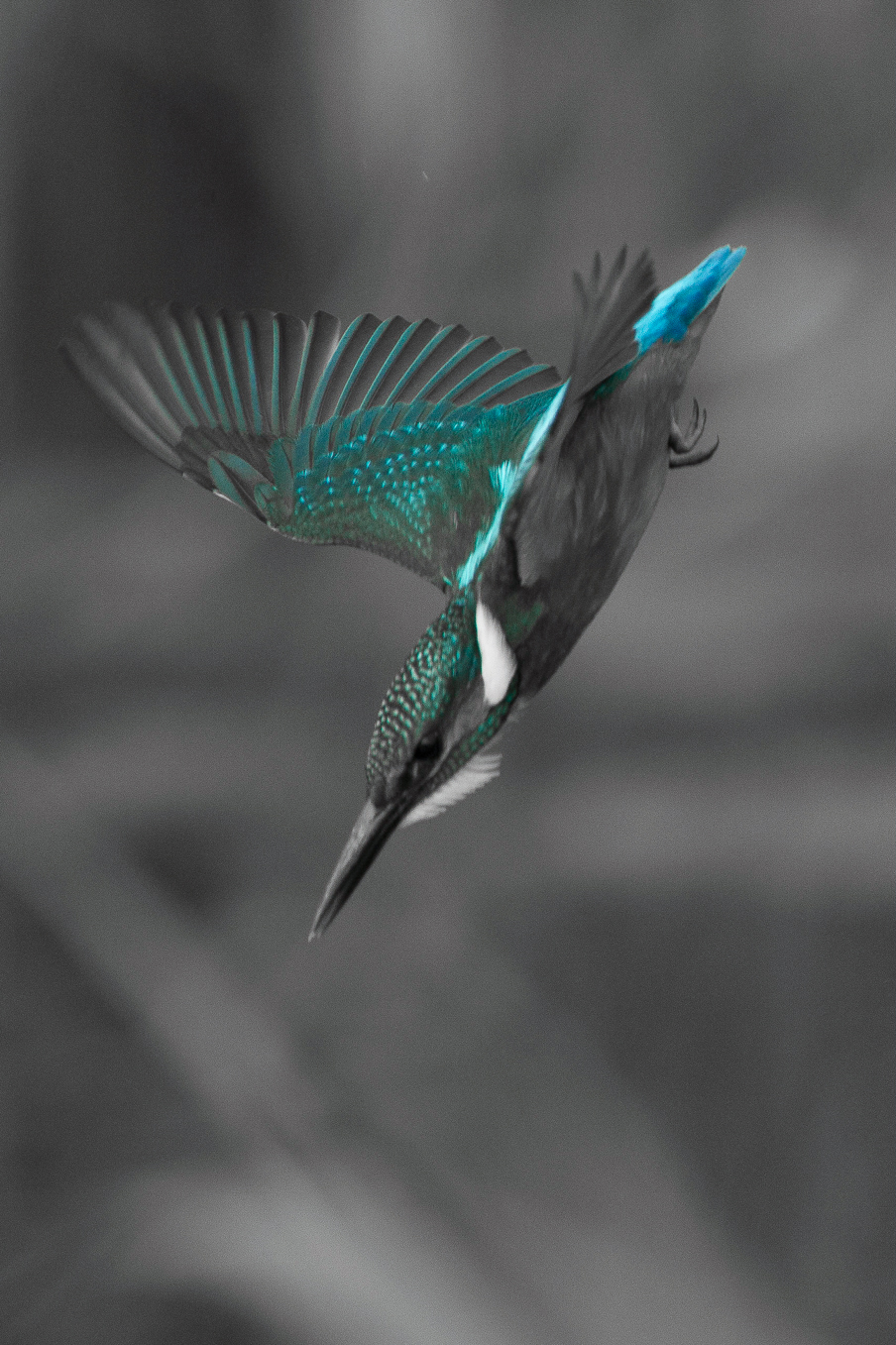 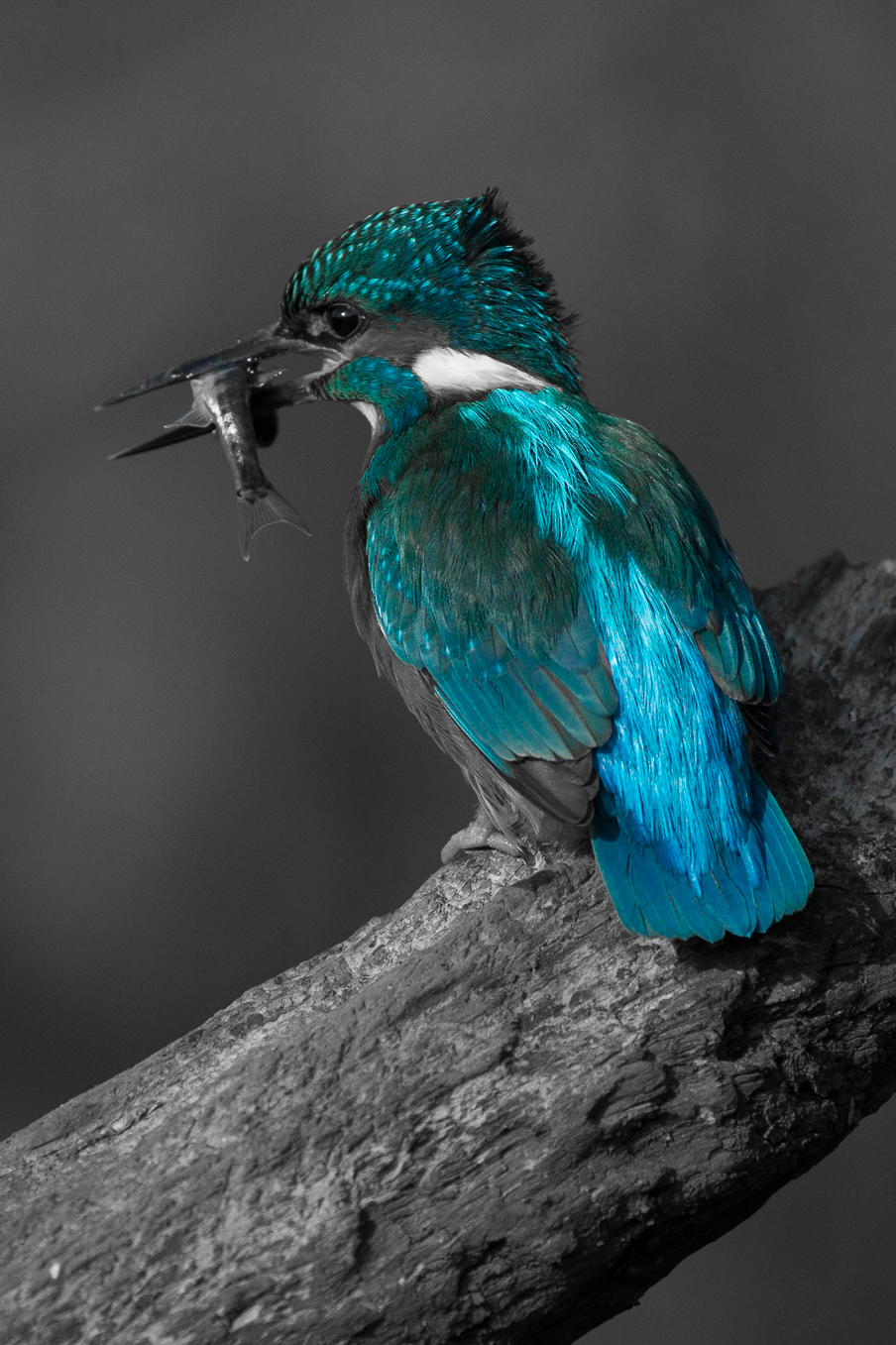 The iridescent colours on the head and back feathers are caused by refracted light and not pigment meaning that sometimes they can appear green and other times blue!

Kingfishers are diminutive birds about the size of a robin though with a large head and bill they weigh almost twice as much. Dense water resistant plumage and powerful wing muscles enable them to dive and emerge from water with prey. Most young kingfishers do not survive their first winter but adults can live to 7 years old in favourable conditions.

Where to find them

Kingfishers are widespread, residing in almost any water body where there is prey. Commonly using rivers, canals and lakes, Kingfishers will also visit small brooks and I’ve even seen one at my garden pond. Diet ranges from fish to aquatic invertebrates, newts, tadpoles and even froglets. Anywhere there is a healthy water body with life in it a kingfisher is likely to check it out. 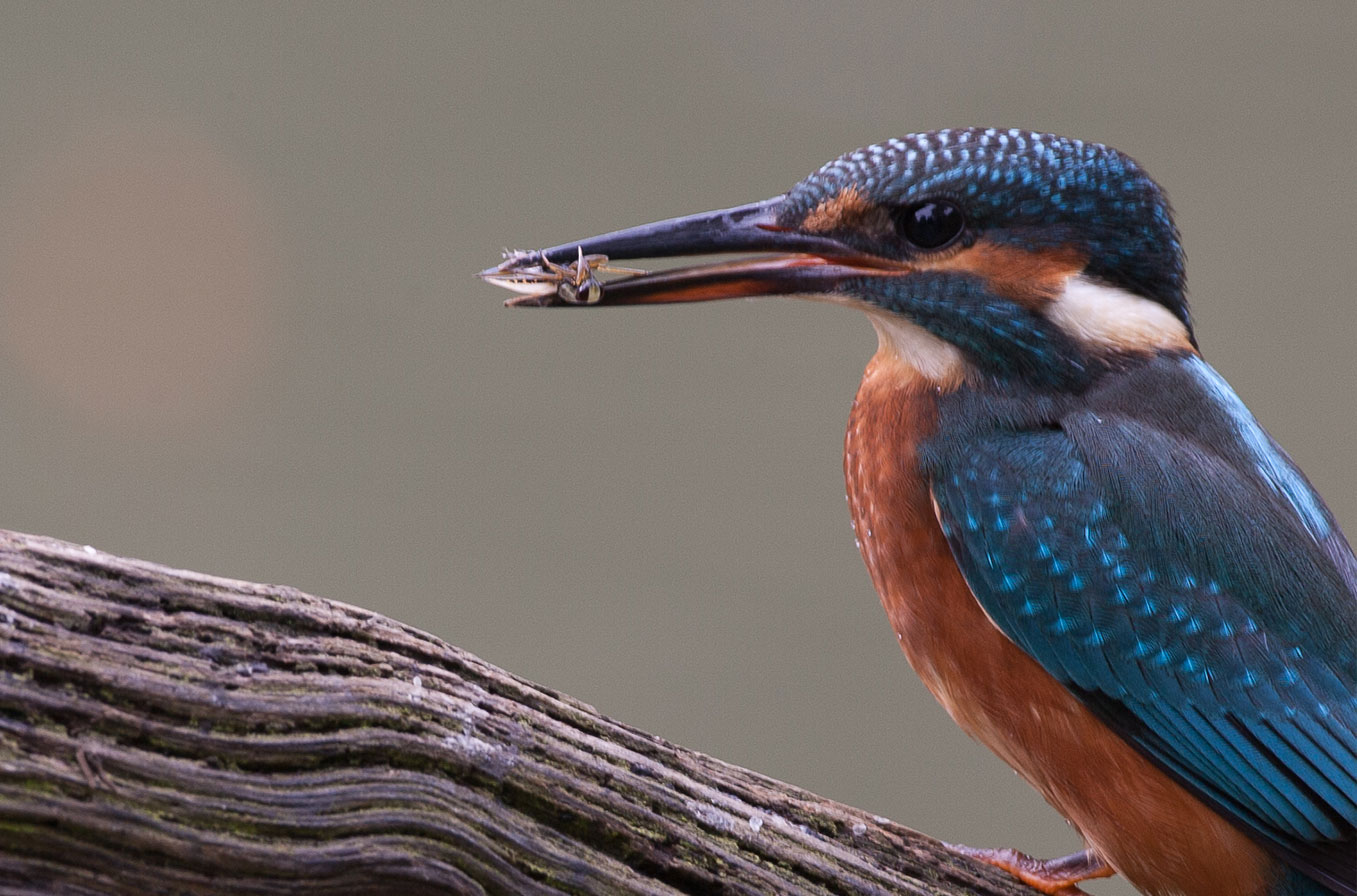 Kingfishers will take a variety of prey including invertebrates such as this water boatman.

I see most kingfishers on my local canals and rivers where the linear nature of the habitat means that you have every chance of crossing paths with the resident bird.

Territories will be up to a couple of miles of river plus any lakes or pools nearby and kingfishers move regularly around looking for the most productive fishing spot. They will sometimes cut corners or avoid boats etc with a fast high flight but for the most part kingfishers will fly low and straight hugging the river or canal side.

Favourite areas where the birds will spend most of their time is where meanders or backwaters create shallow slow water. These are places where fish can easily be seen and hunted. Watching from overhanging branches is the preferred fishing technique but surprisingly slender stems may be used. If the prospects are good the kingfisher will even hover for a short period, hanging about three feet above the surface. 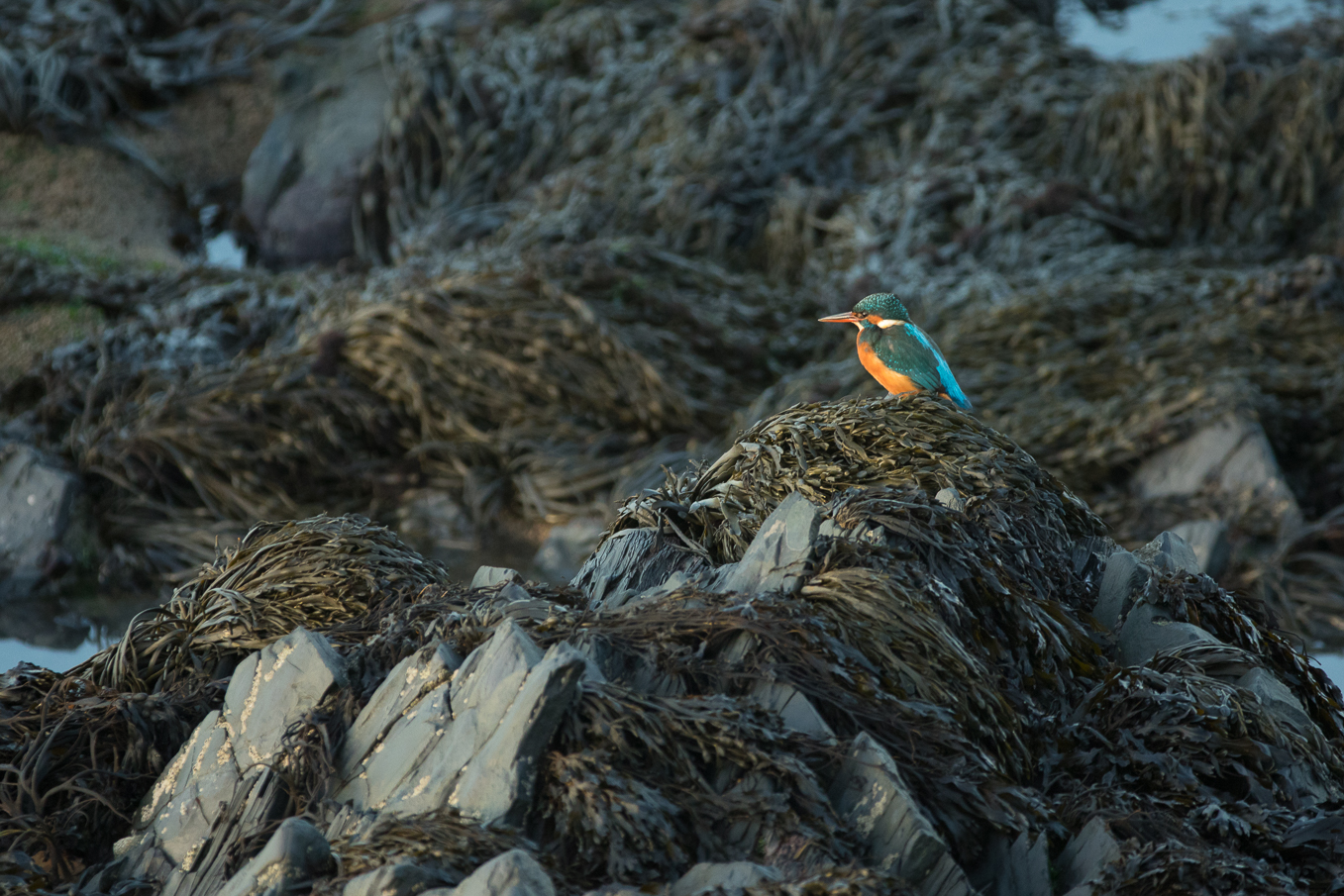 in the winter some kingfishers move to the coast where they can hunt fish and shrimps in rock pools.


When to see them

Kingfishers are active all day but if a good meal is caught this can be succeeded by a couple of hours of quiet digestion or preening. Usually this is in a shady thicket and the bird can be hard to see. Like many small predators though they must eat regularly so they will be hunting again soon enough and will return to productive locations time and time again.

By far the best time is early in the morning when the birds are hungry after the night or after heavy rainfall. They are most busy during the breeding season when more hungry mouths force parents to hunt all day. Kingfishers can have up to three broods in a summer so the nesting season is long. This also means that by late summer the population of kingfishers has significantly multiplied so greatly increasing chances of sightings. 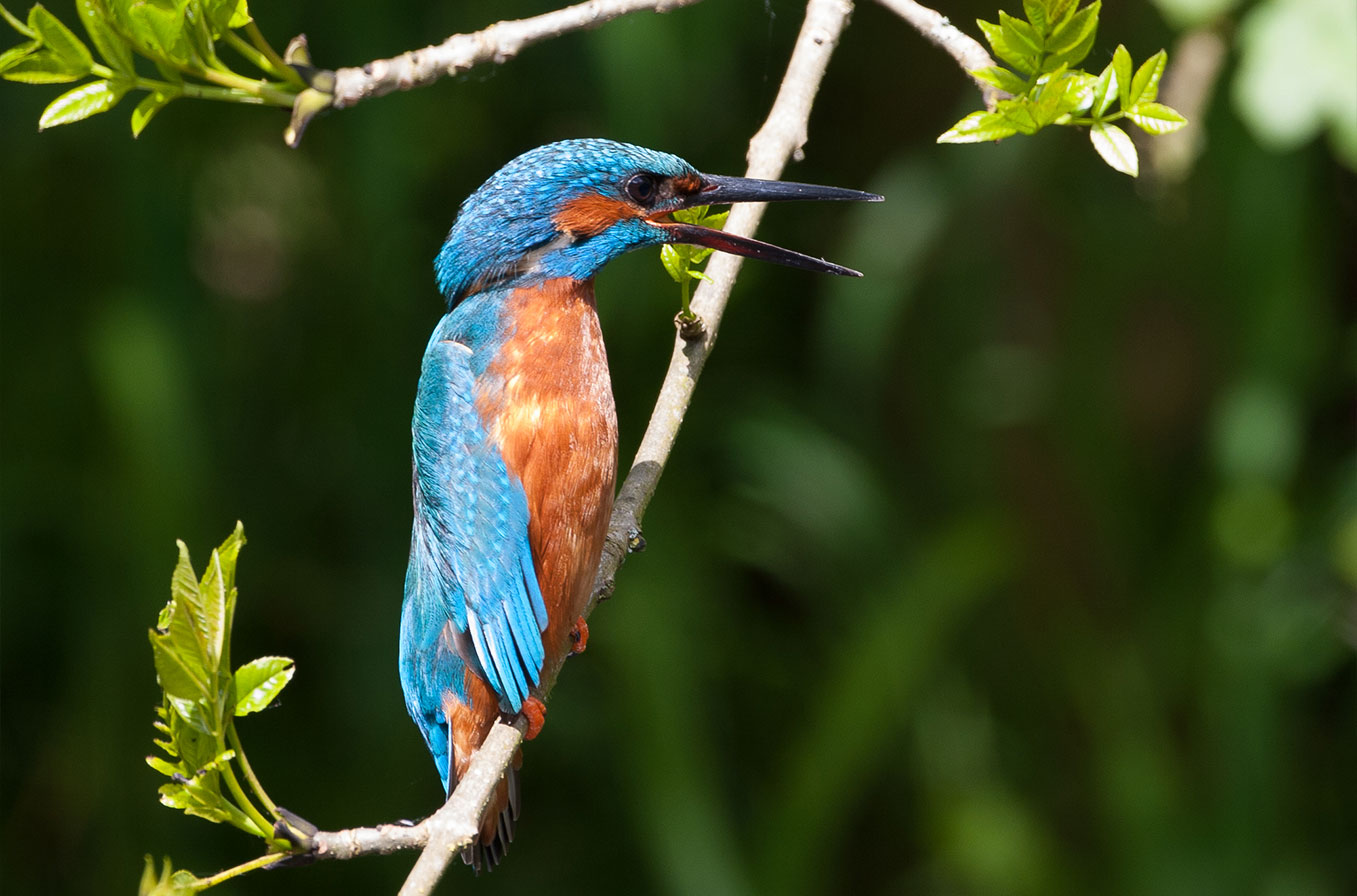 Fiercely territorial, kingfishers call frequently and will fight to defend their hunting and breeding areas areas.

Kingfishers excavate tunnels in river banks or other suitable locations such as the root plates of fallen trees. Each brood can include several chicks with exceptional clutches of ten being recorded. After only a few days out of the nest the parents become very aggressive towards their young driving them away from the territory. Most of these will not survive their first year with poor hunting technique or lack of access to suitable territory. Cold also takes a huge toll and hard winters can see many birds perish. The lucky ones migrating to the coast to fish in the un-frozen salt water. 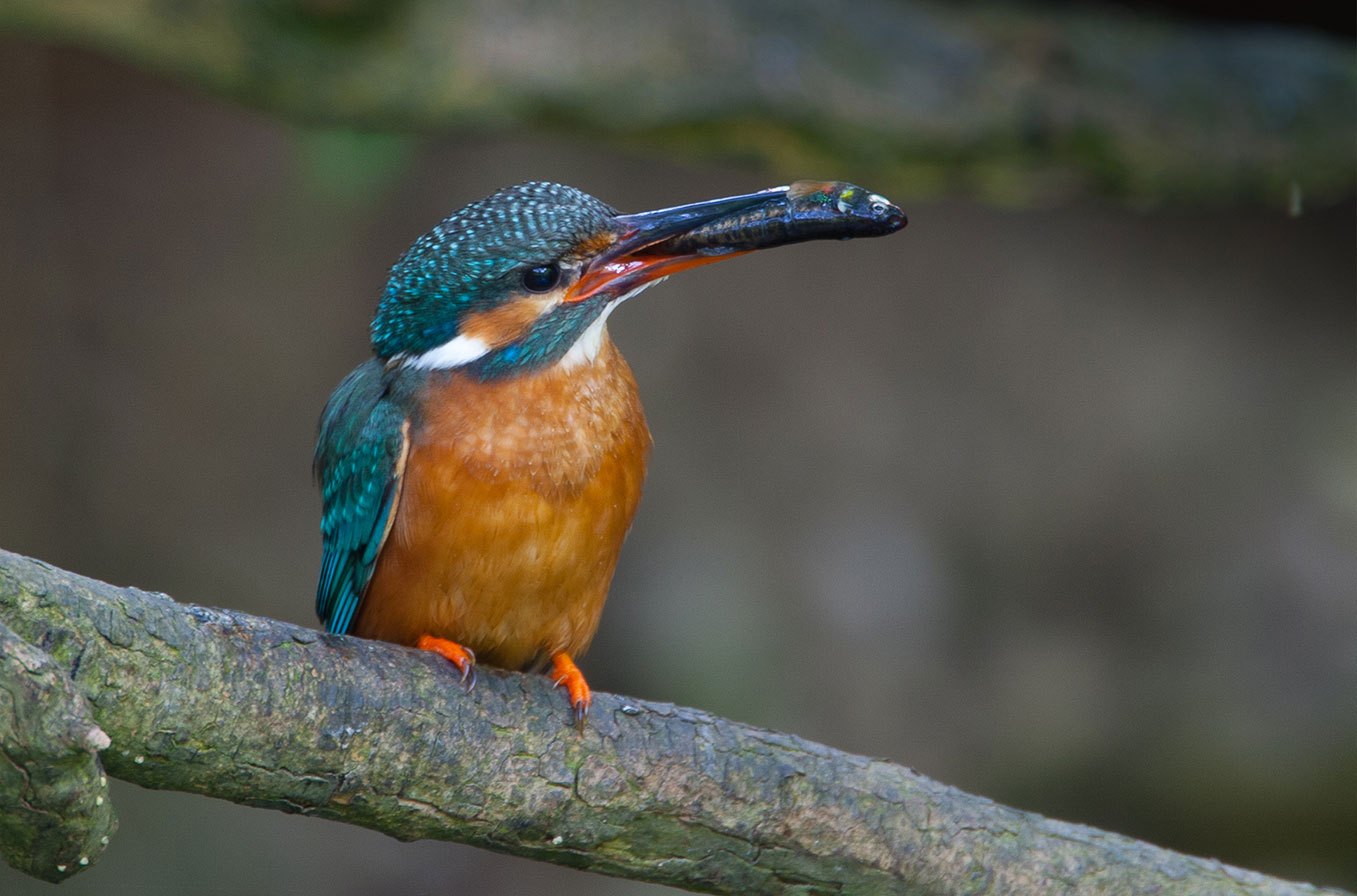 During the breeding season a pair of kingfishers may have to catch over 100 small fish every day to feed their young.

Nesting kingfishers can be easier to spot but whilst it is tempting to look for burrows and increase the chances of views it is illegal to disturb these schedule one species at or near their nest site. Better to find a likely spot and sit and wait for them to come and hunt. They are usually so focussed on hunting that they can ignore a quiet and still observer. If you don't believe me ask the thousands of fishermen who have had them land just a few feet away. 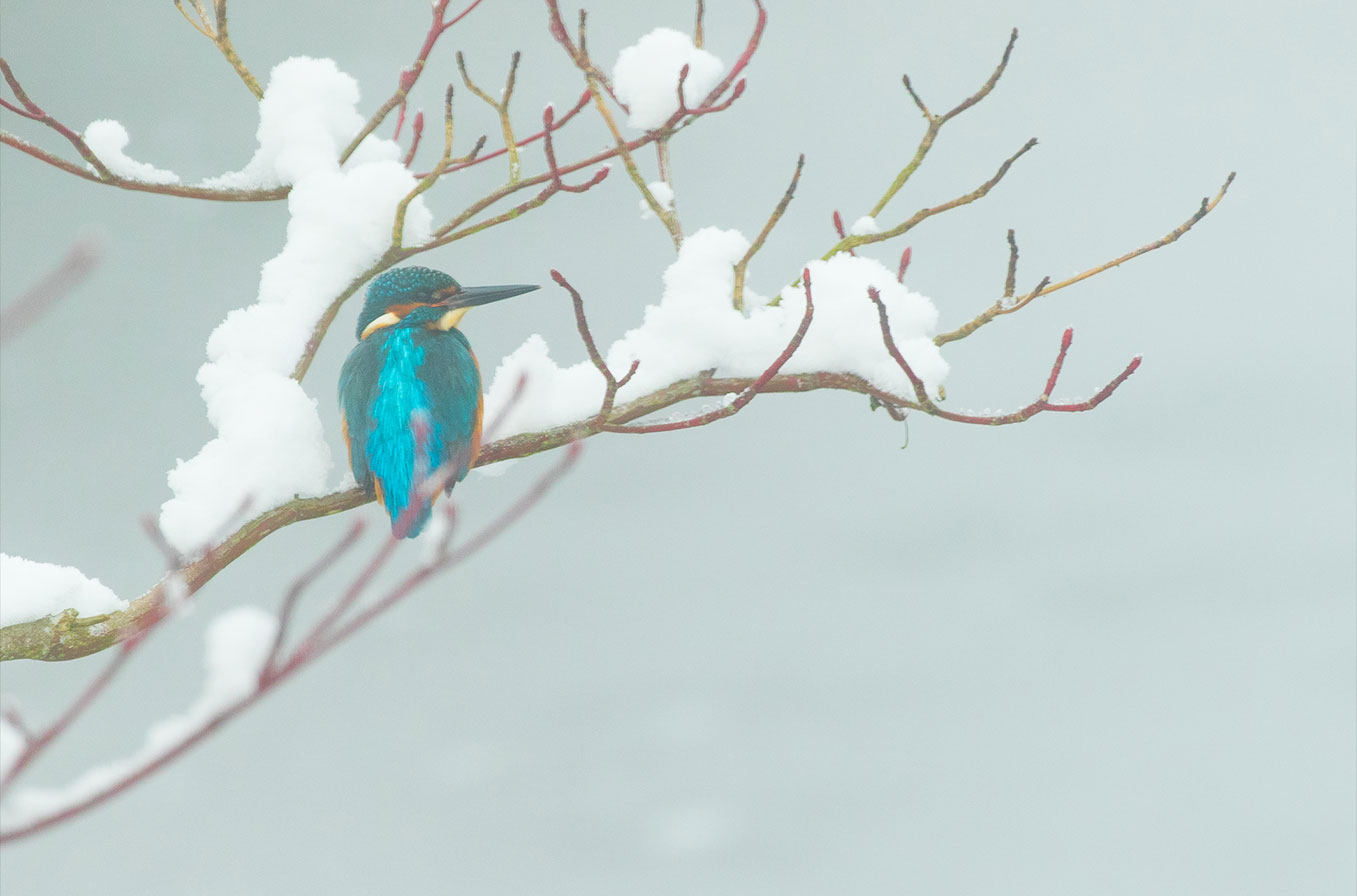 In harsh winters only one in 10 kingfishers may survive.

If there was one top tip to seeing kingfishers it is really to recognise their call and listen out for it. They are vocal little birds and their single or sometimes two note whistle is high pitched, loud and carries far. If you look quickly in the direction of that call when you hear it your chances of kingfisher views are greatly increased. 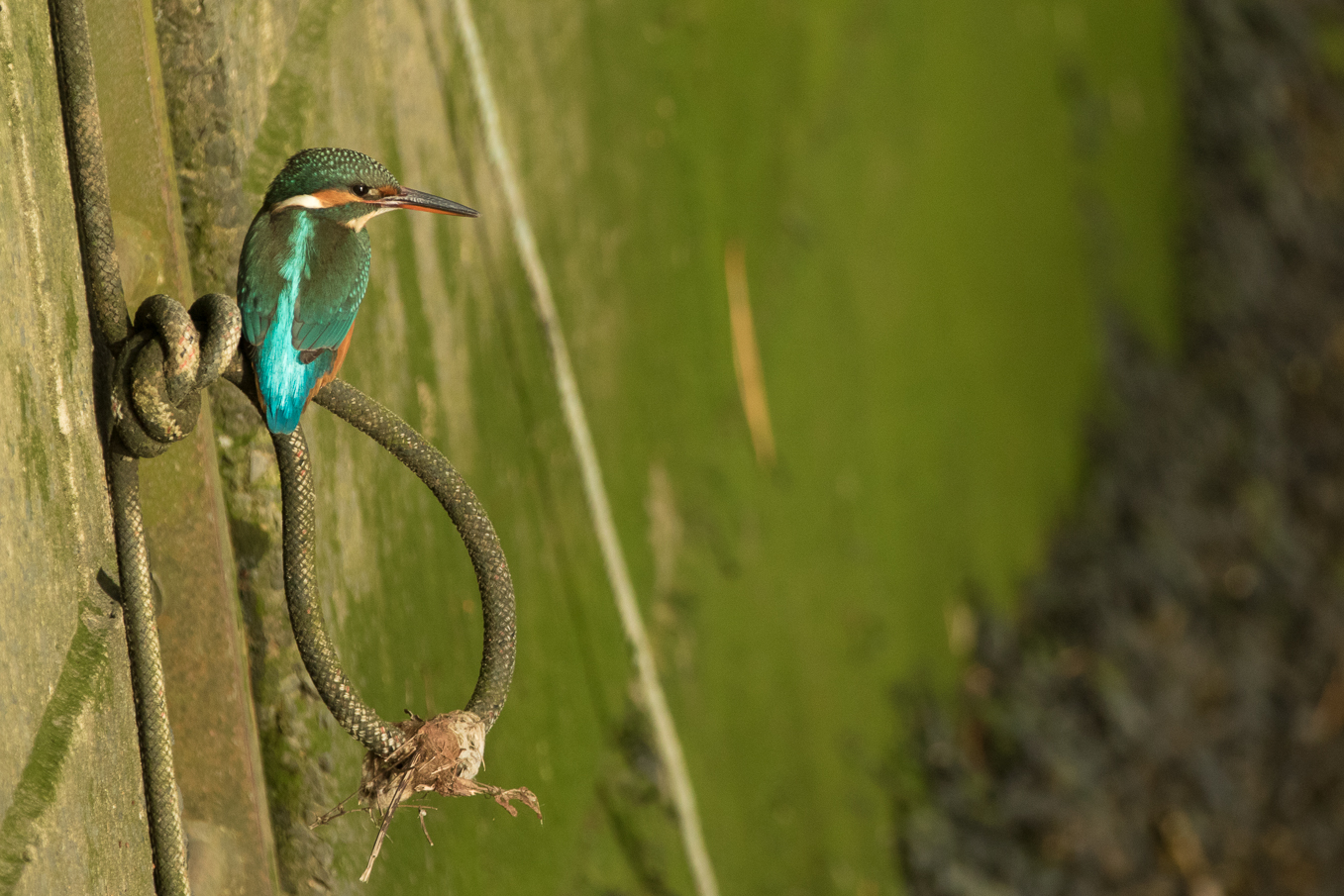 Once you get your ear in you will discover kingfishers everywhere, this one is a regular around the harbour in Aberystwyth.

Good luck finding these sapphire and amber jewels because someone once said that “every day with a kingfisher is a better day than without!” ok I just made that up but it is true!