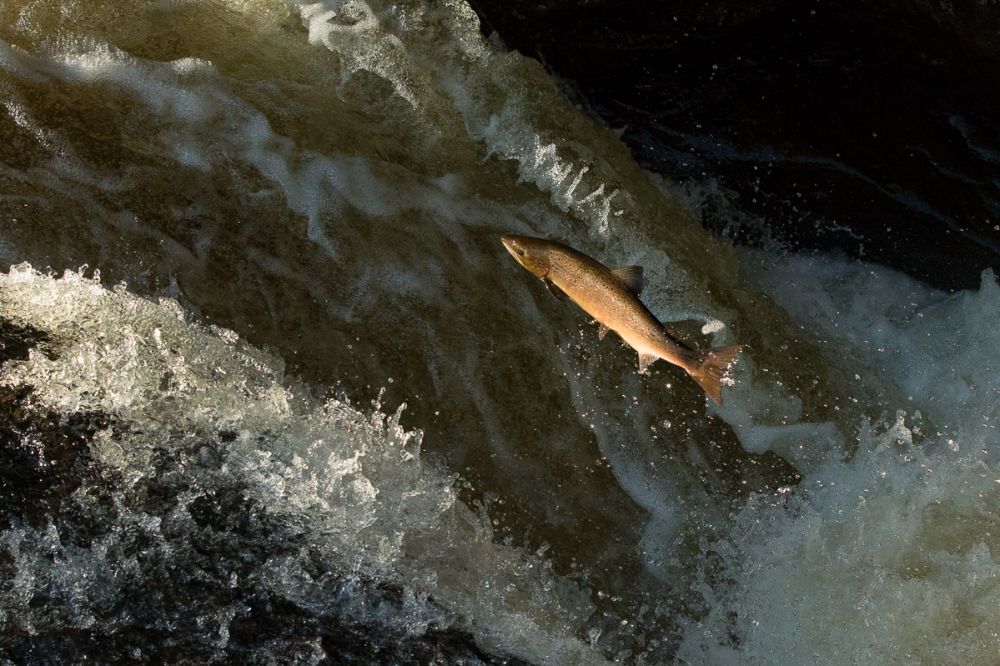 Leaping salmon was on Nick Martin's photo bucket list, here's how he finally achieved it

It has been a long time ambition of mine to watch and photograph salmon leaping waterfalls. I had previously visited a suitable site,  in Mid Wales but conditions had not been quite right. I also tried a couple of sites in northern England but again images were not possible. 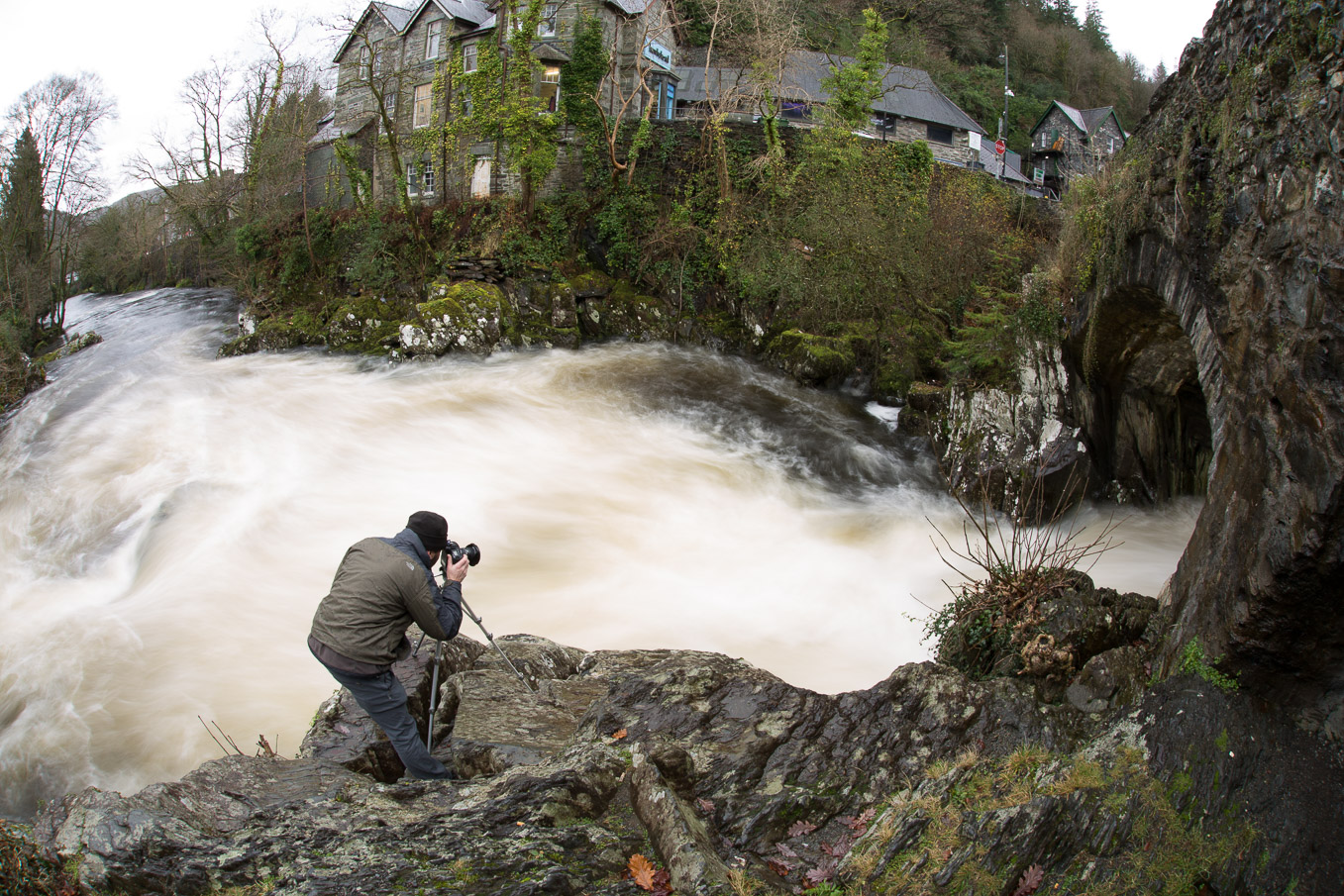 Recently though I struck lucky on an autumn trip to see wild beavers in Scotland. Without planning to doing so, it turned out that I was staying close to one the best places in the country and not only that but the conditions were perfect! 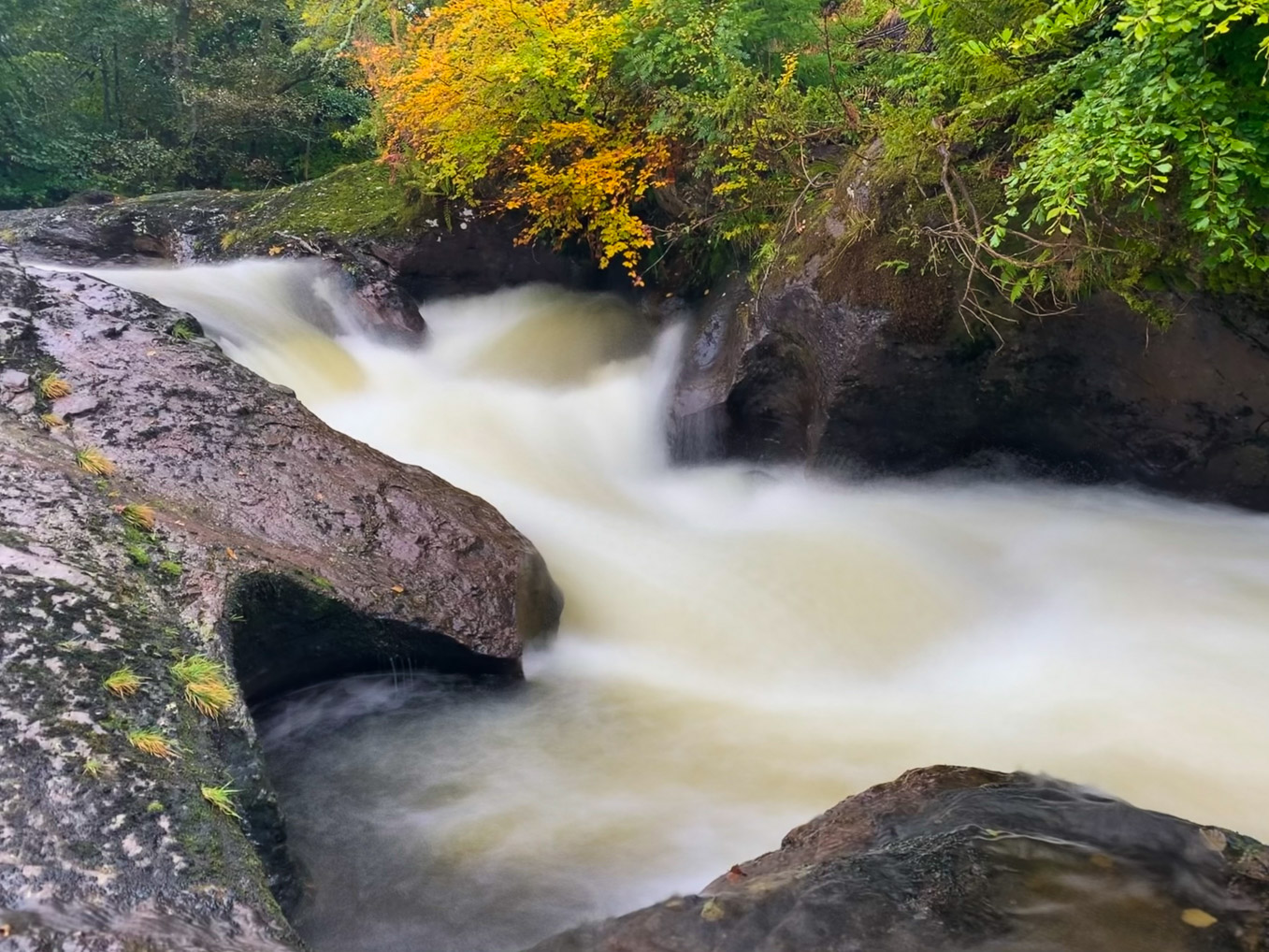 The location of my success was the very beautiful Buchanty Spout on the River Almond. It's not an easy place to find so check the location guide at the bottom of the page. My first visit was in the afternoon on a fine day and there were several other photographers and other visitors crowding around so another time I will get there early and avoid weekends and holidays.

The falls at Buchanty are a dramatic series of cascades as the River Almond turns East. Even without the salmon, it would be hard not to enjoy the beauty of the changing woodland colour above the rushing water. Whilst there I also saw dipper further up river and I am sure that there would be lots of other wildlife to see with patience. 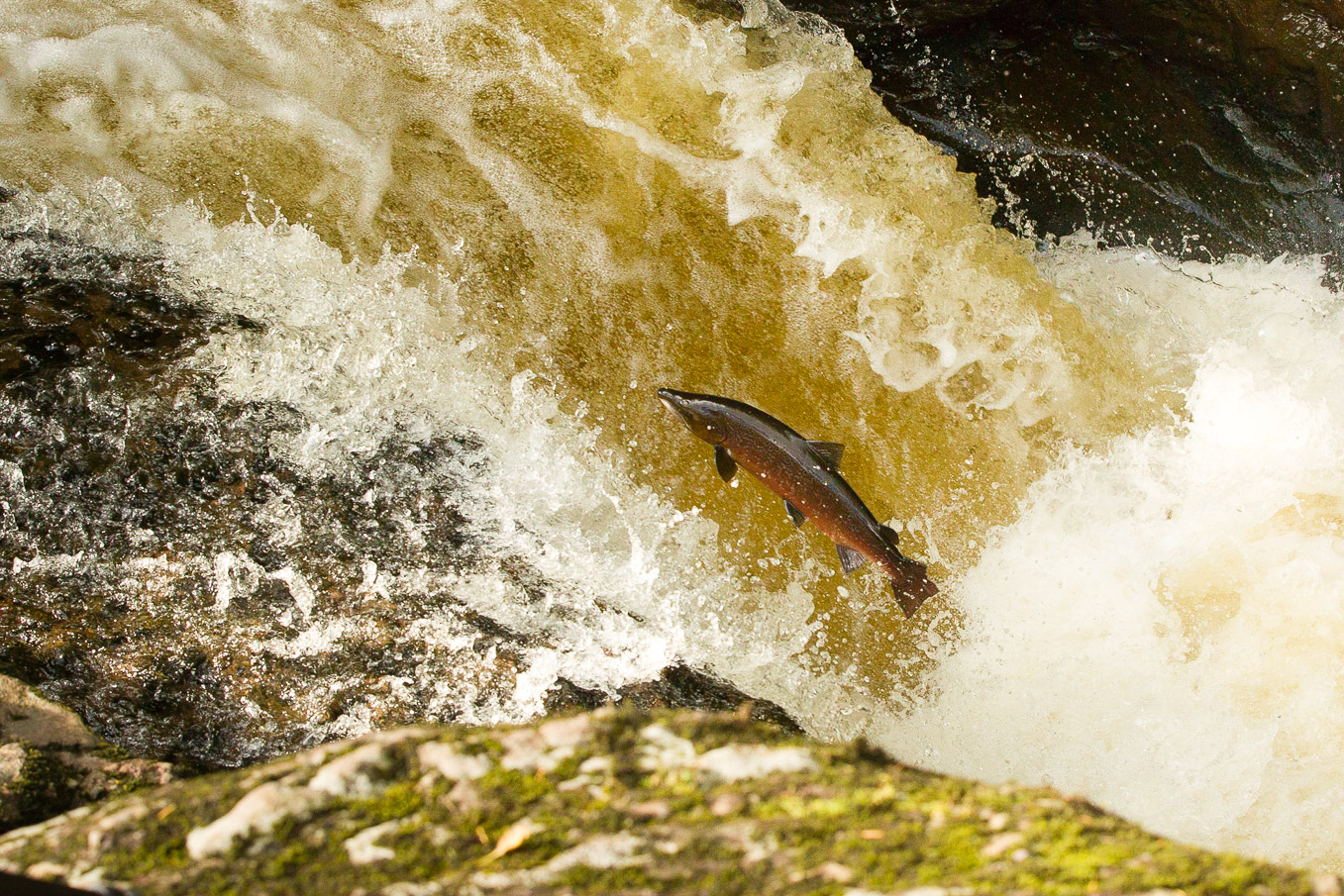 The annual run of atlantic salmon occurs in autumn as mature fish return from the sea to their natal spawning grounds. Driven by the rush to breed, the fish swim upriver doing their best to avoid seals, otters, herons and cormorants barely resting as they swim against the flow. Most of their journey is out of sight of us but when they reach potential barriers such as the falls at Buchanty the spectacle begins. If water levels are low the fish cannot progress and wait impatiently below the falls. As rainfall brings the river levels up this is when the fish leap. Heavy or persistent rain during September and October will be the trigger for the fish to move so it's worth watching river level gauge data online to plan a trip. For Buchanty, refer to the River Almond online live data here: SEPA river levels

On arriving, there was quite a crowd watching on as dozens of fish leapt the main channel. Several salmon per minute attempted to time and aim their effort to traverse the fall. Most failed as they fell short, crashed into the side rocks or even left themselves stranded on a nearby rock shelf! 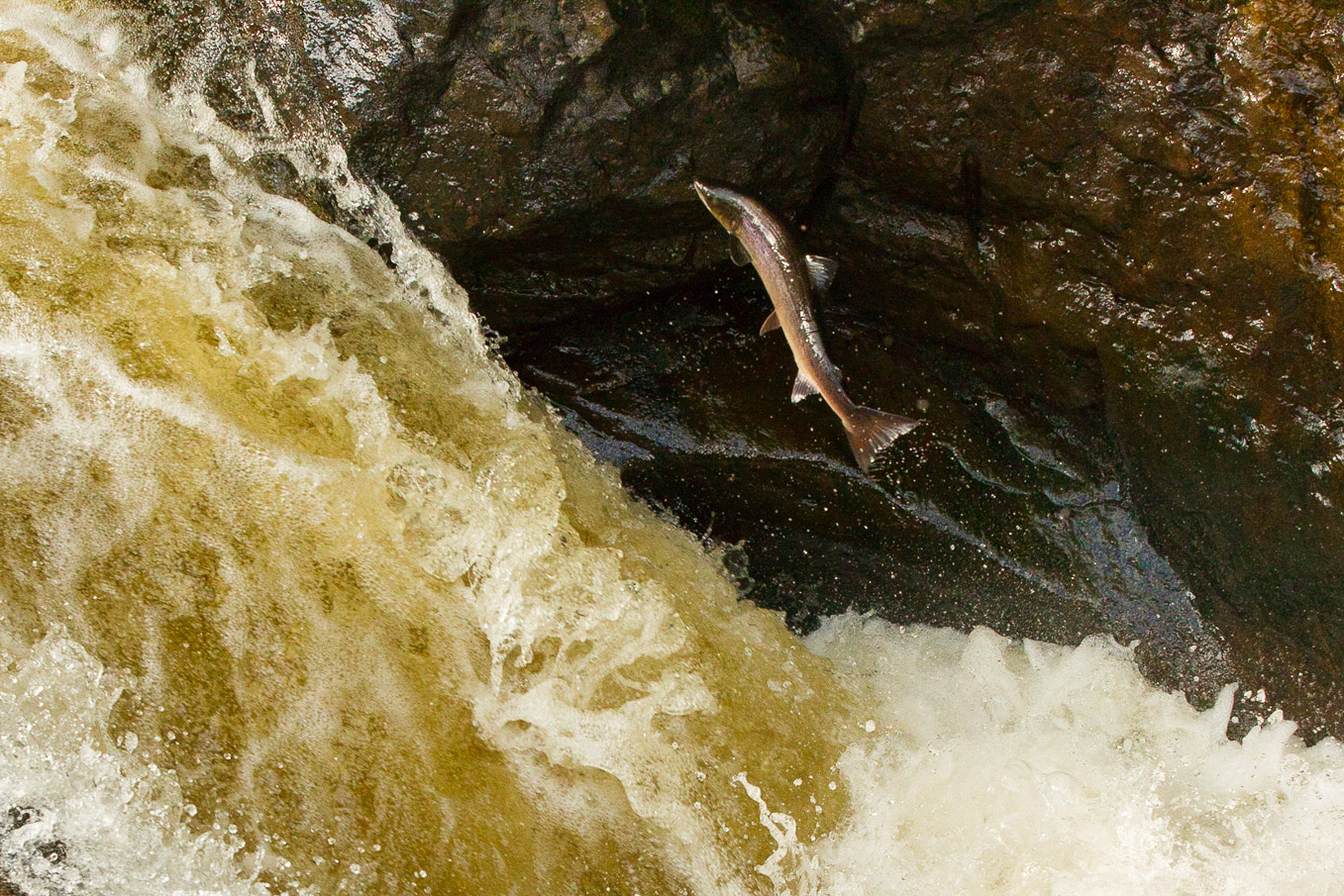 One in perhaps every twenty leaps resulted in success as the fish landed perfectly at the top of the fall and powered against the rushing water to reach the calmer pools above. The winning fish wouldn't have heard it but there was always a cheer from the adoring spectators!

Photographing the fish required a particular approach to ensure the best results. It would have been possible to have hand held the camera with the finger on the shutter ready to capture the fish as they leapt. To my mind though the better option was to set up on the potential route of a likely subject and use a remote shutter. Observing the fish for a while was therefore useful preparation and I watched for fifteen minutes or so concentrating on where the fish were emerging, the height above the water and the route of successful jumps.

Once I had an idea of the likeliest position of fish half way up one of the falls, I positioned the camera and lens on a tripod pre-focussing on this area. To help react to the emerging fish I attached a cable shutter release allowing me to relax and stand in a comfortable position watching for the leaping salmon. Each fish that emerged triggered frantic squeezing of the button (using a remote release also reduces movement on the camera from excited pressing!) and with the camera shooting at several frames per second there was always the chance that one shot would catch it right. Of course many fish were too far back or close and hence out of focus but with so many leaping in the couple of hours of the session there was quite a few that worked out. The best shots were when the sun was out and lit up the stunning patterns and colours of the fish and these are the ones that created a huge grin on my face as I checked through the hundreds of shots later that evening. 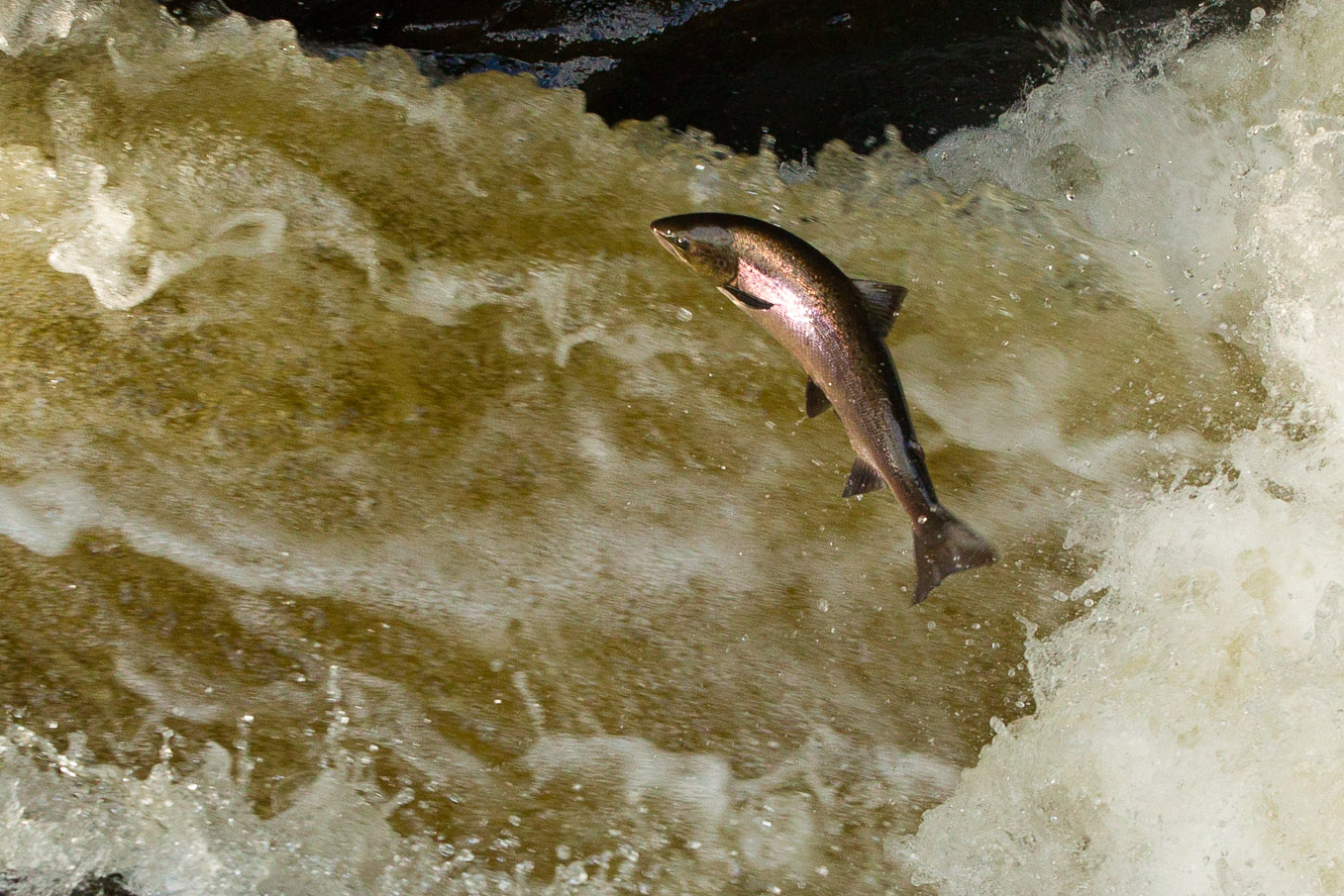 An extraordinary experience that I for one will be looking to repeat next autumn!

About 30 minutes drive West of Perth there is a small car park on the B8063 between Glenalmond and the A822 (the location app what three words gives the location as ///recapture.expand.haystack) The falls are accessed in a couple of minutes via an unsurfaced path from the car park.