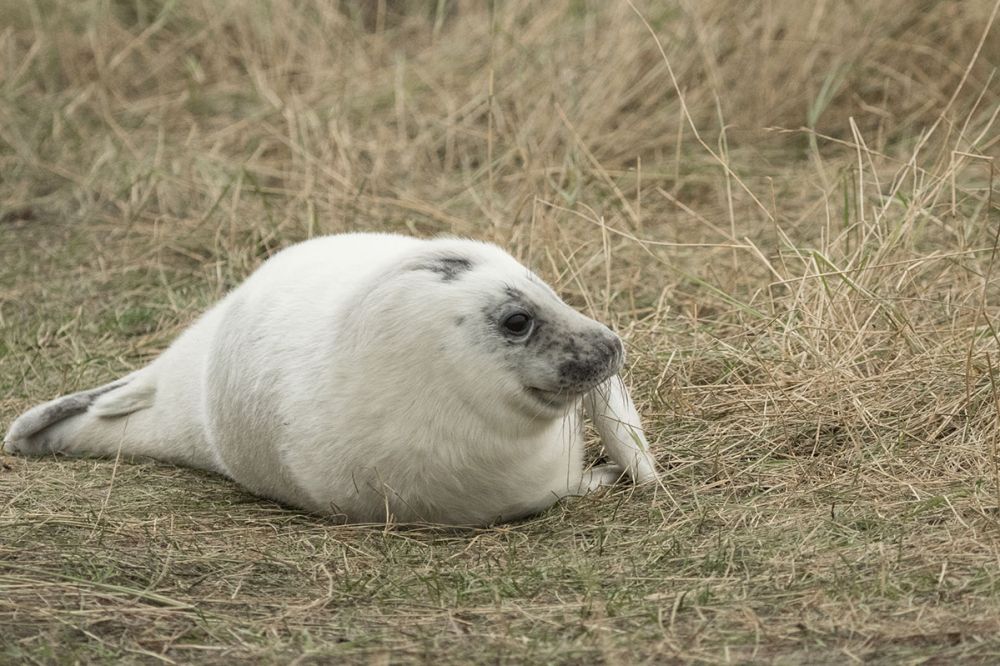 There are many places to see grey seals all around the British coastline but to see them at their breeding colony in early winter there are few better places to get close and watch the action than Donna Nook in Lincolnshire.

Grey seals in the UK are one of natures success stories and already representing almost half of the worlds population their numbers in Britain continue to grow.

There are many places to see grey seals all around the British coastline but to see them at their breeding colony in early winter there are few better places to get close and watch the action than Donna Nook in Lincolnshire.

I first visited Donna Nook in 2004 when it was still a growing grey seal colony. back then access to the beach was unrestricted and you could spend the day there and count the other visitors on one hand. It was a great days wildlife watching and I came away with many photographs and a promise to myself to go back again. Nearly 15 years on and my return trip was another wonderful wildlife experience but to a rather busier site. 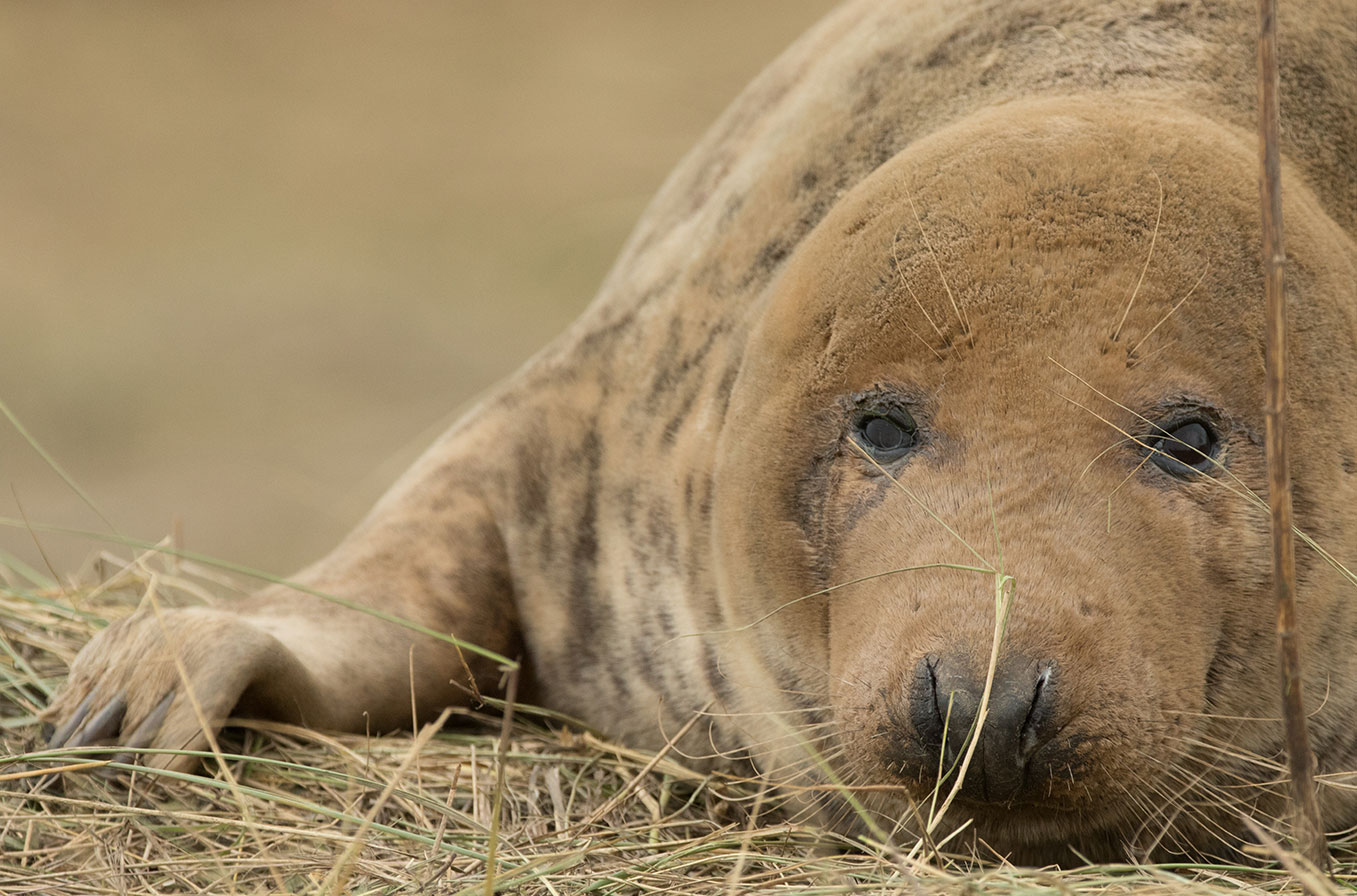 Grey seal cow: This seal called rope neck has been back to Donna Nook almost every year since 2000 when she had a cord cut from her neck by Wildlife Trust Wardens. She may have over 20 pups in her lifetime and could live for over 30 years.

At Donna Nook, grey seal numbers have increased dramatically, with pup births rising from less than 100 in the late eighties to over 2000 in 2018. In parallel visitor numbers have steadily grown over the last twenty years and it was notable how busy it was for a midweek term time day. Chatting to the warden she commented that they had over 6000 visitors in the previous weekend which must have been a real squash. Its testament though to the attraction of one of our largest and most charismatic mammals which in the early winter truly put on a show! 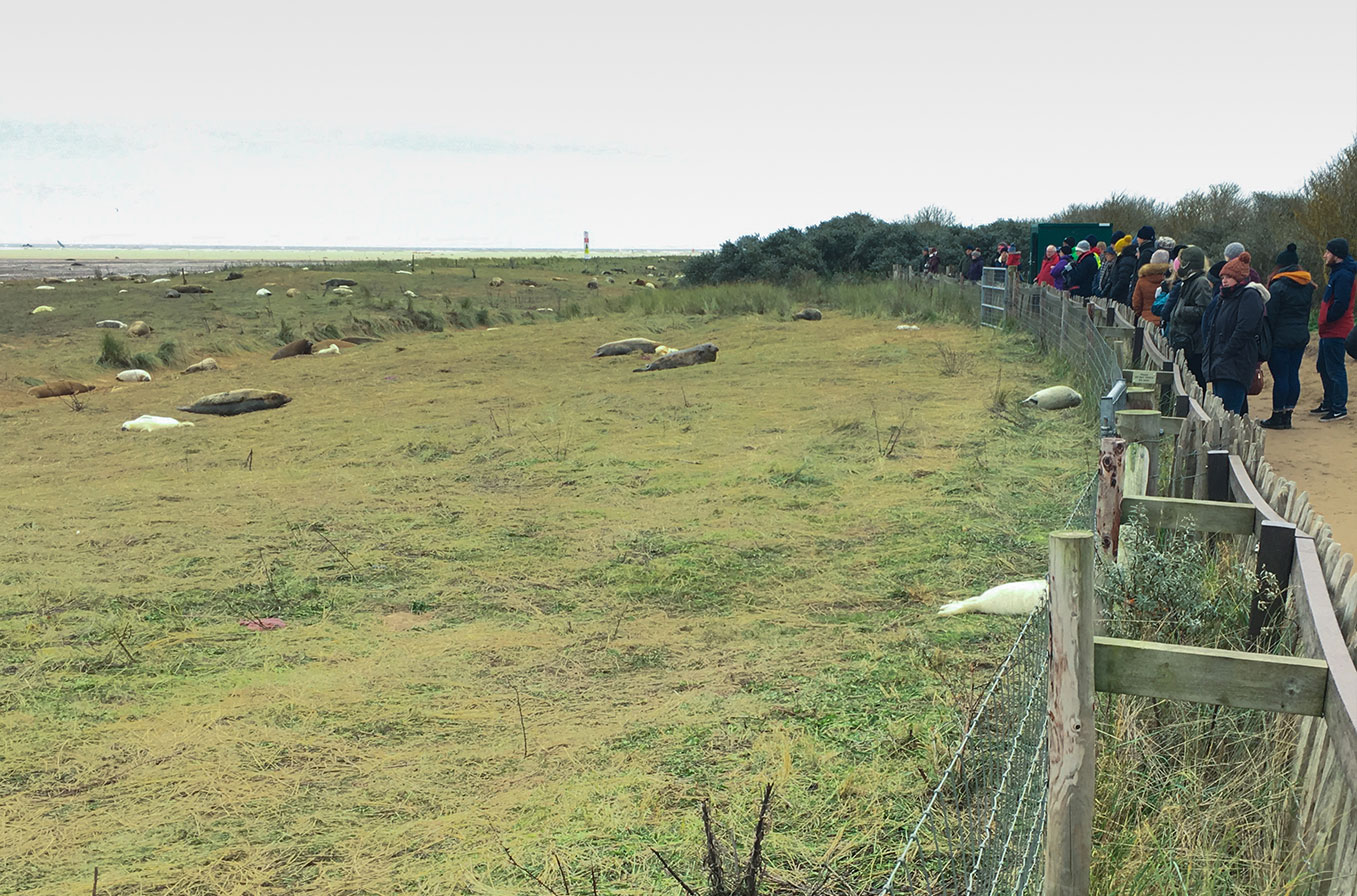 The seals arrive at Donna Nook to breed from late October with numbers and action peaking in mid to late November wand most of the seals having left by the end of December. During this time males (bulls) fight for the right to mate with the females (cows) who in turn give birth to pups conceived the previous year. With around 500 bulls and 1500 cows on the sandy beach and up to the edges of the grassy dunes there are plenty who are very close to the paths where visitors can observe from a wooden fence line. 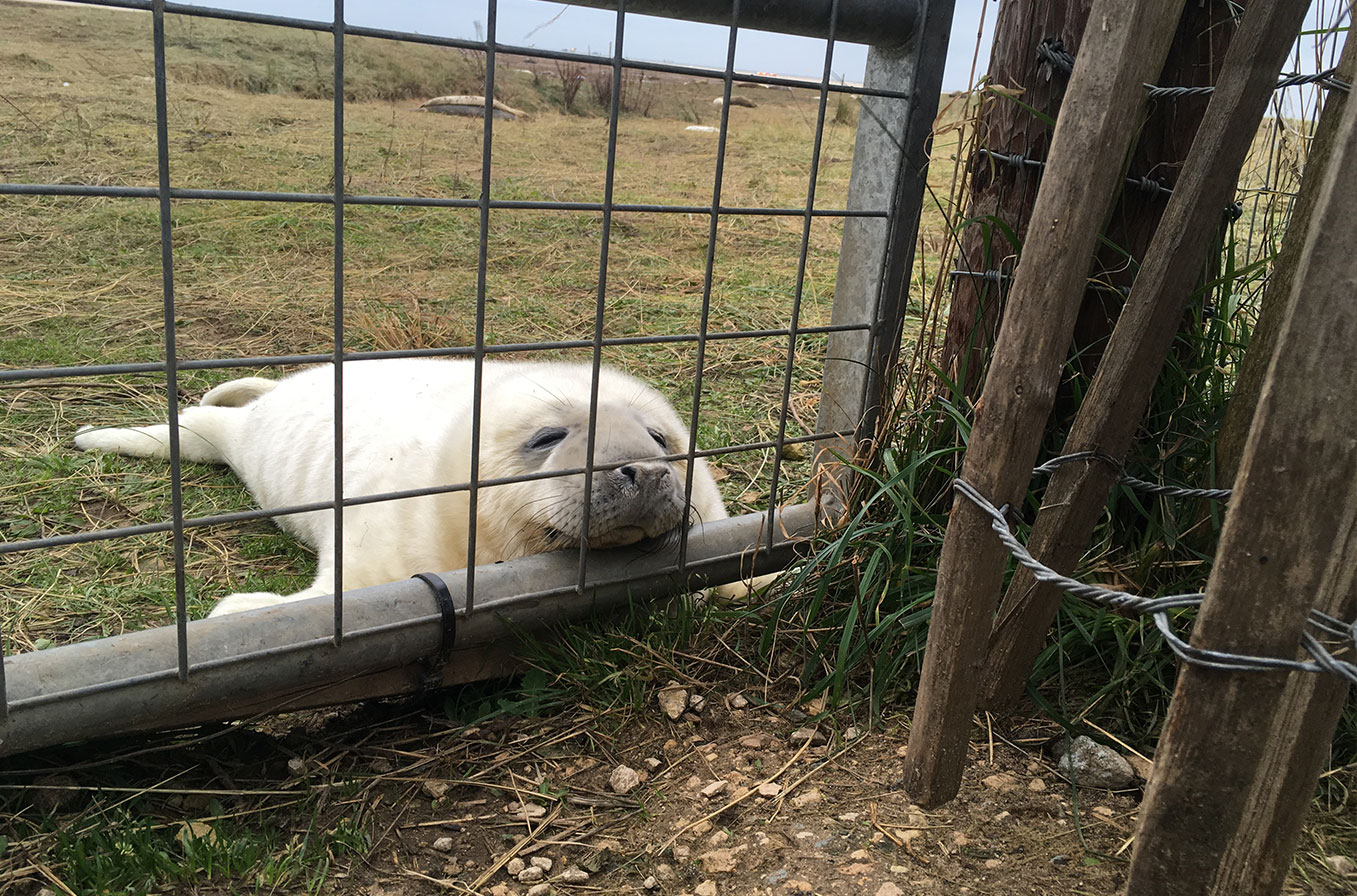 Seal pup by the fence line - Pups come right up to the fence line and snooze whilst adoring school children take snaps on their phones. Females and pups are numerous close by allowing the close interactions to be watched.

Plenty of other wildlife was on show  too with various gulls, curlew, redshank and lapwing feeding on the beach. Little egret, shelduck and brent geese around the grassy lagoons and meadow pipits, yellowhammer and even twite in the dunes and fields behind. The many discarded afterbirths and occasional dead pup also draw in scavengers including surprisingly turnstone. On our visit there was the bonus of a rare pomarine skua which posed for the assembled birders and photographers 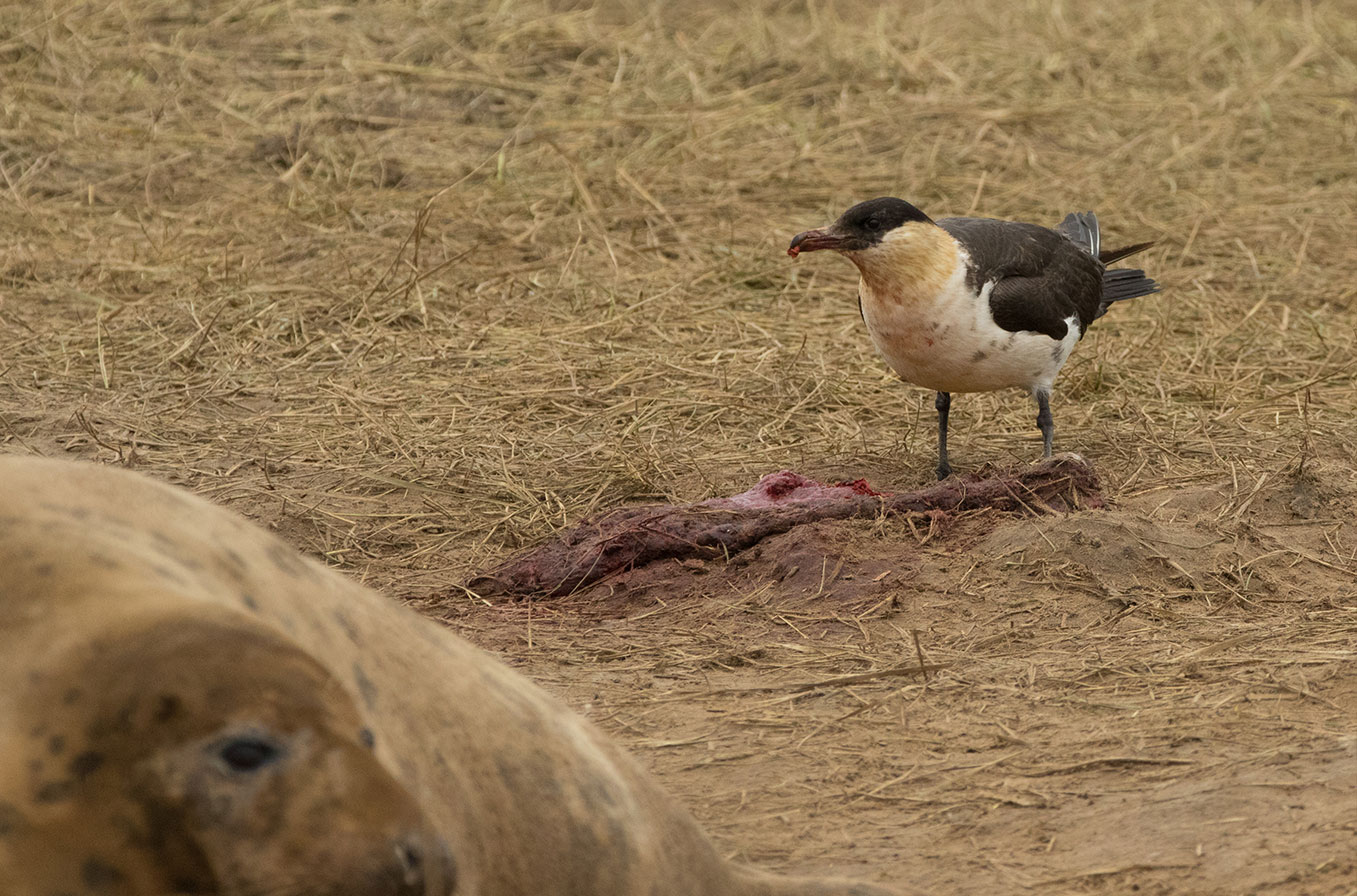 Pomarine skua - A rare pomarine skua feeding on afterbirth, one of many birds adding to the wildlife supporting cast.

The huge 50 stone bulls are spread out through the colony with skirmishes happening frequently at the seaward edge of the colony where lower ranking and younger males try their luck. Dominant bulls fiercely guard females that are in season and will growl and posture towards rivals. Some will sit in pools and slap their bellies on the water surface reinforcing their considerable weight and prowess. If all else fails, fights will be brutal and bites can leave lasting wounds around the mouth, neck and hind quarters. When seeing off the competition the bulls can move with a rhythmical motion and reach surprising speeds across the beach. 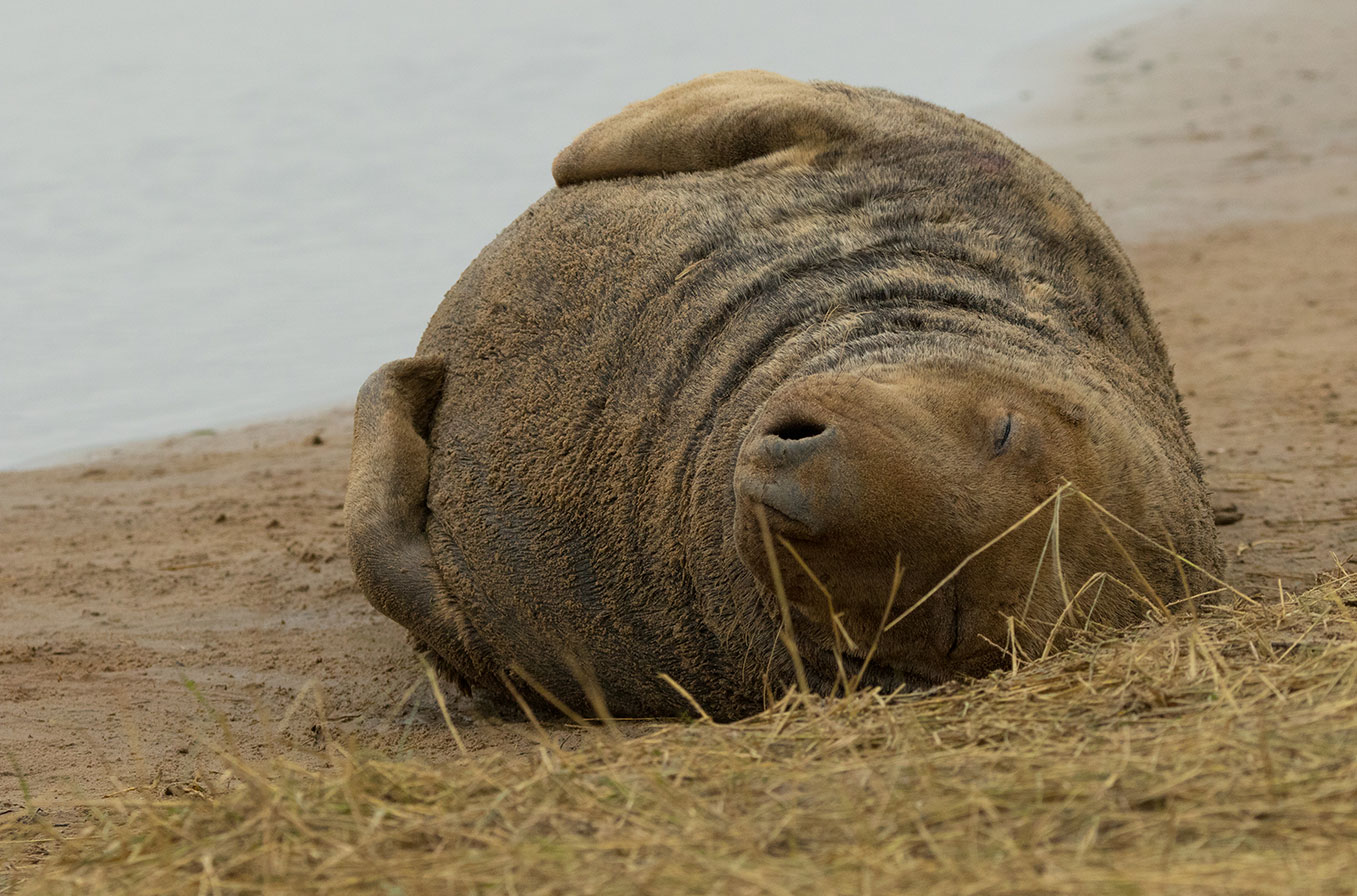 Grey seal bull resting - A dominant bull rests between fights with his rivals.

Heading south there is a dune that rises between the path and the sea, seals on this can more easily be isolated from the background making for more simple and pleasing images.

Look for action, spending some time with a group of seals will be rewarded with interaction between females and their pups, and adult seals who will bare a formidable set of teeth and neighbours and intruders. These can often be predicted and having the camera at the ready will realist in dramatic shots. 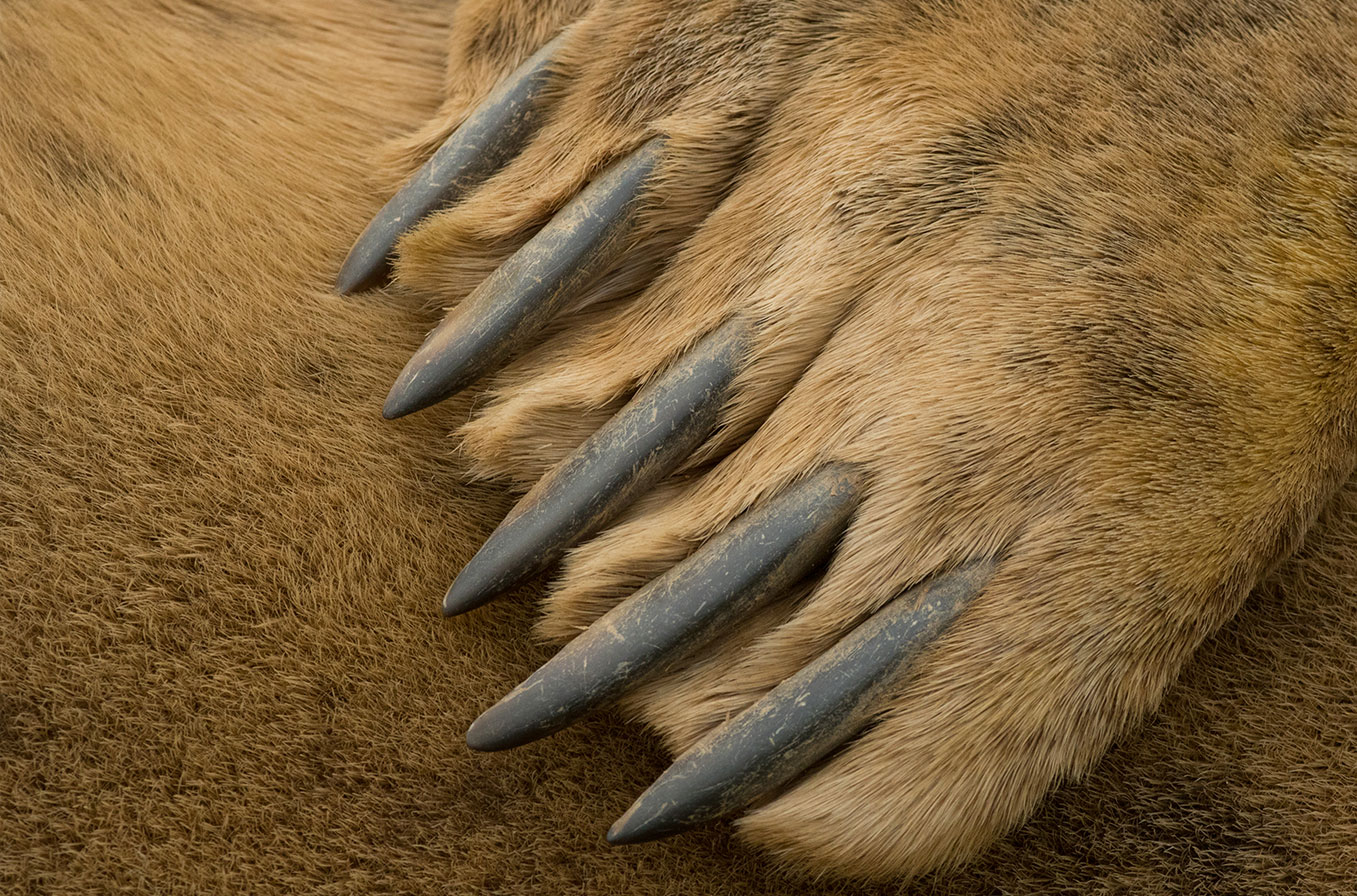 Seal claws detail - Look for close up detail and if your camera and lenses allow try for frame filling images. Seal have tremendously charismatic faces and tight portraits are lovely images.

Grey seal pup - Long lenses can be useful at getting tight close ups of detail and also picking out well positioned individuals further out but many seals are well within the ranges of medium telephotos of 200-400.

Welfare is important at Donna Nook and visitors and particularly over zealous photographers have caused issues in the past venturing out to the outer colony on the beach itself. Disturbance of pups and mothers has contributed towards pup mortality. Unfortunately the actions of the selfish few now means that access to the beach is discouraged meaning the viewing must only take place from behind the double fence line. This does preclude low down images such as those I was lucky to get in 2004 but, with careful positioning and imagination, great seal images can still be obtained. And for the welfare of the now large and widespread colony visitors should all abide by the signage and direction from the wardens. 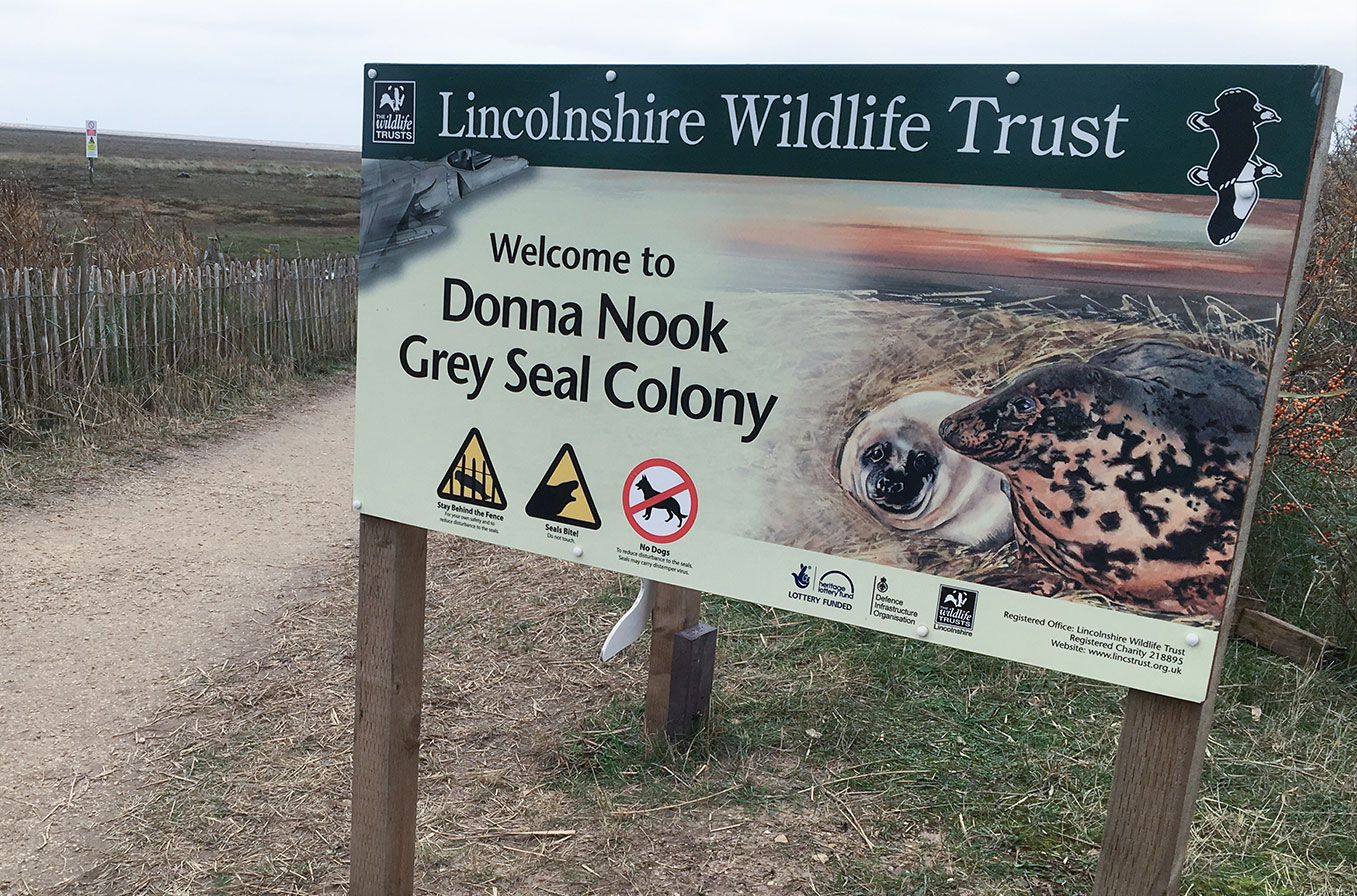 Accessed and sign posted from the A1031 at North Somercotes, the nature reserve is managed for visitors by Lincolnshire Wildlife Trust. Two car parks are available, these are on private land however and there is a modest charge (£4 weekdays and £5 weekends in 2019). Portable toilets are provided and a hot food van is present at both car parks when visitor numbers peak in November and December. Access is across the dunes from the south car park but along a flat path from the northern one. The Wildlife Trust information hut is open each day and volunteer wardens are friendly and informative. Dogs are not allowed past the dunes.

Top tip: the coastline in early winter is very cold, so be prepared to layer up and bring a flask.

Top tip: at weekends and school holidays visit early to avoid the crowds.

Some accommodation can be found in local villages but half an hour away Cleethorpes provides an abundance of guesthouses and small hotels. and winter rates can be very reasonable. We stayed at the Kingsway Hotel which was excellent value for money.