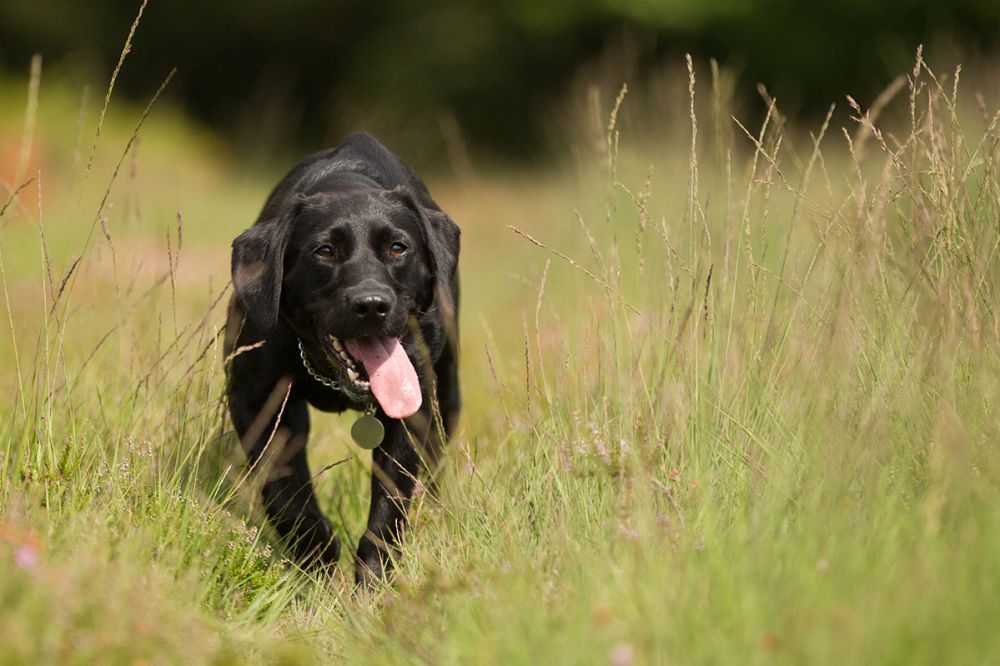 Enjoying the Countryside with your dog

“To sit with a dog on a hillside on a glorious afternoon is to be back in Eden, when doing nothing was not boring - it was peace.”  So said the French writer Milan Kundera and I agree.

Few people would argue that a walk in the countryside is one of the most enjoyable things we can do, not only that but it is good for us, keeping us fit and releasing endorphins. Most folk though would also agree that they don’t get out enough, there’s no time, the weathers rubbish or other things get in the way. A few people of course are lucky enough to have jobs where they are out and about anyway, farmers, foresters and many others that work on the land but there is another large group that get the benefits on a daily basis…dog owners. 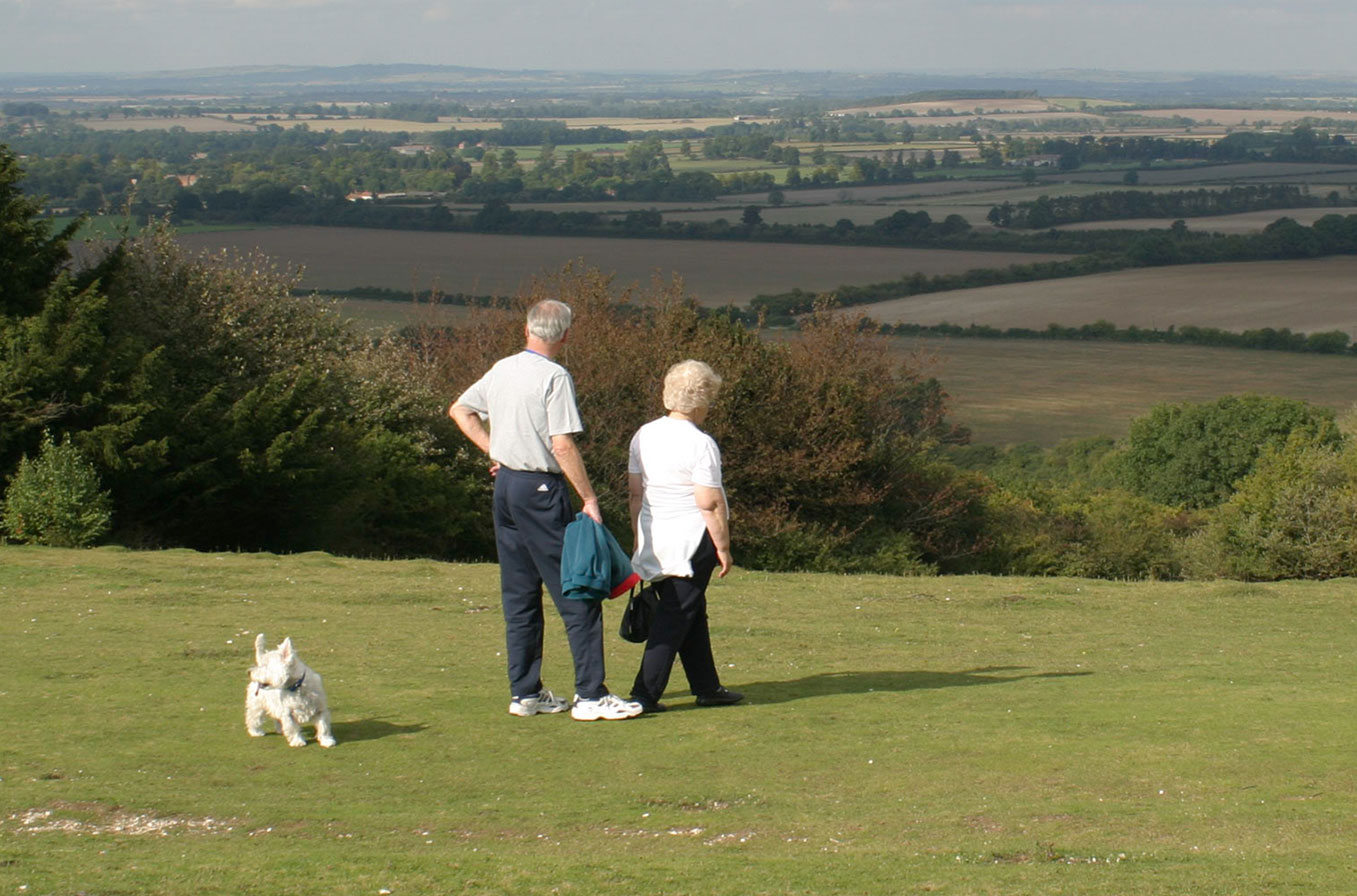 If you are not walking the leafy lanes, woods, and open fields both you and your dog are missing out. Streets and urban parks can be accessible, not muddy, have poo bins and people to talk to but they are a poor substitute for the sights, smells and sounds of the open countryside. Sometimes of course the local park is perfect for a quick lunchtime walk without having to change shoes and chasing the ball for a while great exercise but make sure that you seek out some out of the way footpaths or open spaces at least a couple of times a week. In fact use your dog as an excuse to discover new wild places.

Of course enjoying the countryside with dogs is nothing new and many companion and working breeds are in their element there. My dog Dotty is a springer spaniel bred to flush game to the waiting gun. Bouncing through the long grass or following her nose through the wood you can see her smile from her nose to the tip of her tail! She is happy because she is doing what she was bred to do, she used to be a working gun dog but even untrained spaniels, collies and hounds default to the behaviour that their breed was developed for. For this reason its imperative that owners understand the breed and its traits. If you want to have a 30 minute high energy walk followed by several hours of rest then a grey hound is the way to go, a three hour romp through the fields and meadows might need the endurance of a pointer. 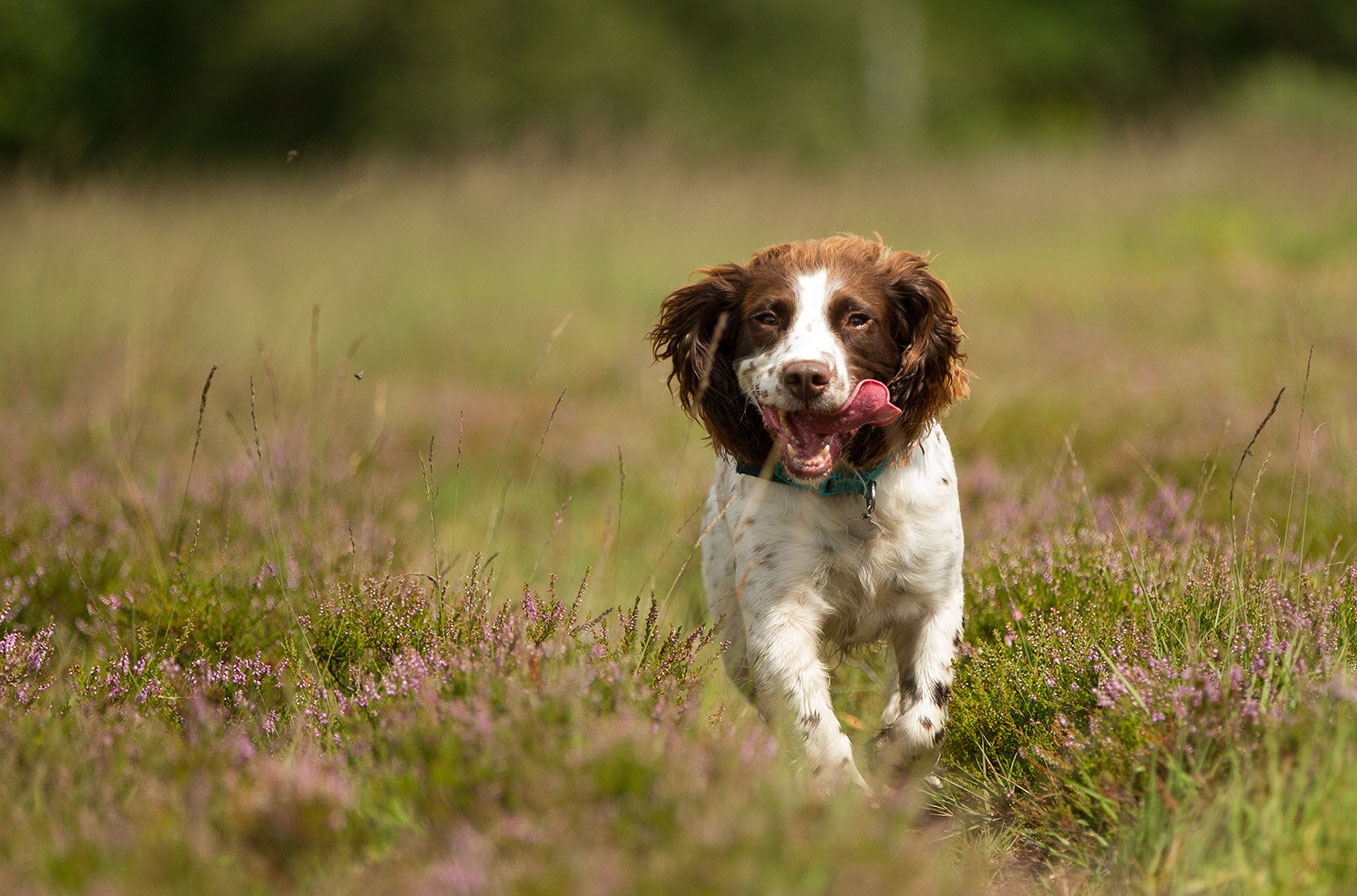 My springer spaniel 'Dotty' in her element.

Taking a dog to the countryside comes with responsibility and knowing your dog is vital. Some breeds were trained to hunt game and exercising them off lead must be done knowing that they will come when called and also that there is less chance of surprising an unwitting, rabbit, deer or squirrel. Lurchers and other sight hounds are well known for their speed and are perfectly capable of catching and injuring or killing wildlife but any dog can disturb animals and birds if loose in the wrong environment. A friend of mine often recounts with shame the time his cockerpoo caught and ate a redshank chick! 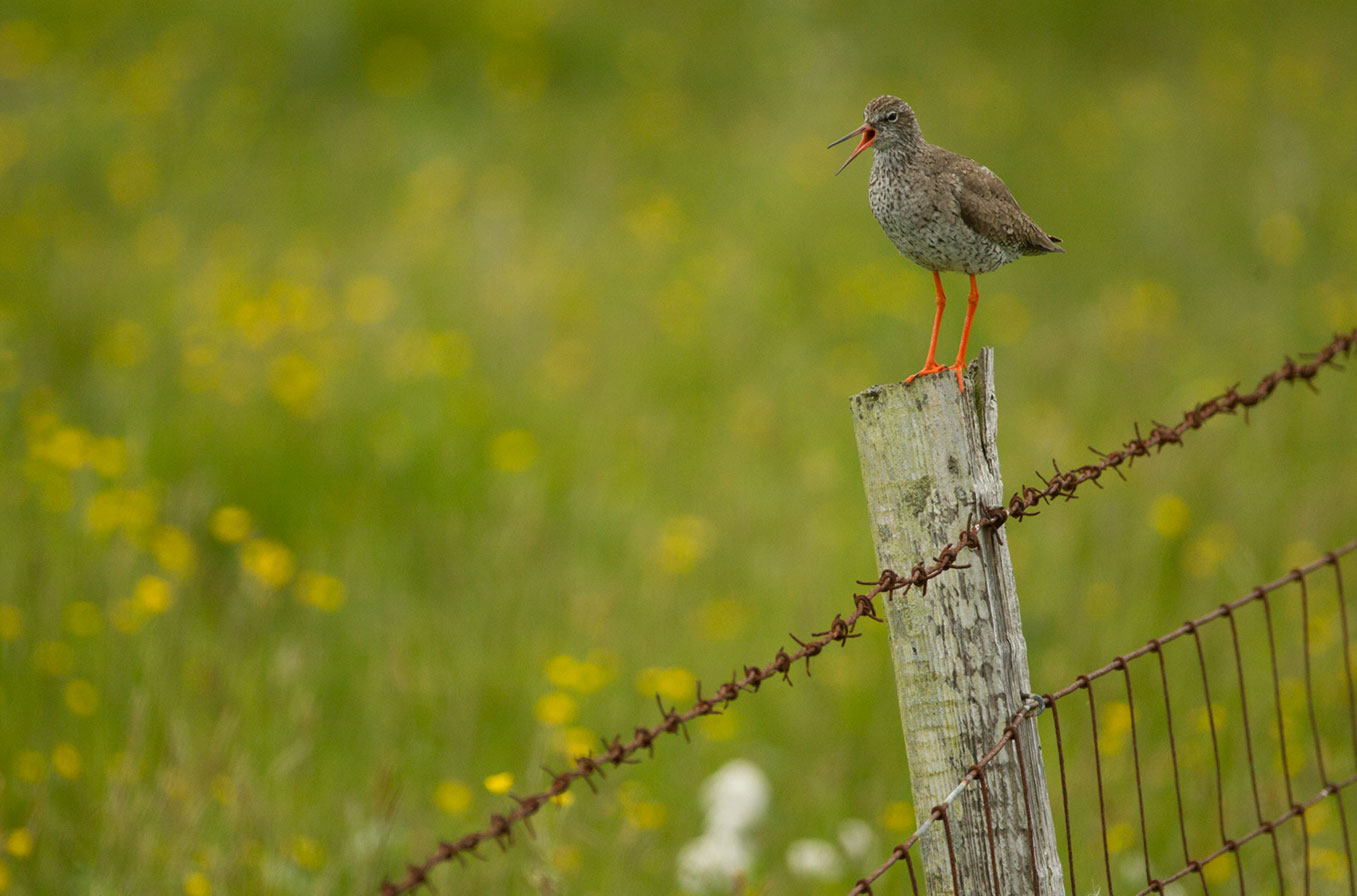 A bird alarm calling like this one is a clear sign that chicks are around and its time to bring your dog to heal or on the lead.

Going where other people often walk dogs will ensure that the wildlife that lives there has some element of robustness to their presence. No roe deer for example will leave its young unattended where the smell of dogs is strong. If you are off the beaten track however then understanding what might be around and vulnerable is also important to avoid accidents. Many woodlands, heathlands and open fields will host ground nesting birds in the spring so best avoided or keep fido close at hand. Beaches too will be the favoured breeding area for terns and plovers and loose dogs can cause havoc as parent birds desert the nests leaving eggs and chicks vulnerable to gulls and crows. Many sensitive sites have signs so always respect these and even if your dog is disinterested in leaving your side set a good example to other walkers by using the lead if directed.

Sometimes the tables are turned and dogs can themselves be the targets of aggression. I have seen red deer stags chase loose dogs and several sites in the UK now host populations of wild boar, sows with piglets will not tolerate dogs and will charge and attack them. It’s not the fault of the boar or the dog in this situation but down to the owner to avoid conflict. Domestic livestock can also be an issue and walkers can sometimes get into trouble with cattle especially with calves present. In this situation a calm dog on a lead giving any animals a wide berth will usually avoid incident. Should cattle charge you and your dog stay calm but take the dog off the lead so that it can run to safety and most likely lead the cattle away from you. If you are not sure of your dogs behaviour out and about, err on caution and especially in the spring plus always abide by signage that asks for dogs to be on leads. 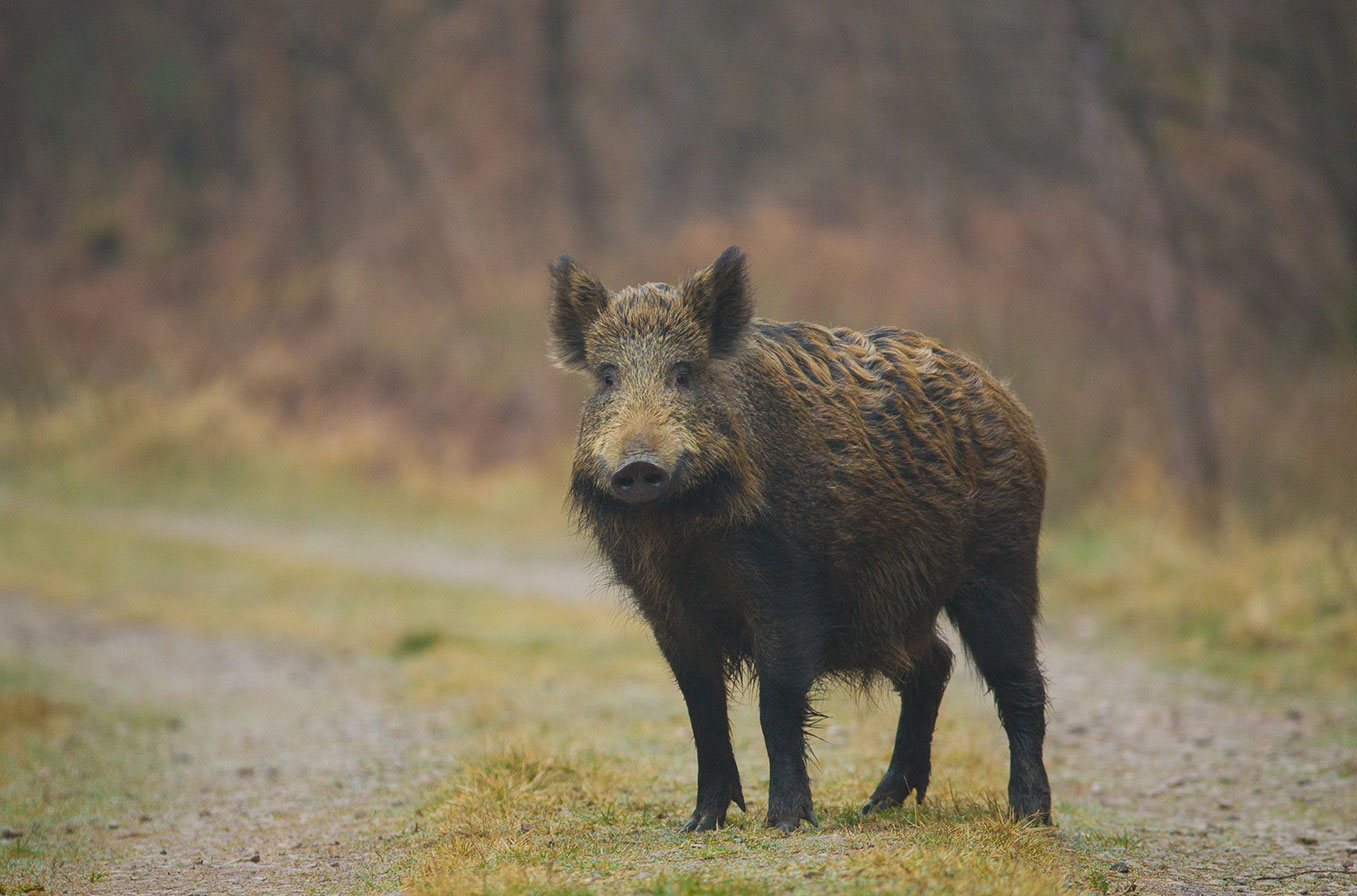 In some parts of the UK will boar can be encountered so keep dogs under close control if you suspect they might be in the area.

A rather smaller but common animal that will attack your pet is the tick. These tiny spiders can be picked up from vegetation and will happily lodge themselves in your dogs fur whilst gorging on blood. They can carry Lyme’s disease which is very serious so checking fur should be done regularly and especially if walking in areas where sheep or deer frequent. Keeping up with the relevant vaccinations and boosters is wise and investing in proper tick removal tools would be a wise investment for only a couple of pounds.

Alabama rot is a canine disease that has been linked to muddy woodlands and if areas are known to have it occur its worth avoiding them. The signs include sores on the paws, legs or face so if your dogs shows these or any other signs of being unwell it is worth getting to a vet quickly as the disease can be fatal.

Water can be a magnet for dogs and it is certainly enjoyable for owners watching their pooch having fun in the lake or river. Be sensitive to wildlife here too though and be especially careful near swans and geese as they can be very aggressive towards dogs in the water. I have seen cob swans attack even quite large dogs and they have the potential to injure or even drown smaller dogs. Be aware of strong currents and tides too and avoid static water such as canals and reservoirs where Weil’s disease and toxic blue green algae can accumulate. If your dog does find itself in stagnant water it is a good idea to rinse with clean water as soon as possible as licking the fur or ingestion of algae can be very harmful.

Picking up poo is one of the least enjoyable parts of being a responsible dog owner but something that we all have to take a deep breath and do. Being in the countryside is not a let out clause for this as the poo can still be unpleasant for others, damage the flora or even be a danger for other animals or people. The Forestry Commission and some other site advocate the stick and flick method of moving poo off the path but the Kennel club and many others say pick it up wherever you are. Either way please don’t join the growing numbers of dog owners who bag it and hang it which is the worst of both worlds and generates justified anger towards the dog walking community. 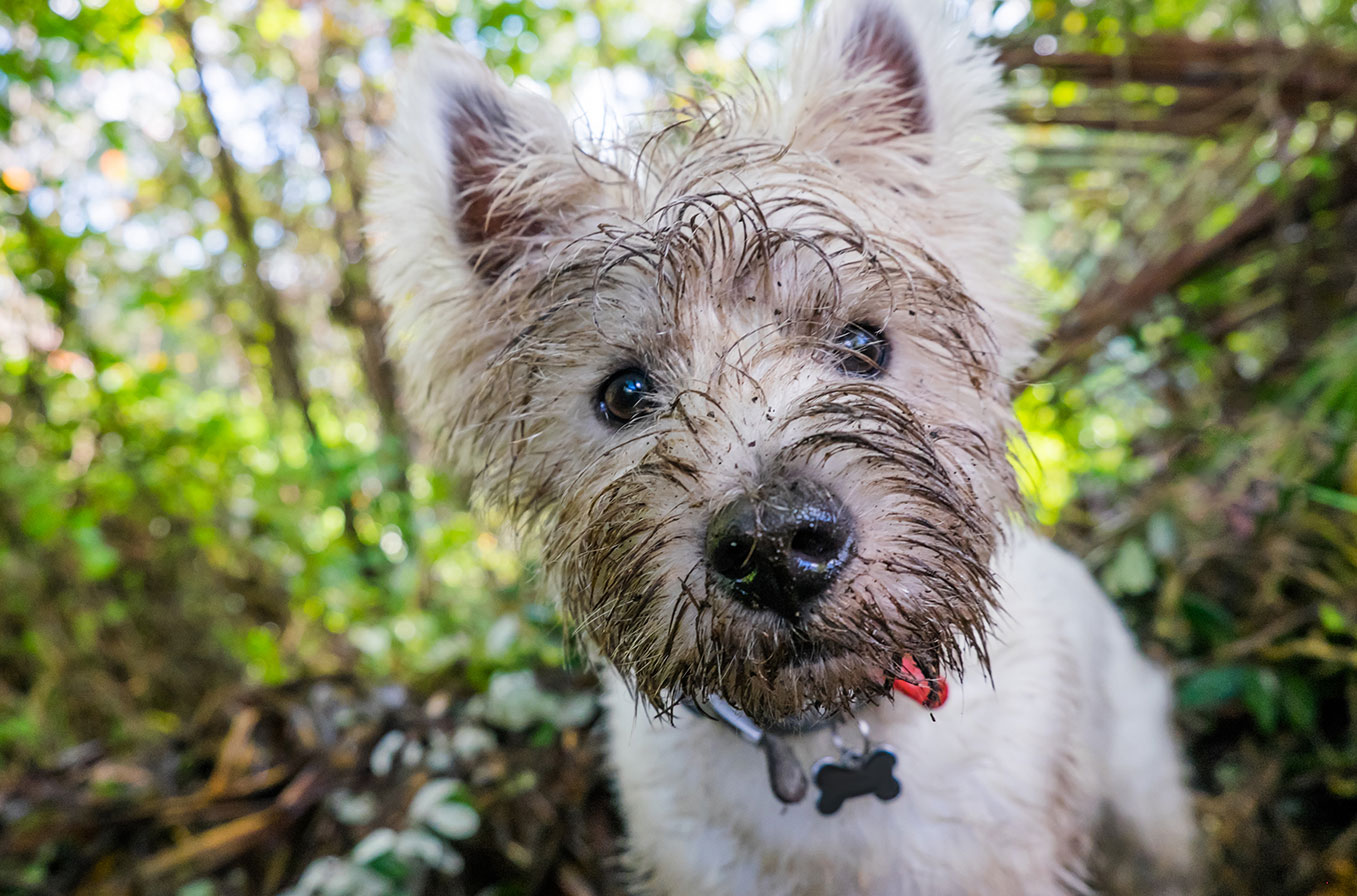 Get out into the countryside and your furry friend will love you forever! (shutterstock)

Finally, one of the problems with the countryside is it does tend to be full of earth and water, mix with a dog and you have something that you would rather not put in your car or house! Do not despair though as necessity is the mother of invention and the issue have been improved by many dog loving manufacturers. Absorbent rugs for the car and drying coats for the house are amongst the wonderful products available to dry off fido after the mud spa session.

The few negatives aside walking a dog in the countryside is one of the best activities we can do and taking on board a few of the tips I hope that you can enjoy it too. Myself and Dotty will see you out on the trail!